George Herman was an American baseball player who played for The Boston Red Sox and New York Yankees. On his passport, his height was listed as being 6ft 1.5. 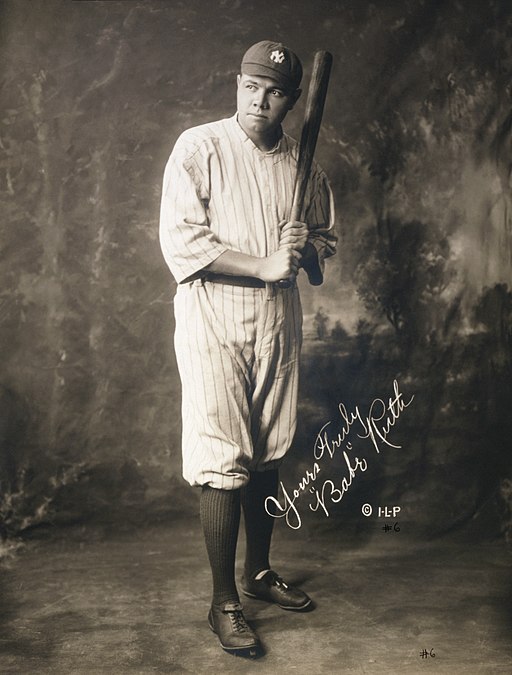 Average Guess (16 Votes)
6ft 1.45in (186.6cm)
Canson said on 26/Oct/20
@Viper: I wouldn’t believe Bregmans listing either
Canson said on 26/Oct/20
I can believe 6’1-6’1.5 range peak. Probably around 186
Bradley said on 23/Oct/20
My father met him many times outside the stadium when he was in high school. 6' 1" it is.
Mike L. said on 18/May/20
Babe Ruth was definitely a big guy. However, came across a picture of Babe Ruth with baseball player Dizzy Dean, who was reportedly about 6’ 2” or 6’ 3”, and Dizzy appeared to be approximately 3-4 inches taller. They were both wearing their baseball uniforms, so I don’t think there was any footwear advantage for either person. Therefore, I think that Babe was about 6’. Am an admirer of Babe Ruth’s amazing career and was actually somewhat surprised by this picture. Am only reporting it for the sake of knowledge.

Nearly 180cm guy said on 7/Jan/20
I found some interesting photos of Babe next to George HW Bush from 1948, Rob I think you should look at them: Click Here Click Here Click Here
Bush was only 24 at the time, so he was very young, and Babe was 53 years old a few months before he died. I wonder if he could lose some height before he died, but even if I can't see Bush shortet than 6'2.25". Rob, what would you say about these photos?

Editor Rob
Well I can understand the 6ft 2 and change estimates for Bush. He came out with 6ft 2, but was he dropping a fraction and not bothering about it? It's always possible.

Average is 5-11. You can really tell by going to a baseball game and sitting down near home plate. You can really get a good gauge of their real height. Guys routinely upgraded by 3 inches.

al001 said on 27/Sep/19
@Ian C.
Sorry mate but you clearly don't know a lot about baseball if you think baseball today is the same as it was in Ruth's time. It's almost completely different. In the 30s pitchers tended to throw 81-86 mph, and today its extremely common (almost required) for relievers to throw in the mid-high 90s. Today the average high school senior can throw 80 mph, and the difference between an 80 and 90mph fastball is night and day. It requires a very different and arguably more advanced skillset to be a good hitter at those speeds, not to mentioned more complex offspeed pitches. Also back then games were much more focused on getting men on base and scoring from weak hits, while today most strategies revolve around getting big hits and home runs. The players themselves are much different today as well. In the 30s the average player was around 5'10 whereas today they are around 6'2. They also have access to state of the art training facilities which give them a physical advantage over their historic counterparts.
Canson said on 23/Apr/19
@Bobby: he may have just been a strong 6’1” like 6’1.25 at a low
bobbh3342 said on 21/Apr/19
either ruth is 6'1 or ted williams is 6'4 because teds got a lot on him
Dusty said on 21/Oct/17
Hey where's the 5 foot 6 Jose Altuve
TJ said on 7/Oct/17
Rob do you do other baseball players?

Editor Rob: not really got many on here.
Slim 6' said on 6/Oct/17
As listed.
Tall In The Saddle said on 11/Mar/17
There are a ton of photos with Babe Ruth and Jack Dempsey, the two biggest names in American sport during the 1920s. Jack Dempsey was 6 ft 1/2". In every standing photo with Ruth, Jack Dempsey, the Manassa Mauler, is the taller of the two. I would say Babe Ruth was 6 ft tops.
Ian C. said on 24/Dec/16
I'll tell you the truth, Rampage, I don't really know that much about baseball, but it is my understanding that the balls and bats have remained unchanged for over ninety years. Maybe the pitching mounds have been raised or lowered. The ballparks have always been of various sizes, so it is easier to hit a home run in some parks than others, but the game's particulars have been kept fairly constant. I can't see how pitching could have changed that much, since the act of throwing a baseball is basic and simple, and there can't be much that can be done to make the ball go faster or curve more sharply.

Baseball records tend to be remarkably durable. I think Mickey Mantle still holds the record for the longest ball. Nolan Ryan's fastball is still close to the fastest ever recorded. What I mean is, training and technique are dominated in importance by raw talent. Roger Maris broke Ruth's season home run record while smoking and guzzling beer every day of his life. Mantle was one of the most successful batsmen of all time, and an habitual drunkard. Training can't have much to do with success in baseball when men can break records in it while abusing themselves like Hunter Thompson. (I'll have to concede that steroids have greatly improved some players' performance, but even the steroid boys can't equal Ruth, whose performance enhancing drug was beer.)

Ruth was just God's own baseball player. I doubt if he worked at it, or even thought about it all that much. He just had the talent.

Josh Jeffords said on 17/Nov/16
I a bit surprised he was small as a child but heavy.
Then he sprouted to 6 1 or a rapper 6 3.
6 6 seems crazy what little evidence is out there suggest 6 foot to 6 2.
There were taller folks than him when he was you before he got fat.
He was one of the best all time no question modern drug athletes don't compare.


Sam said on 6/Apr/15
Yeah, played by John Goodman so gives the idea that he was a mountain of a man, but a bit of an underwhelming biopic.
Arch Stanton said on 6/Apr/15
Brad, assuming it's the same one as Bieber page, is 6 ft 6 I think, and he's not one of the fake "I'm 6 ft 6" type posters either. He really is.
Gonzalo said on 6/Apr/15
A couple of inches shorter than Gary Cooper in The pride of the yankees. 1,87 seems accurate for Ruth
jtm said on 5/Apr/15
thought he was shorter.
Jack said on 4/Apr/15
Never thought I'd see a baseball player on here. What made you decide to add him, Rob?