American actor and comedian best remembered for appearing on The Ghost & Mrs. Muir, The Dean Martin Show and as a panellist on The Match Game. He once was quoted in an interview saying in his younger years "I was six foot four" 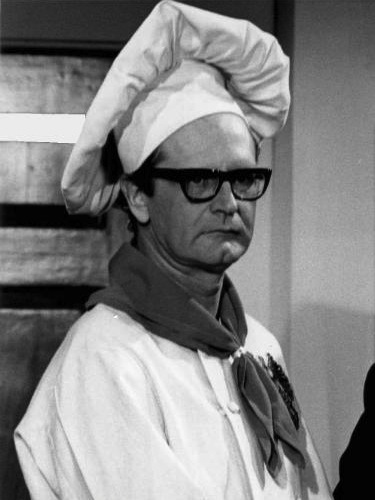 Could he have been one of them? I suppose it’s not impossible. It’d be very hard on the eyes to see this guy stand next to measured 6ft4 individual and try to claim it....but then Dean Martin claimed 6ft1 with a straight face so I suppose that gave Charles enough confidence to embellish his already respectable stature...maybe he wore lifts aswell

Editor Rob
It always seemed hard to imagine Charles near 6ft 4. However, with Dean he could look quite tall!


Maybe in certain shoes could’ve been close to 6ft4

Editor Rob
I am not so sure he really was that tall.

Editor Rob
Well it's an episode of each, but he's the focus of the story in both. He had a few inches on Lance henriksen who at that time must have been around 5ft 8.5
Sandy Cowell said on 24/Feb/19
With just one look at his funny hat and his cub scouts' tie, it's not difficult to tell that Charles is some kind of comedian!

My Mum used to watch 'The Ghost and Mrs Muir' when I was little. I watched it once and was thoroughly disappointed - there were no proper ghosts in it and I never bothered with it again! To this day, I have no idea what it was about!

I will go along with Rob's 6ft2. Someone should tell him you can't include the hat when you're measuring yourself!

Editor Rob
His 6ft 4 claim does seem hard to believe, but he did have a good advantage over Dean Martin back in his prime, so it's not hard to believe near 6ft 2...by the 90's, when he was guesting in say X-Files or Millenium, he was struggling to look 6ft.
Celebrity Heights A-Z
A
B
C
D
E
F
G
H
I
J
K
L
M
N
O
P
Q
R
S
T
U
V
W
X
Y
Z
Random Celebrity
Latest Star Heights