New Zealand Mountaineer and Explorer, known (with Tenzing Norgay) as being the first men to conquer Mount Everest. Several biographies have mentioned his height, saying "Hillary started to grow rapidly at age fourteen; five inches one- year and four inches the next, until he reached his full height, an imposing six feet two", another "Sometime in his early teens, Ed had a growth spurt that eventually took him all the way to six-foot-three" and a 1990 biography "By this time he was six feet, two inches (188 centimeters) tall and weighed 190 pounds (86 kilograms)". Sir Edmund himself mentioned his height in one of his books: "They'd obviously been designed for midgets and couldn't cope with our six foot two". 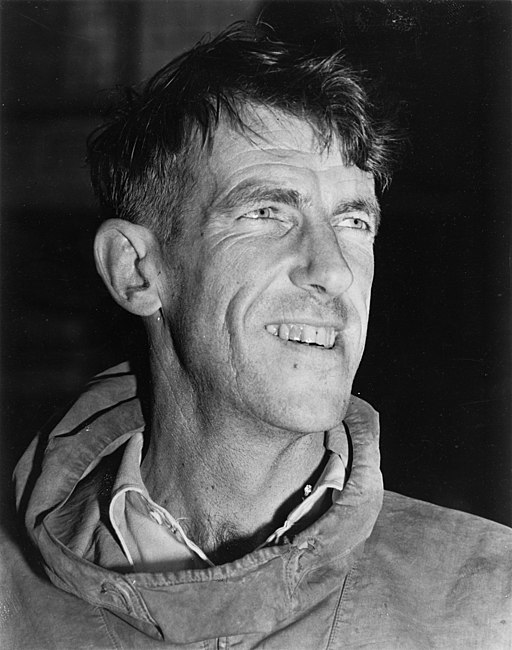 With my height of 6 ft 2 in. and weighing nearly 190 lbs I played in the forwards [rugby].
-- Nothing Venture, Nothing Win

He looks barely if at all shorter than Hillary in that expedition photo yet he’s only listed 6ft on the web. Definitely not 2in between them. Maybe 1in tops in that photo if Hillary didn’t tip his head slightly...he’s clearly got the bigger shoes and a hair advantage! Therefore Louis Mountbatten’s ludicrous 5ft11 listing on google is even more off since he’s a good 2in taller than Philip in old photos. Both deserve a page I think

Edmund himself claimed to be 6'2" so I'm not buying your story.

Bob Atwatee said on 17/May/18
I knew Sir Edmund as a member of the Explorers Club. I am around 6'5" and he seemed about my same height. He is certainly at least 6'4"
Rampage(-_-_-)Clover said on 23/Apr/18
You could make an argument for a bit over 6ft2 and he didn't bother with fractions. Certainly not it anyway
APersonWhoIsTall said on 26/Mar/18
Google says he's six foot six

Editor Rob
I think 6ft 6 is possible if somebody like Philip Mountbatten was 6ft 4 range, although I think the fact Edmund wrote he was 6ft 2 trumps any search engine spreading fake news about 6ft 6 😎

Ian C. said on 21/Feb/18
Hillary was listed in the Aukland phone book, preferred to be called Ed, and was annoyed that Queen Elizabeth had knighted him without his permission while he still on Everest. A genuinely humble man.

Surprisingly thin. You would think that a man who could ascend Everest and make it back alive would have been more sturdily built.

Ian C. said on 4/Nov/17
Don't you worry, Rob; I regard you as the best source for accurate celebrity heights.

It is interesting, though, that the exaggerated claims for Hillary's height became received wisdom. I think (perhaps inaccurately) that his obituaries in authoritative newspapers put his height at six foot five. Maybe this came about because Tenzing Norgay was short. Maybe it was because the original stories about Hillary's and Norgay's conquest of Everest were hastily written by people who had never met Hillary, could not interview him in person because he was climbing down a mountain in Nepal, and knew only that he was unusually tall.

Editor Rob: sometimes exaggerated heights appear in books and they get used or picked up by others who write articles.

Ian C. said on 26/Oct/17
Well, this is a surprising one. If you ask Google how tall Hillary was, the answer you get is six foot six. I recall reading articles about Hillary that put him at six foot five. He looks to me like a ringer for Fred Gwynne (Herman Munster), who was six five.

I certainly don't think a distinguished adventurer like Edmund would be happy with False Trivia from Google like being 4 inches taller than he claimed to be!

Editor Rob: I'm not sure, but his claim was 6ft 2 so I think around that range.
even said on 5/Jul/17
six foot two
Sandy Cowell said on 24/Jun/17
With regard to Arch's mentioning that the famous mountaineer Edmund Hillary was sometimes described as 6ft5, doesn't it go to prove how much height swindling is going on out there for him to have been widely believed?
The man himself admits to 6ft2, so that's what I shall put for him. It must have had its advantages to have shot up - and so quickly - 9 inches at 14 and 15, when he decided to climb Mount Everest!
Rampage(-_-_-)Clover said on 2/Dec/16
6ft5 is extreme but possibly near 6ft3?
Borats Chicken said on 3/Sep/16
Click Here

Rob, In this picture Tenzing Norgay could look like 5'8.5 more then 5'8 alittle bit.

I know right, For a second I thought it was him at first glance.


He could have rounded down

Editor Rob: he had a good head size that could add to making him appear very tall I believe, I think from looking at general photos, 6ft 2 looked reasonable.

Arch Stanton said on 18/Aug/16
Seriously?? I always read 6 ft 5 for this and assumed it was legit!! Rob you might want to note that he's often described as 6 ft 5.

Editor Rob: I think someone came up with that figure and other people must have used it.
Since Edmund himself claimed 6ft 2, I think that is enough for me.
Borats Chicken said on 18/Aug/16
Rob, how tall would Tenzing Norgay be?