German-born actress, best remembered for films such as Cloak and Dagger, The Four Poster, Mädchen in Uniform, The Pleasure of His Company and The Boys from Brazil. A 1950's article described her as "five feet three-and-a-half inches", while another publication mentioned the "Five-foot-four-inch-tall actress weighs 105 pounds". Lilli herself was asked in a 1946 LA Times how tall she was, laughed "I am 5 feet 3 inches small". 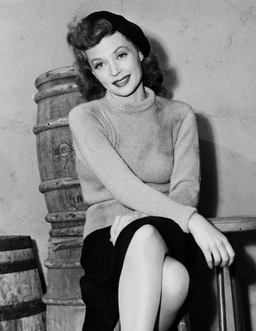 Average Guess (3 Votes)
5ft 3.58in (161.5cm)
Sandy Cowell said on 24/Jun/17
@ Greg - Silly me! Thanks for the snippet of information!👍
Shame to hear though.
Greg said on 18/Jun/17
SANDY COWELL: "she must be getting on now"
Sandy, fyi she died more than 30 years ago.
Sandy Cowell said on 14/Jun/17
So this lady was in 'The Boys From Brazil'! What a great film that was, and I have a copy just waiting to be watched, so when I do, I can check out Lilli Palmer's height, not to mention the other little details that make each person an individual.
Until then, I will vote for Lilli to be 5ft3.5 as stated by one of the two articles mentioned above, the other placing her at 5ft4.
The reasons I have gone for the lower height are because a) as she was around in the 50's, and fully grown, she must be getting on now (sorry Lilli - it happens to us all!), and b) there is only the one box, so we don't have the opportunity to do a 'peak' and a 'now'.
I have learned something about her today as well; I never knew Lilli was German, but I have heard of her, so I felt I was entitled to vote for her! Ha ha ha!