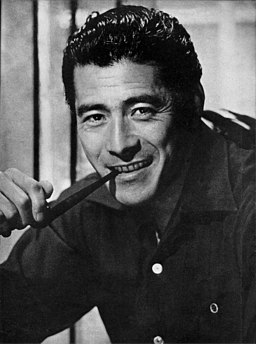 Editor Rob: 5ft 7 might be a bit high.
Sam said on 14/Jun/17
Been a while, just following up to see if you've taken a look at Tatsuya Nakadai, Rob.

Editor Rob: not yet looked at him.
Sam said on 25/May/16
Just following up on Tatsuya Nakadai and whether you've seen enough to consider him for a page, Rob.

Editor Rob: at the moment I don't have time to look at him.
Sam said on 4/Apr/16
I've seen a pretty good chunk of Tatsuya Nakadai's filmography by now and would say 179 cm is what he should be listed at. Rob, if you could check out any of their films together when you have time, Mifune looks about 5 cm shorter than Nakadai. Pretty much every film they're in together, fron the first, Yojimbo to the last I've seen, Samurai Rebellion, are masterworks, easily among the best samurai films ever, plus one great contemporary thriller, High and Low.
Sam said on 3/Dec/15
Not a super comparison but here is Nakadai fighting Bud Spencer in his token spaghetti western. I think he could pass for 5'11" range there, difference looks less than 4 inches IMO there around 0:47.
Click Here
On evidence, I think 5'10.5"-5'11" is what Nakadai looked at peak, any listing around that sounds good to me.

Sam said on 1/Dec/15
Rob, this book claims Nakadai was six feet tall.
Click Here
I doubt it though, he doesn't look much more than 2 inches taller than Mifune, maybe Tatsuya could have brushed 5'11" with his best posture though. Really would appreciate his addition!

Editor Rob: I've not really seen enough, it can be hard to judge, but 5ft 11 might be the most I'd have thought

Editor Rob: at the moment not had time to look properly.
Sam said on 20/Nov/15
BTW just saw Mifune opposite Shintaro Katsu in Zatoichi Meets Yojimbo, a film I haven't seen in years. Was curious how he'd stack up since I've been binging the Zatoichi series and not a lot of great comparisons, I think Mifune could appear about an inch taller even though Katsu's sandals seemed a little bigger than Mifune's black sandals. Mifune looks big and commanding in crowd scenes more so than Katsu who often is bowing, slouching and stumbling just up to the point where he starts slashing everybody.
In the next film, Zatoichi Goes to the Fire Festival, Tatsuya Nakadai plays his antagonist and does appear somewhere in the range of 3 to 4 inches taller than Katsu. Also Nakadai looks a towering guy walking in the streets in that film, I'd reckon he looks the equivalent of 6'3" American today.
Sam said on 16/Nov/15
What do you think on Nakadai, Rob?
Sam said on 12/Nov/15
Rob, I'd like to plead for a page for Tatsuya Nakadai, Mifune's frequent on-screen rival. Mifune is one of my favorite all-time actors, but Nakadai is way more versatile and I dare say had the more distinguished non-Kurosawa career. He was one of the best leading actors I've ever seen in The Human Condition, Harakiri, Sword of Doom, Kill!, Kagemusha and Ran...the characters are so diverse! A few bios note he was tall. I see listing online (none reliable) in the range of 178 to 180 cm.
Here's some with Nakadai next to Mifune:
Click Here
Click Here
Click Here
Click Here
Click Here
I actually think 179 cm is a pretty excellent fit for Nakadai, it would make him exactly 2 inches over Mifune. What do you see him at, Rob? Would you please add him?


Sam said on 2/Jun/15
Arch, bear in mind I think a Japanese man from his generation would probably have averaged close to 5'5", so he would seem relatively tall as a strong six foot guy would walking around in UK or US today...if I am right for the average for that generation, Kurosawa would have stood out like a 6'5"+ guy in the same crowd!
Arch Stanton said on 26/May/15
Rob can you add a photo? I was expecting him to be missing, so glad you have him. Oddly could seem tallish in films and imposing.
Sam said on 28/Apr/15
Rob, can you him to this "Chinese-born Japanese actor best remembered for his roles in Rashomon, Seven Samurai, Throne of Blood, The Hidden Fortress, Yojimbo, High and Low, Red Beard, Samurai Rebellion, TV's Shogun and the Samurai triology".
While it's true he was by far Kurosawa's most regular leading man, he was in about half of Kurosawa's films.
Sam said on 11/Oct/14
He might be one of my top 5 favorite actors of all time. His relationship w/ Kurosawa was like Wayne's with Ford, but Mifune was a more versatile actor than Duke and had an electric, boisterous energy you rarely see in actors, except maybe James Cagney, if the role called for it. No matter that he was an average sized guy, Mifune's a giant of the screen.
MAH said on 4/Aug/14
I was lucky enough to be within a few feet of Mifune-sensei while he made a personal appearance at the Directors Guild. He appeared to be 5' 8", or so. This was in the 80s.
Sam said on 19/Jun/13
The great Mr. Mifune was pretty close in height to Charles Bronson. In the movie they did together, Red Sun, Bronson can look a tad taller but is wearing cowboy boots against Mifune's sandals. In these stills, you can see they're pretty similar heightwise:
Click Here
In comparison to another well-known Western actor, he looked about 5 inches shorter than Lee Marvin in Hell in the Pacific.
Click Here
You can also compare to Steven Spielberg here. While Mifune was in his 60s, he may have a slight edge over Spielberg, although posture and camera proximity might comparing them tough:
Click Here
From same movie, not a good height shot, but cool to see him next to Christopher Lee. Strong 5'8" works for Mifune in conclusion.
Click Here


JD89 said on 8/Oct/11
Tatsuya Nakadai is listed 178cm 75kg ,i'm fluent in japanese because i studied there so trust me when i checked his profiles in japanese he's always listed 178cm.about Mifune height is not listed but in a japanese site where they discuss about their actors heights a guy said he was described between 170-176cm.
Sam said on 30/Jun/11
Tatsuya Nakadai was 5'11" and Mifune probably was about the listed height, although about 5'8.5" of badass
sam said on 12/Mar/08
Yes, Takashi Shimura was about 5'7" I think. You can see he was about 1.5-2 inches shorter than Mifune, about the same margin by which Tatsuya Nakadai was taller than Mifune.
the shredder said on 5/Mar/08
Rob , any clue on Takashi Shimura ? ... 5'7 ?
the shredder said on 3/Mar/08
Rob , how tall was Takashi Shimura ? ... He was in Seven Samurai ! ... Ive read 5'7 for him ! ... I also read as low as 5'6 for Toshiro Mifune !

[Editor Rob: you might have asked a question or to look at a clip, so sometimes I may or may not have time at that moment, so would leave it and come back.]
AshnarLynx said on 26/Sep/07
In that movie "Yojimbo" he looks at least three inches shorter than Tatsuya Nakadai, who is reported to have been 6 feet. Then again in "Seven Samurai" he is among the tallest samurai, only Minoru Chiaki was taller.
Editor Rob said on 24/Sep/06
In 1984 Sacramento Bee mentioned "Rising to his full height (5 feet, 9 inches)"
Bleemo said on 5/May/06
Actually what ColinG says here is very true, even more so then I had imagined. The average height of a Japense youngster these days is said to be 170cm ish or about 5'7.

And apparently Japanese youths are 8cm taller then Japanese men in the 1950's, here is my source for that, it's a bit long winded but it's about half way downand the sentence starts, "Even the Japanese":

So by modern western standards at an average of about 176cm or 5'9.25 he would stand about 6'2.5, hence he was always one of the tallest in his films, because he was very tall by Japan's standards. This is Proffessor Bleemo signing off....

P.S. Ever considered doing an article about the average heights of various countries Rob? I mean a lot of people on here argue about the average heights, would be nice to clarify it.
ColinG said on 25/Jan/06
Did anyone ever see the film "Hell in the Pacific"? I remember being shocked at how small Mifune looked after his imposing appearance in "Seven Samurai". Of course, Lee Marvin was a big man, but he was no giant.
I know what you mean, Bleemo, when you say he seemed "average height", but you're thinking of average height for your own race. For a Japanese, he was obviously above average.
Bleemo said on 5/Nov/05
Aye I was amazed to hear he was average height in Seven Samurai and the Hidden Fortress he looks lanky and well built, just shows you how the height of your co-stars can affect how you are perceived.
Issheuhboy said on 31/Aug/05
Apparently, Hollywood invited him over from Japan after the success of the Kurusawa films, and were suprised that he was medium height, instead of massively tall as he seemed compared to his Japanese co-stars. 5'8 I'd say.
Celebrity Heights A-Z
A
B
C
D
E
F
G
H
I
J
K
L
M
N
O
P
Q
R
S
T
U
V
W
X
Y
Z
Random Celebrity
Latest Star Heights