Yousef Erakat (aka FouseyTUBE) is an American Youtube Star, who has amassed over 8 million subscribers and topped 1 billion views. He has claimed to stand "5'11" tall. 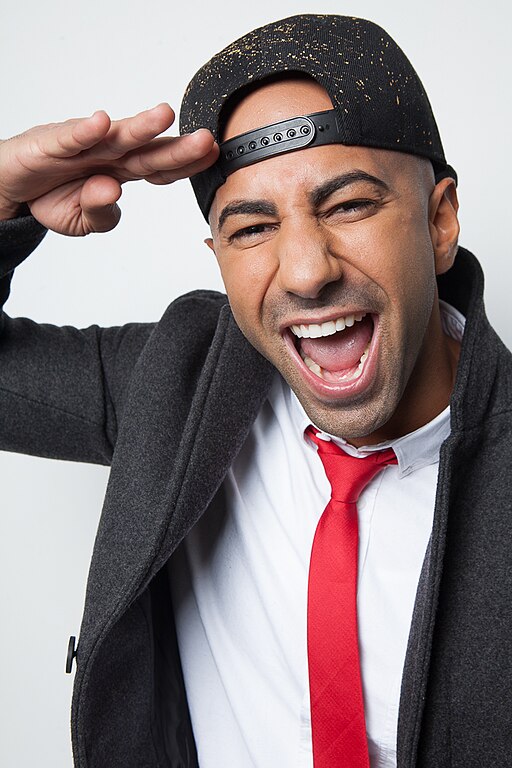 rob, what do you think

barry said on 26/Jun/21
@2pacalypse nah bryce hall is 5ft 8 max and austin is 5ft 8 1/2 max
2pacalypse wow said on 22/Jun/21
@FoolishKillah, Bryce is 5'9" maybe.. but no more than that.
FoolishKillah said on 12/Jun/21
Rob, this is ridiculous, these two well known youtubers; Bryce hall, and Austin Mcbroom are now claiming 5'11 and 6 ft tall. They should get their own page here, Rob. They're such frauds. They ranges around 5'7 to 5'8 next to 5'9 Fouseytube. Go watch this video here: Click Here
FoolishKillah said on 23/May/21
Rob, How tall do you think Austin Mcbroom and Bryce hall against 5'9 Fouseytube? Austin claims 6 ft and Bryce hall claims 5'9 both wearing normal shoes.The picture was taken from their previous press conference. You can watch it on youtube Rob, the press conference got trending because of the altercation. Here's the sample pic: Click Here

Editor Rob
those guys looked more 5ft 8-8.5 than 9+
Joseph177 said on 23/May/20
Here is a pic. I don't know man. They might even be the same height. Like I said Alex Wassabi have a lot of hair and Yousef is bald so that's probably why Alex looked taller. Alex can be anywhere from 177-179 cm. There is another pic showing them standing together with boxing footwear and they look very similar.

Joseph177 said on 17/May/20
Yousef's buddy Alex Wassabi seems to be 179 cm. Not sure if it's because of his hair and Yousef is bald, but he does look taller than Yousef. It will be great if Rob gives him a page. He is a very famous youtuber as well.
Nicholas 5'9.25 said on 17/Apr/20
Hey Rob, there's this youtuber named Aled Wassabi, and google says he's 6 feet tall, and says Roi guava is between 5'5" and 5'7". Looking at these pictures, how tall would you say they are? Click Here Click Here

Editor Rob
He might be taller than Yousef, but I have only seen a little of Alex.
He did in fact once claim 5ft 12, so he does seem to go with 6ft as his claim!
MD said on 15/Mar/20
@Rob,

Editor Rob
Yeah he can look not much over 5ft 9.

Robert Bartleheim said on 25/Jun/18
Rob, you should check out his comparison with Rice Gum: Click Here

Does fousey deserve an upgrade?

Editor Rob
There might be near 3 inches between them, but whether Rice is 6ft 0.5 is still up for debate.

His chest has nothing to do with it, unless you're talking about broad shoulders which can sometimes give the impression of being tall from a distance.

Mark said on 12/Sep/17
He has a massive chest that makes him look bigger and wears those Nike shoes that add inch and a half height...typical 5'8 guy who seems about 5'10 with the big chest and those Nike shoes.
Peter181cm said on 8/Sep/17
Typical 5'9 guy trying to claim 5'11 or 6' -_-
Max said on 23/Aug/17
Rob can romanatwood get a page he seems 5ft8 range
Meme Dude said on 17/Aug/17
Lol I thought I remember Fousey saying he was 6 foot in a vid. I thought this site would only have pop stars but I guess YouTube stars are know that too but I still want Ethan Klein on here, I know he's gotta be real with his height.
6ftMamooth said on 27/Jul/17
He looked near 6ft with steph curry assuming curry is a legit 6'3
PewDiePie fan said on 3/Jul/17
Rob can you please do romanatwood I am really curious to know how tall he is
Cameron said on 21/Jun/17
@ Chris Yousef is closer to the camera. Not a great picture for judging height IMO.
Chris said on 31/May/17
5'11 claimer Jesse Wellens with Yousef. Similar footwear, indoors. Click Here
Rob, what would you say is? Next to Casey Neistat, seems anywhere from 5'9-5'9.5 max.
Looks at least a cm under Yosef here, though.

he stands next to that 5'9 youtuber on a hoverboard that adds probably like 5 inches...

Click Here here he stands next to 5'9 danny duncun..

Jani said on 11/May/17
This one seems to be fairly accurate. Fousey is very slightly shorter than Vitaly who is about 178-179cm. Fousey is also a tiny bit taller than Pewdiepie (who is 175cm on this site). Sometimes Fousey's footwear is little questionable though (sometimes it looks like he has some heel lifts in his sneakers) so he might be 174cm-175cm.
TJE said on 19/Apr/17
Click Here

Another one with barely 5'8 Roman Atwood. He's got 1.5 inches tops on him and that's before accounting the footwear.

Editor Rob
Nick, he could be a good 3 inches taller than Fousey.
TJE said on 16/Nov/16
Looks at least 7 inches shorter than Tyler Perry.
Aaron Zamora said on 1/Nov/16
@nina- If you watch Alex's blogs he claimed to wear lifts in a vlog including Brock o burn! I believe he's around fouseys height.
Nina said on 30/Oct/16
Can you please do a page for his youtuber best friends Alex wassabi and LaurDIY?

Aaron Zamora said on 19/Oct/16
Rob, what do you think about these pictures? Here's fouseytube next to 6.0 1/2 Steve Harvey Click Here. I believehe looks close to his claim or Steve needs a downgrade. Here is fousey next to 6'4.5 listed Tyler perry Click Here. He looks kind of short next to him. I believe Steve is 6'0 at most.

Editor Rob
he looks a couple of inches smaller...whether they are both standing similar I don't know, but it certainly appears Steve might lose a bit more, suddenly you have 2.5 inches.

That hat of his gives 3cm before you hit his head.

Editor Rob
I think he can look as low as 5ft 9.5, but also at times near 5ft 10, he may be claiming a height in sneakers or just adding an inch.

MD said on 2/Sep/16
Why is he still listed as being nearly 5'10"?
Aaron Zamora said on 31/Aug/16
Fouseytube next to Kevin hart! How tall does he look Rob? Fouseytube isn't standing at his best. Click Here

Editor Rob
can look 5ft 9 range there.
TJE said on 29/Aug/16
What? Yousef was standing closer to the camera. Previous listing is his max.
Aaron Zamora said on 28/Aug/16
Rob, if you jump to minute 6:21 he comes out with Will.I.AM it took me a while to find this video and if you jump the video to minute 8:06 he comes out next to 6'0 listed Common how tall do you believe he really is? Next to common the video is recorded with them side by side in a good angle. Click Here

Editor Rob
he can look quite close to 5ft 10 with Common there, who typically looks near his claim.
Jon said on 19/Aug/16
Click Here

either he's taller , or he wears shoes that give him height or all the people in the internet lie about their heights

Editor Rob
I think the 5ft 9.5 figure is a believable mark for him, I am having one more look at him...
Jamie said on 17/Jun/16
I think 5' 9" range is a better shout. He's shorter than 5' 10" range Vitaly.
Kourosh said on 16/Jun/16
Is this goof even a celebrity to be added on?? it seems he is just a youber punk you have not added many footballers , actors , athletics who are worthy owning a page , instead you giving this goof internet junkie a page? come on rob think about credibility of your website.

Editor Rob
I would prefer if we don't insult people. People do search for this guy's height on the web. Internet famous celebrities should be considered I feel.
Alxr37 said on 8/Jun/16
My guess is 5'9.5 doesn't look much taller than Roman
Johno said on 7/Jun/16
He has his own page? Cool.
Mat said on 7/Jun/16
rob did you really think he was worth adding? i mean there are a lot more famous youtubers than him

Editor Rob
it depends on whether people are interested in a person's height or not.

I think there is interest in many youtubers heights, it's just a matter of which should have a page on their own.

MD said on 7/Jun/16
5'10" is too tall, maybe just by a little, but it's too high a listing.
Aaron Zamora said on 6/Jun/16
Rob, do you think you can ever get a picture with Fouseytube? He does meet and greets every once in a while. That would for sure set everything out.

Editor Rob
unfortunately probably unlikely.
Aaron Zamora said on 5/Jun/16
Fouseytube is coming out in Boo a Madeas Halloween so hopefully in that movie we can have a good comparison of him next to Tyler perry and Bella Thorne.
Mike said on 4/Jun/16
I always thought he was around 6ft lol
Alxr37 said on 4/Jun/16
I'm the video wear he's giving away shoes to people he looks kinda short
Gaza2121 said on 4/Jun/16
Click Here

princessdiana said on 4/Jun/16
His friend/neighbor alex wassabi claims he's 5'11.75 but looks about 5'10ish edges out fousey by an inch or maybe a little more barefoot. I'm telling you all fousey is a weird case.
jajamen said on 3/Jun/16
Rob, is 5'9.5 more possible?

He can look MAYBE 5-6 cm taller than Roman Atwood and that's with a 1-2 cm footwear advantage; though he genuinely looks nearer 177 with Floyd Mayweather.

Editor Rob
he could look around that, but I don't know if he really is as low as that mark, so I started him at 5ft 10.
c-mo said on 3/Jun/16
I thought he must be 5'11 when I watched his videos before I read that he claims it . he looks like a 5'11 guy . I dont understand why you put him at 5'10 rob even though you havent met him :D maybe because if he was 5'11 he most likely would claim 6'0 ? that is something we should take into account because it is very possible that if he was 5'11 he would just say 6'0

MD said on 3/Jun/16
With however tall Roman Atwood is (I see the Youtube page says "barely 5'8" whatever that means):

Editor Rob
there are a couple of female youtubers I believe...but then, maybe eventually the top 100 or so should have a page of their own.