Canadian-American actress best remembered for roles in films such as Gone with the Wind, Pride and Prejudice, Waterfront Lady, Whistling in Brooklyn, Love Finds Andy Hardy, The Secret Life of Walter Mitty and Orchestra Wives. In a 1939 book her height was given as 5ft 3.5 inches and her weight was 105 pounds, although she herself said "No! I was taller than Mickey. I was about 5'4", and continued to grow until I was 28. I'm about 5'6" still, and I haven't begun to shrink as Mickey has. When we were filming together I had to slouch! If we were walking down the street together they had to dig a trench for me to walk in!". 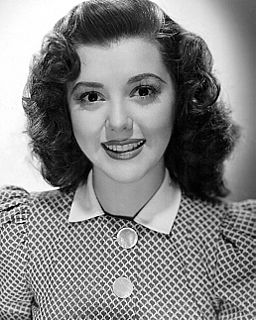 
littlesue said on 11/Jan/15
Around this height, one of the few celebs who looked like she aged naturally!!
Arch Stanton said on 11/Jan/15
I think the 5'3.5 is a legit one, perhaps Mickey Rooney was 5'2" then as they were both barefoot in that pool scene I believe.
Arch Stanton said on 11/Jan/15
Thanks, can you squeeze in Whistling in Brooklyn too, a memorable one with Red Skelton? Yeah I was leaning on this too but I thought a 2.5 inch diff from the listing might be a bit extreme. The height diff between her and Rooney was about 1.5 inches wasn't it, 2 inches was the most I could see and I've always thought 5'2 at times for Rooney can look a bit generous!
Celebrity Heights A-Z
A
B
C
D
E
F
G
H
I
J
K
L
M
N
O
P
Q
R
S
T
U
V
W
X
Y
Z
Random Celebrity
Latest Star Heights