By the time I first met him in the Twenties he was already much in demand as a successful character actor. He lacked inches and wore lifts in his shoes to increase his height. - John Gielgud 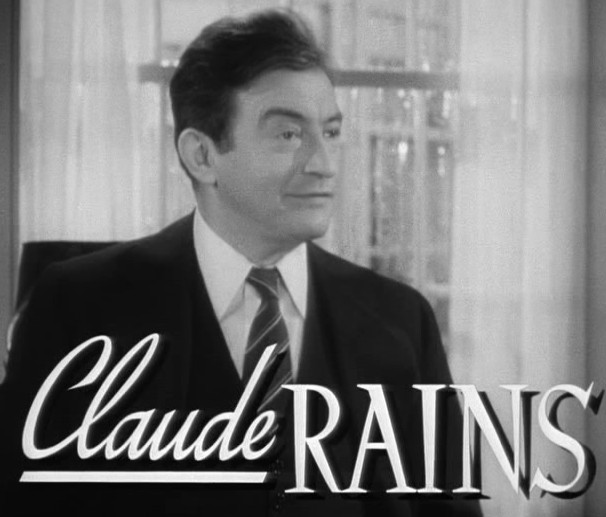 Five feet six. My type is what women call Duck stature, when the backside is too near the ground. - The LA Times, 1946

Unbelievably Claude was once being publicised as standing a towering 5ft 10.5 inches tall with a weight of 165 pounds.

He was self-conscious about his height, wore elevator shoes, and developed a way of brushing his hair to add an inch or so to his stature. - An Actor's Voice

Average Guess (17 Votes)
5ft 6in (167.6cm)
Robert Romero said on 12/Aug/18
I don't buy the 5'6 height at all. Last night I watched The Wolf Man. Lon Chaney TOWERED over him. The difference looked to be about a foot. There was a big difference even between him and the 5'8 Evelyn Ankers. Chaney was 6'2, so I'd put Rains at no more than 5'3.
James said on 28/Feb/17
He was no more than 5'5".
Shredder said on 18/Dec/16
Honestly he looks closer to 5'5 than 5'6.
Rampage(-_-_-)Clover said on 8/Jul/16
He reminds me a bit of Bryan Cranston
Sam said on 17/Jun/15
Could you add Lawrence of Arabia to his credits to make them an even 10 credits, Rob? Few actors could have claimed to have been in so many classics.
Sam said on 29/May/15
He claimed and was quoted at an honest 5'6" even if height-conscious, 5'10.5" could have been from a publicist who need glasses very bad!
Arch Stanton said on 11/Apr/15
5'10.5???? And people thought G was bad claiming 5 ft 8!
Arch Stanton said on 11/Apr/15
5'5.5 is quite possible.
Gonzalo said on 10/Apr/15
Great actor. James Stewart dwarfed him in Mr Smith goes to Washington. 1`68 at the most, in fact I wouldn´t be surprised if he was actually shorter than that
Arch Stanton said on 25/Feb/14
Rob can you add best remembered for films like Casablanca, Mr. Smith Goes to Washington, The Invisible Man, The Wolf Man, Now Voyager, Mr. Skeffington (Oscar nom), Caesar and Cleopatra and Notorious.
Arch Stanton said on 25/Feb/14
Agreed. He graced the screen like a breeze on summer's afternoon! Looks 5'5" range in The Wolf Man.
Sam said on 27/Jan/14
Irregardless of his stature, he was an excellent actor with a cool screen presence and awesome voice. He was an expert at inspiring both spite and sympathy for his characters.
Arch Stanton said on 26/Jan/14
Actually does look a convincing 5'6" in Now, Voyager.
Arch Stanton said on 18/Nov/13
You may very well be right Know it all, check out the wedge sandals!
Knowitall said on 14/Nov/13
Rains was about five five, no more, no less.
Arch Stanton said on 13/Nov/13
Looking at that scene again, good grief Stewart Granger is super camp in that role isn't he!!
Arch Stanton said on 13/Nov/13
Noted, thanks. Its a pity that you don't have a sort of wi -ki -like system on here and approve of a group of editors here who can post here and their comments appear immediately. I often display my thoughts while watching a film here on a different tab so unfortunately that means I don't always condense my posts into one or two sections. I'd rather be able to edit my post and condense into one for convenience but it doesn't always happen like that, sorry! I'm sure you often appreciate my findings though as I think it helps the site.. If you haven't checked out that Rains and Granger scene in which his box is obviously concealed behind the wall it should amuse you in way they made a man who is even a questionable 5 ft 6 look 6 ft 4!!
Arch Stanton said on 12/Nov/13
Rob for some reason my url link didn't come through here, it makes my posts look like gibberish otherwise!

Editor Rob
there was another comment I hadn't clicked show yet, but the links looked ok. Some links can have characters in them they really shouldn't, stuff like symbols, if you see links with those in them always best to use the url shortenening sites
Arch Stanton said on 11/Nov/13
Haha check out 1hr 13 range on the link. He's 6 ft 4, taller than 6'3" Stewart Granger!! Hehe the guy in blue is several inches taller than a wedge wearing Rains and Granger towers that guy. Notice the warped camera angle of the scene with Rains and Granger, his obvious standing on a box and Granger's dropped posture with leg forward to reduce the massive height difference! That's a perfect example of Hollywood height trickery right there at 1:13!!
Arch Stanton said on 11/Nov/13
Rob this is certainly questionable. See 51:50 Click Here You can see his wedge sandals about 3 inches and he only looks between 2 and 3 inches taller than Vivien Leigh and I doubt she has footwear advantage!! I'm guessing he was probably even shorter than this.
Arch Stanton said on 11/Nov/13
Yeah he's wearing 2-3 inch wedge sandals in Cleopatra and still looks a lot shorter than a lot of the other guys in the film. Vivien Leigh must have on similar footwear as he's only about 3 inches taller than her even in the wedges!
Arch Stanton said on 11/Nov/13
They do they're very best to make him look much taller than Vivien Leigh but in scenes where they walk you can see he's no more than 5'6". Although his sandals do look suspiciously thick, must be of the NYC kind!
Arch Stanton said on 11/Nov/13
He seems taller in Caesar and Cleopatra IMO, but yeah he seemed around 5'6" in Notorious.
Sam said on 7/Aug/13
This guy had to stand on a box next to Ingrid Bergman in Notorious.
Click Here
He didn't in Casablanca, where a lift-wearing Humphrey Bogart can look 4-5 inches taller than him!
Click Here

guyfrommars said on 18/Oct/11
Rains had an interesting set of footwear in Caesar and Cleopatra: Click Here
Mr. Kaplan said on 8/Oct/11
John Garfield had two inches on him.
guyfrommars said on 11/Apr/11
Hitchcock had a hard time trying to make him taller in Notorious, next to Ingrid. They've built special elevated platforms for him on the set. In most of his films, Rains wore a huge amount of lifts and elevator shoes.
Mr. Kaplan said on 7/Dec/10
He stood on a box in "Notorious" to be eye-to-eye with 5'8" Ingrid Bergman!
Celebrity Heights A-Z
A
B
C
D
E
F
G
H
I
J
K
L
M
N
O
P
Q
R
S
T
U
V
W
X
Y
Z
Random Celebrity
Latest Star Heights