Cameroon-born French professional MMA fighter, who participates in the Heavyweight division of the UFC. 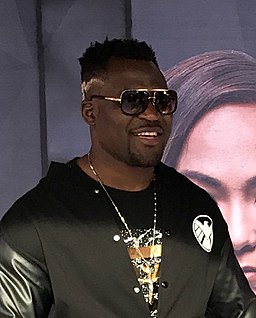 There are VERY VERY few 6'4+ers on UFC


Canson said on 27/Mar/21
I’m not so sure Francis is a solid 6’4” afternoon height with Kobe. Maybe 6’3.75” instead but no less. Then again he may surprise us
Duhon said on 26/Mar/21
I think Ngannou is the textbook definition of a 6'4" guy. Looks taller than every other "6'4" listed UFC fighter.
Jordan87 said on 25/Mar/21
Kobe had him by an Inch. Kobe claims he himself was 6'5 in sneakers so I'm not sure what that means considering many believe Kobe was 6'5" barefoot.

Kobe was the taller man of these two for sure though.

There is an argument for him being 6ft4 1/2, but he is definately not shorter than 6ft4

Max holloway is no more than 5’10 178cm, he just constantly wears thick sneakers/shoes around people who are in very thin shoes or are barefoot. He’s barely taller than 5’8.5 McGregor

eeeer said on 3/Nov/19
Ngannou's real height is most likely 6'3 1/2. I'm serious. The Shaq and Gane comparisons makes it obvious.

in a recent interview Ngannou said : " Jon Jones would be my ideal opponent because I met him once and he was really tall, same as me... Well, almost as me...I just may have few pounds on him"


Christian 6'5 3/8" said on 25/Feb/19
@Miiiiiiighty
He's still shorter than 195cm either way, whether you wanna call that an "exaggeration" or not doesn't change that fact.
Miiiiiiighty_- said on 25/Feb/19
@maa Hunt @176 makes no sense, especially if you have JDS @190cm.
Please look at their staredown. Werdum @ 189cm makes no sense either, especially since you have Overeem at 191 and Fabricio appeared 1 to 2cm taller both time they fought.

@Christian 6'5 3/8" just reporting what the man himself said, as far as "exaggeration" is concerned, well saying that he looks way shorter than 195cm certainly is what should be called exaggerating.
Jordan87 said on 19/Feb/19
ALI183, he was more than 2" On Cain. What is wrong with you?

195cm is a exaggeration. He looks way shorter than that with a real 195cm like Kobe Bryant.

Miiiiiiighty_- said on 12/Jul/18
@ConorFan.
in all fairness Hunt often looked like someone who would give his height as 5'10 but that's probably without even standing straight and at his lowest of the day..
He looked closer to 5'11 on tons of occasions..

As far as Francis is concerned, he himself said " 1.95m " in a french interview so..
ConorFan. said on 1/Jun/18
Francis here with Mark Hunt, Tyson Pedro and Tai TuiVasa. (Pic link: Click Here ) Rob keep in mind Tyson is listed as 6'3 do you still think Francis is 6'4 or possibly 6'5?

Editor Rob
You could argue a bit over 6ft 4 there
ee said on 12/May/18
@Iknowheight meet halfway? This isn't a philosophy class where ideas are malleable. All his pictures make him look gigantic, even as big as 6'5 with some angles and you say he's 6'3? This man is clearly above 6'4. Why believe him to be shorter than he is? You don't benefit from him being even 6'0 so might as well just accept this guy at his real height which IMO would be 6'4 1/2 or quite possibly more judging from the lebron and Stipe pictures.
Iknowheight said on 19/Mar/18
Okay let's meet halfway and call him a solid 6'3 1/2. Not a centimeter over though!
ConorFan said on 15/Mar/18
@Iknowheight i found your username funny because you clearly don't know how angle's work in pictures, that pic you posted is clearly at an angle that makes them both look fairly even but you can still tell Francis is taller than Alister.
Iknowheight said on 7/Mar/18
Frnacis Ngannou is definitely not 6'5. Not even 6'4 like people think he is.
I think you should really update this Rob,
I have a picture here of Alistair overeem and Ngannou side by side. They are the same height. Click Here
Ngannou is 6'3 even. Maybe 6'3 1/4 on his best day.

Stipe is not fully 6'4. Francis is 6'4 therefore Stipe cannot be. If you believe Francis is 6'5 like the UFC lists him then not sure what to say to you.
kevin seung said on 5/Feb/18
i guess he is 2cm taller than ovream
ConorFan said on 3/Feb/18
I snapped a shot of Stipe & Francis standing barefoot in the octagon face off ( Pic Link: Click Here ) imo Francis is a clear inch taller than Stipe which would make him 6'5.
Levi said on 28/Jan/18
Rob, how about a page for the current heavyweight champ Stipe Miocic? Listed as 6'4" but has looked taller than most 6'4" listed fighters.
Animus said on 23/Jan/18
He definitely did not look shorter than Stipe during the fight. He makes Stipe look shorter than 6ft4, if this listing is accurate.
Josh Jeffords said on 23/Jan/18
Looked taller than stipe at stare down but shorter barefoot during fight.
Could be a posture thing but think folks are still holding the tape above the hair..
ConorFan said on 20/Jan/18
Also Rob can we have some more MMA guys, like Tyron Woodley for example, he has claimed to be 5'9 in an interview prior to the Damian Maia fight, but he looks significantly shorter than his "5'9" claim at around 5'6 or 5'7 in my opinion.
ConorFan said on 20/Jan/18
Rob i think he's closer to 6'5, because he looks an inch or so taller than legit 6'4 Stipe. But we'll see in the final staredown in the octagon who is taller i guess.
DruceLee said on 18/Jan/18
Closer to 6'5 definitely.
Christian-6'5 3/8 said on 17/Jan/18
Whether a fraction under 6'4" for Ngannou is arguable, I'm pretty certain that Miocic is below it.
Shubo said on 17/Jan/18
Rob. Is 6'3.5 or 6'3.75 at night possible?

Editor Rob
They seem like they could be very close in height.
Vlad said on 16/Jan/18
I think him and Miocic are the only legit 6'4 listed in the division.
Celebrity Heights A-Z
A
B
C
D
E
F
G
H
I
J
K
L
M
N
O
P
Q
R
S
T
U
V
W
X
Y
Z
Random Celebrity
Latest Star Heights