American actor best remembered for roles in films such as They Shoot Horses, Don't They, Teacher's Pet, Come Fill the Cup, The Girl Who Had Everything, The Desperate Hours, Desk Set, Strange Bedfellows, Bring Me the Head of Alfredo Garcia, That Touch of Mink and Kid Galahad. 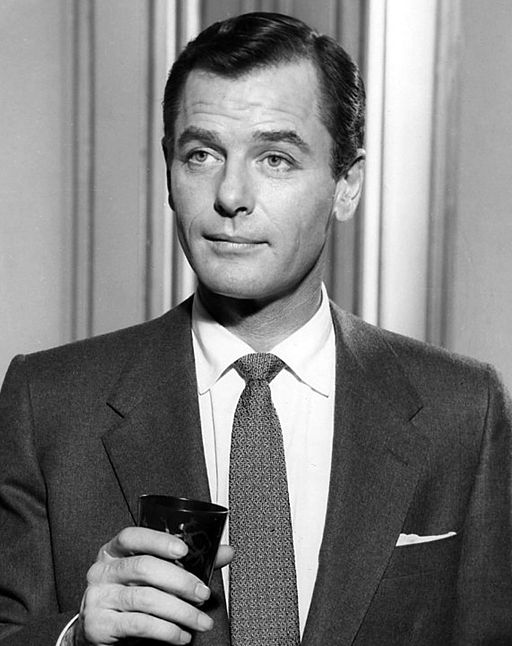 Average Guess (7 Votes)
6ft 1in (185.4cm)
Arch Stanton said on 15/Jun/20
One of my favourite actors, always brings a smile to my face. I never got a seedy vibe from him, Edward G Robinson now, everything about him gave me the vibe he was a pervert!
Arch Stanton said on 12/Apr/17
Rob I think you could include him in the Classic actors category on his 50s films.
Arch Stanton said on 12/Apr/17
This guy was definitely eternally sloshed. Always has this happy, bemused look on his face in every film, a happy drunk. Consistently looked this. He had a fun vibe about him, don't think he took himself that seriously, which is always refreshing in Hollywood. I always enjoy his appearances.
Sam said on 4/May/16
He could be a guy who was a touch under the 6'1" mark.
w/ David Niven (Young may be dropping more height there): Click Here
w/ Gregory Peck: Click Here
w/ Clark Gable: Click Here
w/ Charles Bronson & Elvis Presley: Click Here
w/ Anthony Francoisa: Click Here
looking quite tall with The Duke I must admit:
Click Here


Arch Stanton said on 7/Apr/16
I dont know about seedy, but yes, he certainly looked like he was sloshed all the time and the sort of guy who would drunkenly hit on women liberally!
Sam said on 5/Apr/16
I had read only 6'0" claims for him in the past I think but I did get the impression that he was closer to 6'1". Always got a seedy vibe off of him, maybe because the first film I recalled seeing him in was They Shoot Horses...
Rampage(-_-_-)Clover said on 4/Apr/16
No less than 6ft1 and I wouldn't rule out 186cm. Could look near 6ft2 at times. Makes me wonder if Gable was actually just a 6ft guy all along. Like Arch said, this guy could look 1in taller than him.
Arch Stanton said on 3/Apr/16
@Rob, do watch Teacher's Pet Click Here trust me on this it's a really good one! I think when stood his best Young could look taller than Clark but he slouched a bit, like in the scene where he's taking a hangoever cure. Do see it it's really good, I'm sure you'll agree that in some scenes when stood straight he can look a strong 6'1, but others look a weak 6'1!
Arch Stanton said on 3/Apr/16
He had a solid three inches on Widmark in Tunnel of Love too.
Arch Stanton said on 3/Apr/16
Thanks Rob, can you squeeze in Come Fill the Cup, The Girl Who Had Everything, The Desperate Hours, Desk Set, Strange Bedfellows and Bring Me the Head of Alfredo Garcia? He could look anything in 6'0.5-6'1.5 range at times. He had poor posture though. I think he could look near an inch taller than Gable when stood straight, but similar when not. A flat 6'1 is probably the best shout overall, but he could certainly look 186 at times. Great actor, loved him in Teacher's Pet in particular. Always looked sloshed ;-)
Anon said on 2/Apr/16
He was also in Game of Death, with Bruce Lee.
Celebrity Heights A-Z
A
B
C
D
E
F
G
H
I
J
K
L
M
N
O
P
Q
R
S
T
U
V
W
X
Y
Z
Random Celebrity
Latest Star Heights