American actress best remembered for roles in film such as The Public Enemy, Gold Diggers of 1933, Footlight Parade, Three on a Match, Will Success Spoil Rock Hunter?, Cry Havoc, Night Nurse, The Cincinnati Kid and Nightmare Alley. In a 1938 publication it described her as 5ft 4 and weighing 120lbs. Another article mentioned her even as tall as 5ft 4.5, weight 120 pounds, shoe size 6C and vital statistics of: Bust 35 inches, Waist 26 inches and Hips 37 inches. 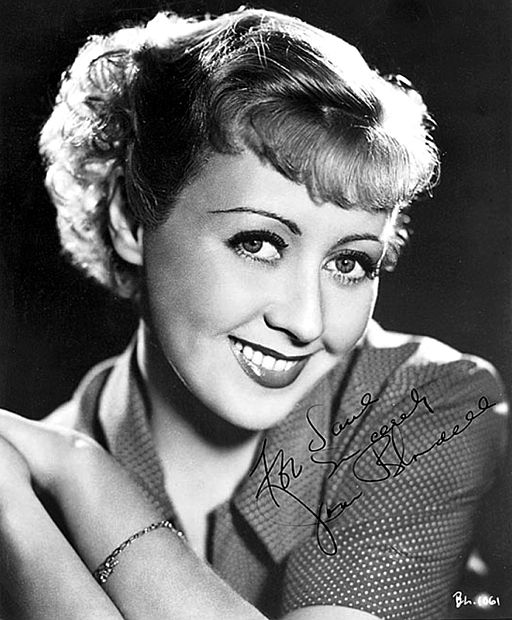 Sandy Cowell said on 27/Nov/16
So many of these classic Hollywood girls are so much smaller than you'd imagine. I saw 5ft2 written down for her and I thought "surely 2 inches taller, at least?"
Then I read above that articles written about her said she was 5ft4 - 5ft4.5! This I do find more credible! Joan Blondell as small as Gillian Anderson? Surely not!
Arch Stanton said on 23/Nov/14
5'2 I think is OK.
littlesue said on 22/Nov/14
I have a full size pic of her in that scene with Cagney, she got mid heel shoes on, I would say she was 5ft 2, looking at pics of her with her ex hubby Mike Todd she looks around the same height as Liz Taylor did with him
Sam said on 21/Nov/14
Her with Spencer Tracy & Kate Hepburn: Click Here
w/ Jane Mansfield: Click Here
w/ Jimmy Cagney: Click Here
w/ Cary Grant: Click Here
w/ Tyrone Power: Click Here
She does look 5'2" range generally but does only look a couple inches under Cagney in what I'd imagine is flats.