Venezuelan professional baseball player, who plays for the Houston Astros. He said once that he weighed 145 pounds and stood about 5 feet 5 inches at age 16. 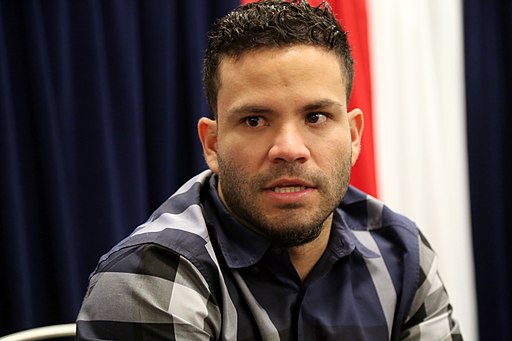 See back to back picture

viper said on 4/Apr/18
If he measured 5-3 it wouldn't surprise me. He can certainly look that at the plate. This listing is way too high.

Truthteller123 said on 4/Mar/18
Pedroia is not 5'9''- he's more like 5'6''-5'7''. If you see in this video: Click Here, you'll see that Pedroia helps out Mookie Betts (5'9'') at 0:21 and seems noticeably smaller in stature than him. Pedroia's a beast but its undoubtable that he's a tad short probs an inch or two above Altuve- his preference of a saggy, oversized Red Sox uniform doesn't help him and makes him look even smaller on the field.
Daredevil said on 14/Dec/17
5ft 6 in cleats
Jay said on 4/Dec/17
How tall is Pedroia? He definitely doesn't look 5'9". I don't think he's that much taller than Altuve.
ReallyShortRussianDude said on 21/Nov/17
Click Here

Holds up quite well with Canelo. Rob, how many inches does Canelo have on Jose?

Blake said on 14/Nov/17
How tall is Gaten Matarazzo from stranger things then Rob?

Editor Rob: could be 5ft 3ish
Chappy said on 13/Nov/17
Where'/ Aaron Judge he is 6 foot 7. He had little over a foot on Altuve at games.
MD said on 9/Nov/17
Definitely in agreement here that he's likely a bit shorter than 5'5", especially given that this is what he was originally listed at meaning even that was a "sports height."
Cameron said on 8/Nov/17
Props to him for being a successful short baseball player.
Johnson said on 8/Nov/17
With 6'3 listed Derek Jeter

mande2013 said on 7/Nov/17
Altuve's a solid 5'4 most likely. But yes most baseball players under 6'0 tend to be overlisted. 5'9ers like Lincecum and Ichiro are routinely listed at 5'11. Pedroia's most likely shorter than 5'9, although Jimmy Rollins' 5'7 listing is probably accurate. He doesn't seem shorter than that to me.
Free said on 7/Nov/17
Alex Bregman is 5-8 going by LSU fans who met him in college.

Baseball doesn't measure heights. They are insane with inflating. They can get away with it because height isn't as important in baseball

Justin Verlander is 6-4 max. He was listed as that in college and I've met him.

with 6'5 listed Justin Verlander
Click Here
Peter175 said on 6/Nov/17
If the Baseball measurements are to be believed, which are probably shoe/sneaker or morning measurements, I still can't see him being as tall as 5'5. 5'4" is where he is imo
MD said on 6/Nov/17
Found this photo with his height listed at 5'5" before he "grew" as he became more well known. lol

And just a general picture of him and his team showing his height in comparison to the average range of heights in the MLB:

Editor Rob: yeah you can see another photo of him with Watts, certainly makes 5ft 6 impossible, even 5ft 4.5 is believable.