Welsh actor best remembered for films such as The Lost Weekend, Dial M for Murder, Dead Men Don't Wear Plaid, Reap the Wild Wind, I Wanted Wings, A Life of Her Own, Love Story and The Uninvited. He was regularly described both 6ft 1 and 2 during his career and also "6 feet 1 1/2 inches in his stocking feet" in a 1944 article. 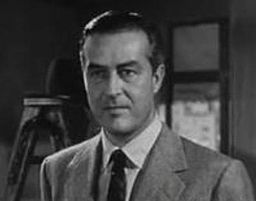 Editor Rob: I'm happy enough with C, A I feel is still a bit high, E a bit low.

Arch Stanton said on 1/Jan/15
No he wasn't Steve. There was a scene in the hallway in which Grant and Mitchum are stood eye to eye for a lengthy period and they looked exactly the same height, 185cm.
Steve said on 30/Dec/14
Mitchum was an inch taller than Cary Grant in The Grass is Greener. Mitchum was a solid 6'1".

I think Mitchum and Milland were the same height in The Last Tycoon.

Arch Stanton said on 30/Dec/14
Click Here Milland if anything looks like he might have pavement advantage there too!
Arch Stanton said on 30/Dec/14
What baffles me on this Rob though is that I thought Mitchum was still standing pretty tall even if a looking a bit jaded in his 70s films and Sam says Milland edged out Mitchum even in 1976. You get a really good look at Milland and O Neal walking together in Love Story and in proportions you can see that he's definitely not even close to 6'1.25 and likely nearer 5 ft 11. And if there was any doubts about the slope where they were walking at the end of the film they're stood on flat ground together it's clear O Neal is a bit taller. Milland certainly clearly looked this in his prime though with Wayne, Tone, McMurray and many others. Did he wears lifts in The Last Tycoon? Something isn't right!
Sam said on 30/Dec/14
Well, Ryan O'Neal certainly looked a solid six foot at peak, I think he and Bruce Dern looked eye-to-eye in The Driver, so he could have been a fraction over the six foot mark as well. Nonetheless, it is surprising that O'Neal could have that much on Milland.
Arch Stanton said on 29/Dec/14
Rob/Sam G image ray milland ryan o neal and you'll see two photos. That's the exact height difference in the film! Baffling isn't it? O Neal can't be over 6 ft because Bruce Dern as Jake I think it was rightly said edged him out.

[Editor Rob: would need to watch it again to see how he looked]

Arch Stanton said on 29/Dec/14
The bizarre thing is that Sam said he had the edge on Mitchum in The Last Tycoon which was 1976!! Now surely Mitchum didn't lose a similar amount by then, I know he still standing tall in Ryan's Daughter and that was 1970 too.
Arch Stanton said on 29/Dec/14
Rob how much do you think he could have reasonably lost by mid 60s? In Love Story (1970) he and Ryan O Neal are walking side by side and O Neal looks a good inch TALLER than Milland!! He looks about 180-81 range in comparison! Could he have lost 2 inches by then? Mmm. Could O Neal have been a bit taller? He looks about 4 inches taller than Ali MacGraw so I think about 6 ft is probably right? Milland?? Baffling. He looks nothing like he did in his prime in stature, although the face still instantly recognizable.

[Editor Rob: some people seem more susceptible to height loss. I think bad habits can contribute towards it. It's not impossible for a mid 60's to have lost 1.5-2 inches, but that's more than average for sure at that age for men.

My advice to anybody in their 40's is to take up a very simple routine. Set aside 10 minutes every other day and do basic types of stretches like touching ceiling/toes etc. Just keep your back muscles active and if you find yourself slouching a lot try to remember not to. But natural degredation in your spine does occur, a good diet can help also help reduce that.]

Sam said on 4/Dec/14
Still had an edge I think in The Last Tycoon next to Robert Mitchum. Weird to seem him with a cue-ball look.
Click Here
Arch Stanton said on 15/Nov/14
Rob can you add Reap the Wild Wind, I Wanted Wings, A Life of Her Own and Love Story. Looks spot on next to Franchot in Star Spangled Rhythm.
Arch Stanton said on 13/Nov/14
The newspaper source mentions that the average height of the actors in Ministry of Fear was 6 ft 2 inches or something!
Arch Stanton said on 13/Nov/14
Rob I found a quote from The Daily Notes of Canonburg, Pennsylvania dated 19 July 1944 Click Here (subscription source). Can you add "A 1944 Pennsylvania newspaper described his height as being "6 feet 1 1/2 inches in his stocking feet". It also mentions Percy Waram being 6 ft 1.
Sam said on 24/Apr/14
Thanks for the link, Arch. Both Milland and Massey look like they could have been a strong 6'1", don't know why Massey has the edge here, maybe he forgot to take off his Lincoln lifts?
Gonzalo said on 24/Apr/14
In The fountainhead Massey looks two inches shorter than Gary Cooper. Click Here
However there are scenes in Reap the wild wind in which Massey looks as tall as John Wayne
Arch Stanton said on 20/Apr/14
Knowitall, any idea about Raymond Massey? He was listed at 1.85, yet looks an inch taller than Milland in Reap the Wild Wind and was also the same height as Cary Grant in Arsenic. Yet Milland looks as listed here next to Wayne and most other actors I've seen him next to.
Arch Stanton said on 20/Apr/14
Oh no, Raymond Massey looks an inch or so taller than Milland in the film. I didn't have him pegged at anything over 6'1".
Arch Stanton said on 20/Apr/14
Yeah, I see a little over 2 inches difference between him and John Wayne, whether or not you believe Wayne was a full 6'4" or not, he looked near 6'1.5 in comparison. At 57 minutes he looks taller but Wayne's posture isn't great but at 1 hr 2 minutes I see a bit over 2 inches difference.

Not the best of films or acting. Milland's character is a dandy and a bit annoying. A pleasure to look into Paulette's gorgeous blue eyes though, and I always enjoy seeing films of that period in colour as I'm sure most of us tend to think that the world was black and white back then LOL..

Go to the fourth color image down:

John Williams was six-one. He was no taller than Cary Grant in To Catch a Thief.

Milland was still a solid six-one when I met him. And by then he was in his seventies.

Arch Stanton said on 14/Feb/14
LOL Knowitall I think it's pretty obvious, I was winding up any potential visitor who's into Wayne that's all. You can see he's leaning! One thing which confuses me is that Milland actually looked a bit taller in comparison to Jimmy Stewart than Cary Grant did in the 30s yet by the late 50s Grant actually looked a bit taller than Milland. As Knowitall says though Milland aged prematurely and looked older than his years by 1960. It is quite possible he began losing height in his 50s. Another thing is that John Williams had him by almost 2 inches in Dial M. Williams looked nearer 6'3" to me though. Anyway I've seen Millannd in a good half dozen films and I concluded based on the observations with his costars that he was a solid 6'1". He could look a bit taller and a bit shorter at times, 186 is sort of like my mean guess!
jtm said on 14/Feb/14
6'1 is accurate.
Gonzalo said on 14/Feb/14
I always thought Milland was around 1`85. In the pics I`ve seen of Milland next to James Stewart he can look taller than that since he looks only an inch shorter. However in Beau Geste Milland is minimum two inches shorter than Gary Cooper. So, 1`86 for Milland looks reasonable.
Knowitall said on 13/Feb/14
Arch, Wayne is seated in a courtroom in that shot. Or are you trying to pull our legs?

I met Milland. He was six-one. He wasn't in good health when I ran into him.

With John Wayne, proof that Wayne was 6 ft without his lifts ;-] Ha that'll wind up Outlaw and co heheee.

Arch Stanton said on 12/Feb/14
186-7 peak looked right next to Jimmy Stewart. I suspect he began losing height in his 50s though. He was a heavy smoker and although I think he was the same age as Grant he looked a good 10-15 years older by the late 1950s and his posture looked poorer too. He looked a strong 6'1" next to Jimmy Stewart I thought in 1936, there wasn't much in it, there's a few photos if you g image but by the late 1950s I think he started looking nearer 6ft. There's one photo with Cary Grant and he looks a bit shorter taken around 1960 I'd say looking at Grant. Although he still looked pretty tall in 1954 Click Here with Wilder and Holden, visiting probably on set of Sabrina. Holden is further away though. There's still a few of his films I'd like to see but I think 186 is a good shout for his peak but I think he could look a bit shorter than that by the late 1950s and 1960s.
Arch Stanton said on 12/Feb/14
Yea that's a great addition, diolch as we'd say in Wales! He was definitely shorter than John Williams in Dial M or Murder although I suspect John Williams was nearer 6'3" he looked pretty lanky. He looked between 6'1" and 6'2" next to Jimmy Stewart in Next Time We Love too etc. Sam can you remember how he fared next to John Wayne in Reap the Wild Wind?
Celebrity Heights A-Z
A
B
C
D
E
F
G
H
I
J
K
L
M
N
O
P
Q
R
S
T
U
V
W
X
Y
Z
Random Celebrity
Latest Star Heights