Thea Trinidad is an American professional wrestler, who has wrestled under the ring name Zelina Vega. She once said "Yeah I'm 5' tall.", but said on a couple of occasions "I'm 4'11". 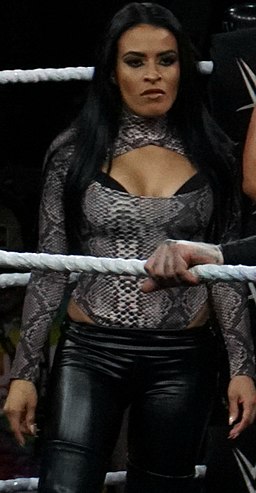 My height is an advantage not a disadvantage

Linke said on 10/Dec/19
Rob, would you consider adding her ex-fiancee Austin Aries? He is a former World champion in his own right (albeit in TNA). He recently made an interesting claim as being smidge under 5'8", which seems very honest. He claims that height around 1:04:45

Editor Rob
It matches up with another quote from him. I think it seems reasonably honest.

HEIGHTAN said on 17/Aug/19
My guess for Andrade is 5'9". And one would think WWE would bill him at 6 foot. Andrade appears about the same height as Charlotte in photos barefoot on beach or working out wearing sneakers. Also fits my guess for Zelina as she is just below his shoulders. She is 4'10 tops
Kavi Singh Gill said on 9/Aug/19
Does anyone know Andrade's real height? I've seen lots of comments here saying 5'9.75 but someone that height in WWE would be billed at at least 5'11 or 6'. WWE rarely, if ever, bills their superstars lower than their real height.
ADD said on 15/Jan/19
Andrade looks way bigger than 5’9
Nik said on 4/Jan/19
On some sites her billed height is said to be 5'1"!
Christian 6'5 3/8" said on 26/Dec/18
@Michael

Michael Allen said on 25/Dec/18
I'm thinking even 4'11 might be a bit generous. I was watching her in the ring at the Evolution PPV, and I know that the top rope for WWE rings is set at 5', and she was clearly SEVERAL inches below that.

A legit 5'9.75" guy wouldn't ever be billed by WWE at 5'9". WWE would never undermine their wrestler's height. The only exception was Billy Gunn but that's about it. Plus that pic with Mcintyre is bad, since Andrade has a big camera advantage.

Here in this video, Zelina makes Black look like giant especially at 04:16

I'd say a weaker 6'0, like most people who claim to be 6'0, so more in the 5'11 range. He has a slim frame and always maintains good posture when standing. I'd say we will have to wait until joins the main roster and see him in front of the likes of Seth Rollins, Dean Ambrose etc

But yeah for now I'd estimate 5'11 for Aleister Black. What would you say Rob? Anyone?

Editor Rob
5ft 11.5 isn't impossible for Black, he does look to have a considerable advantage over Zelina who is really 4ft 11 at most.

Cliff said on 22/Nov/18
She looks no more than 4'10."
LDS said on 1/Nov/18
Got to agree with the last comment. I don't know how tall she is exactly but she's deffo not 4 ft 11. This isn't great for guessing her height as you can't see footwear and the angles not great but it's good for giving you an idea just how tiny she is. She makes Peyton Royce look like a giant.

Nice addition, I must say if she is barely 5'0 herself how tall is Andrade Cien Almas? She makes him look like a giant and he is has been listed 5'9 to 5'11, and he can look that at times especially with her. What would you say Rob? Anyone?

Editor Rob
he can seem a big head taller than her, so at least 5ft 9 maybe more.

littlesue said on 16/Feb/18
little Sue - looks about that, look at the size of the shoes!! about 4 sizes too big, lol
heightchecker34 said on 15/Feb/18
I don't watch NXT, so I have no idea, I am just going by random pics. How tall do you think her fiance and wrestler Austin Aries is? He towers over her, so probably in the weak 5'7.5 range. He looks around half and inch taller than 5'6.5 Neville, because Neville looked similar to Jon Stewart.