Dutch professional wrestler. In an interview by Iain Chambers he said "I am by no way, shape or size, a giant. I’m 6 feet, 250 pounds. Now back in the day when I started I was barely 140 pounds" 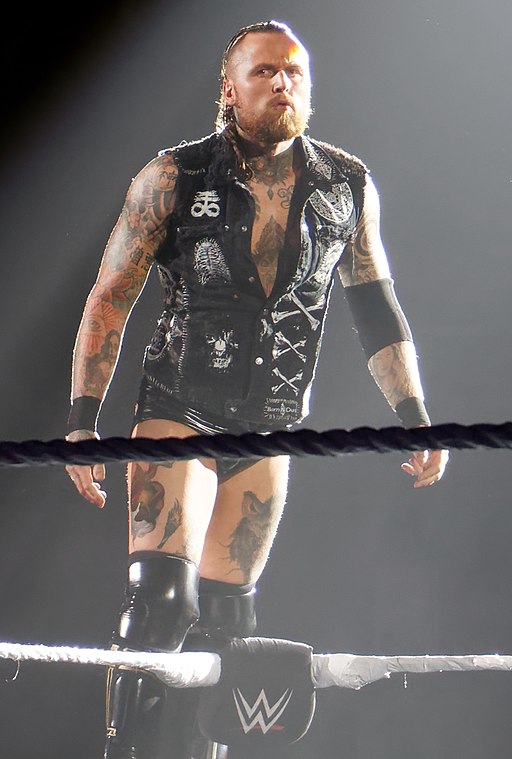 I guess they'll try adding a few inches for him now and then decrease it from time to time.

But most definitely, he is a weak 6'0 as Rob has him listed. He can look taller because of his lean build and his broad shoulders.

Vexacus said on 10/May/20
He was billed as 6'3 in Money in the Bank tonight. WWE just list the guys according to his characters . In this case , an evil being from the darkness like the Undertaker. 1 inch more is a good billing , 2 inch more is max for most guys .
Christian 6'5 3/8" said on 24/Apr/20
@Vexacus
The only other cases I can think of, are Billy Gunn (billed 6'3" at one point) and (possibly) Andrade, as he can look over 5'9" at times. There's also a wrestler on AEW named Wardlow, who's billed 6'2", but I think he's more 6'3" in reality.
Linke said on 21/Apr/20
Buddy Murphy: 178 cms
Aleister Black / Tommy End is 180 cms tops
Vexacus said on 24/Mar/20
Weak 6ft, tough guy and great wrestler , he's gonna be a world Champion soon .
Extreme case of being billed lower than his real height. The only case I know in WWE.
Dylan Harris said on 10/Mar/20
Rob : how much of a height difference would you say there is between him and seth Rollins Click Here at 1:46

How tall would you estimate Buddy Murphy based on this video at 01:56?

Glenn forshey said on 21/Feb/20
They say aleister black weighs 215lbs.he only looks like 180 to 195lbs.he has no bulk on him. I weigh 180 at 5'11 and if i gained 30 lbs. To add up to his weight of 215,i be alot bulkier than him. I wish they give real weights.not scripted weights.
Ali said on 8/Feb/20
He has got shredded compared to his early NXT and Independent wrestling days; his shoulders and traps are broad af and gives him a taller impression. I'd say 5'11.5 max for now, we need to see him stood in front of the big guys to know for sure now.
TheBat said on 23/Nov/19
@Christian

@ Sakz - Thanks for the New Year wishes! By the way, where are you from?

I can't speak for everyone else, but I feel more alive and energized at 220-225lbs than I did back when I was nearly 250 a few years ago.

Sandy Cowell said on 3/Jan/19
@ Sakz - Ah, thanks for that! Yes, I always love Christmas, and I am still enjoying it because the Christmas tree is legitimately up! When it comes down, that's when I start feeling a bit blue!

A whole stone can make a huge difference to how someone looks and feels, not to mention one-and-a-half stone. Every individual has his or her own ideal weight, and the charts are there as guides. If you feel good at 10 and-a-half stone, and have plenty of energy, then that's what's best for you honey!

Not sure where he got 250lbs from lol I'm sure I heard him do a similar interview wmie he stated 6'0 and 215lb. Possibly a quote error? But anyway yeah I'd say a weak 6'0 too, very slim frame and maintains impressive posture when standing straight. Easily looks a giant in front of his wife Zelina Vega.

@berta Definitely no 250 pounder. Around 225 lbs would be more accurate.

I know he's got a slight Dutch accent which could throw some people off. Could he have been saying 215…and it was just a typo on the author's part?
berta said on 25/Dec/18
He doesnt really look 250 pounds. I would have thought mutch less but at the same time photos can lie
Christian 6'5 3/8" said on 24/Dec/18
He's obviously not 250 lbs, at least not currently.
Sandy Cowell said on 24/Dec/18
At just 10 stone, Aleister must have looked extremely skinny. Well, he's gained nearly 8 stone now, so that hardly applies any more!