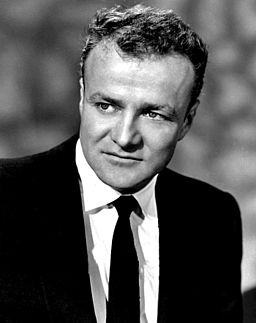 Average Guess (3 Votes)
5ft 11.33in (181.2cm)
Don Butcher said on 7/Oct/20
In Family Affair he looks very tall next to the children, 5 foot Kathy Garver and 5’8” Sebastian Cabot. Though most of the taller women and men that come on the show make him look no more the 5’11”.
Rich Paul said on 14/May/20
I doubt Keith was any taller than 5-10. I base that on how short he looked in the movie Five Against the House. Check out this photo. He’s visibly shorter than both Guy Madison & Kerwin Matthews.

Hope you are well. I think Mr. Keith’s “Family Affair” co-star, Sebastian Cabot, would be an interesting addition to your database.

Editor Rob
He was described as 260 pounds and 5ft 9 around time of his death, though that seems optimistic, a bit under that.


Tom said on 28/Jun/16
Either Keith was shorter than his official height or Borgnine was taller. Click Here
Shadow2 said on 27/Jul/15
By the time of his TV series "Hardcastle and McCormick", Keith was a flat 6' alongside legit 6' 1" Daniel Hugh Kelly. Rob, can you please add that series to Keith's bio, it successfully ran for three seasons in the 1980's I think. In "Family Affair" John Williams temporarily played the Sebastian Cabot role while Cabot was unavailable, Williams (by then in the 6' 1.5" range) was slightly taller than Keith.
Arch Stanton said on 23/Jul/15
He started to appear in loads of films I was watching from the mid 60s!
Arch Stanton said on 23/Jul/15
Cheers Rob, can you add TV series The Westerner and Crusader and films The Deadly Companions, Reflections in a Golden Eye, The Russians Are Coming, the Russians Are Coming, The Yakuza and The Wind and the Lion, seems the best shout as he could look 6 ft 1 with Maureen o Hara barefoot in Parent and 6 ft with Jimmy Stewart and Maureen in Rare Breed. Near 6 ft 1 but not quite makes most sense.
Sam said on 23/Jul/15
For some reason I haven't seen that much with him, but this is probably a good call from what little I've seen. I've always been curious to watch (but haven't) Sam Peckinpah's TV series The Westerner starting Keith, which I read about in Peckinpah's biography. From what I recall, Peckinpah really put Keith through the ringer on that, quite typically for Peckinpah.
Sam said on 23/Jul/15
This guy aged rough...he was only 2 years older than Christopher Lee but looks more than a decade older IMO there.
Celebrity Heights A-Z
A
B
C
D
E
F
G
H
I
J
K
L
M
N
O
P
Q
R
S
T
U
V
W
X
Y
Z
Random Celebrity
Latest Star Heights