American actress, best remembered for films such as To be or Not to be, Made for Each Other, My Man Godfrey, Twentieth Century, Nothing Sacred, Swing High Swing Low, No Man of Her Own, In Name Only and Mr and Mrs Smith. In a 1931 Photoplay article it mentioned her height was 5ft 6, weight 109lbs and vital stats: 34.5-28-38. Shoe size 4C. In a 1937 article, however, Carole gave her own description of her height:

During my career I've lost about 13 pounds. My height of 5 feet 5 1/2 inches hasn't changed, but I've lost inches around my hips, and have actually increased the width of my shoulders two and a half inches , mainly through playing tennis. My waistline is smaller 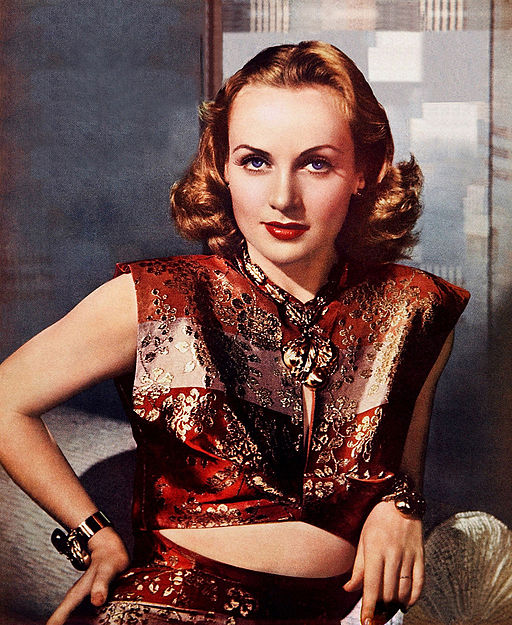 For a star from this era to register with me, she must have been very famous indeed. Yes, I know of her, and I'm no Arch Stanton. It would be of great interest if I knew which films of hers I've seen, so I'd better get into the task.

littlesue said on 19/Nov/14
She 5ft 2 on other sites and in a biog I read of her but she looked more 5ft 4, especially next to Gable.
Arch Stanton said on 3/Nov/14
Rob can you add some more films like Twentieth Century, Nothing Sacred, Swing High Swing Low, No Man of Her Own, The Arizona Kid, In Name Only and Mr and Mrs Smith? I love her to bits Sam!!
Sam said on 6/Nov/13
Gorgeous photo of her above...she was one of the best and obviously died too soon. She did look around this mark next to her husband Clark Gable. Too bad, in keeping with her bawdy persona, that she publically derided Gable's prowess in bed, LOL.
Josephine said on 12/Jul/08
The average height for females during those days in America was barely over 5 feet. She looked quite average in her films, I doubt she was that tall but I could be wrong!
Celebrity Heights A-Z
A
B
C
D
E
F
G
H
I
J
K
L
M
N
O
P
Q
R
S
T
U
V
W
X
Y
Z
Random Celebrity
Latest Star Heights