American actor best remembered for roles in films Singing in the Rain, An American in Paris, On the Town, Cover Girl, Inherit the Wind, The Three Musketeers, Anchors Aweigh and The Young Girls of Rochefort. In Betsy Blair's book 'Memory of all that' she had described him as '5ft 9'. 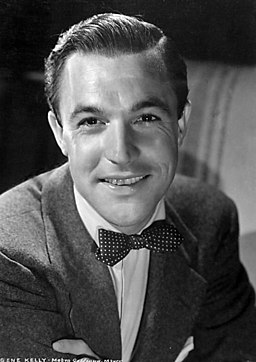 Average Guess (22 Votes)
5ft 6.5in (168.9cm)
Lars Heathcliff said on 4/Mar/19
My guess is 5'6". My grandfather, who stood at 5'6", claimed to have met him and said they were eye to eye.
greg lehmann said on 23/Oct/18
I guess 5'7" was Gene's correct height. But who was my favorite Gene Kelly dance partner? Jerry The Mouse of Tom And Jerry fame! When Gene and Jerry did that magical Anchors Aweigh dance sequence,5' sweetie Jane Powell called it "the greatest performance of a live action actor and a cartoon star in the same movie." It is! Then Tom And Jerry did a sensational underwater dance scene in 1953 in Dangerous When Wet with 5'9" Esther Williams,who Dick Clark nailed in 1958 when Esther was What's My Line? mystery guest. And Gene was much more innovative than what other directors were in his heyday. His 1949 musical On The Town was not just set in New York,but he filmed that musical,his first time directing one of his productions,DIRECTLY in New York City! (I don't think any director could do that today!) That movie also started many directors shooting movies directly at the setting of the movie. Another example would be Panic In The Streets. Director Elia Kazan shot that powerful 1950 crime drama in New Orleans! Kazan also shot On The Waterfront directly on the docks of New York City! But was Gene the greatest actor director EVER? Again,just like with saying if 5'3" Mary Martin was a better {eter Pan than 5' Cathy Rigby,or if Warner Oland or Sidney Toler was the better Charlie Chan or if Earl Anthony or Walter Ray Williams is the greatest professional bowler ever or even if Bob Barker or Bill Cullen was the better Price Is Right host,this will make a lively debate subject. While I give the best actor director nod to Clint Eastwood,Kelly would rank among the best actors who also directed their best movies!
Danimal said on 13/Jun/17
Arch Stanton said on 4/Mar/15
Rob, can you add a photo from Singing in the Rain era and also add The Three Muskateers, Anchors Aweigh and Summer Stock?

You're very demanding of Rob, always telling him to add more films.

Editor Rob
it is quite close for them, sinatra may have had slightly edge, can be hard to tell at times.
Arch Stanton said on 4/Mar/15
Rob, can you add a photo from Singing in the Rain era and also add The Three Muskateers, Anchors Aweigh and Summer Stock?
Arch Stanton said on 23/Aug/14
Rob can you add Cover Girl, I associate him most with Singing in the Rain and that! Marjorie Morningstar always a memorable role but I don't think that film was big enough to mention.
Sam said on 22/Apr/14
Rob, could you add An American in Paris, On the Town, Inherit the Wind and The Young Girls of Rochefort?
bloodbuzz said on 10/Apr/14
Click Here
looks at least 4" shorter than Sugar Ray Robinson, who's listed at 5'11. Boxers are never listed over either, usually they're shorter than what's billed, but 5'11 for Sugar Ray I agree with.
Arch Stanton said on 6/Jan/14
Hmm in some scenes Kelly in turn looks like he has the edge. Difficult to tell who is taller! Clearly they're very close, probably best to leave him at 171, but Sinatra to me does generally seem a bit taller.
Arch Stanton said on 6/Jan/14
What'd ya reckon? They look very close don't they but if you g image them I think Sinatra has the edge. In later years Sinatra looks noticeably taller, but that could be lifts doing the talking, I think he was known to often wear lifts later on. Click Here His footwear looked normal in all the films I've seen him in though.
Arch Stanton said on 6/Jan/14
Rob I think he's a wee bit shorter than Frank Sinatra in On The Town but they are close. Click Here In the film Sinatra looks a bit taller than that in comparison, they can't both be 5'7.5". Click Here looks noticeably taller there. 5'7.5" for Sinatra has looked accurate in everything I've seen him in seeing him with Brando etc. Perhaps 5'7 or 5'7.25" for Kelly?
Arch Stanton said on 30/Aug/13
At 88:50 he again looks shorter than 5'7" Donald and I think throughout most of the film Donald seems to edge him out. Even way, I think it rules out anything over 171, 5'7" flat more likely than 5'8" much less 5'9"! He can sometimes look 5'8" though.
Arch Stanton said on 30/Aug/13
See what I mean pause at 20:27 and he looks fractionally shorter than Donald. How can he go from looking an inch taller? Either way it makes the 5'9" claim look hilarious..
Arch Stanton said on 30/Aug/13
Rob pause at 14:24 Click Here Donald O'Connor was listed at 5'7", Kelly looks about an inch taller don't you think? Possible of course that O'Connor was 5'6.5". Kelly could have been 172cm?
Arch Stanton said on 30/Aug/13
What about Jean Hagen? Kelly looks about an inch taller than her in heels, I'd guess 5'4" ish.
Arch Stanton said on 30/Aug/13
Rob can you add some of his others films like An American in Paris and Marjorie Morningstar? It's Singin' rather than Singing. Singin in the Rain is confusing me, he can both look taller than shorter than Donald O' Connor who was listed at 5'7" I think.
Arch Stanton said on 28/Aug/13
Rob, any idea how tall Nina Foch was? She looks near 2 inches taller in American in Paris not sure what her heels were like though. Click Here LOL he looks so much like Seagal did as a young man!