American film-maker, best remembered for directing Bringing Up Baby, Rio Bravo, His Girl Friday, Only Angels Have Wings, Red River, Ball of Fire, The Big Sky, Scarface, The Big Sleep and Gentlemen Prefer Blondes. In a 1972 biography yearbook he was described: "Howard Hawks is six feet one inch tall" 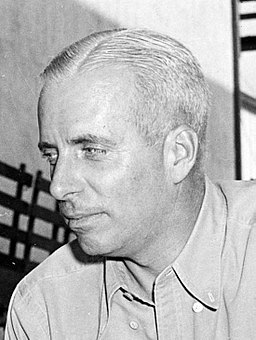 Average Guess (4 Votes)
6ft 0.94in (185.3cm)
Rampage(-_-_-)Clover said on 16/Apr/17
Wouldn't rule out 6ft1½. Similar features to Raymond Massey who was also described as being 6ft3.
Rampage(-_-_-)Clover said on 1/Aug/16
Hard to imagine 6ft3 barefoot for him. Maybe his thin build could give that illusion. But a fraction over 6ft1 is possible.
Sam said on 18/Nov/15
I still think he looked a little strong for a flat 6'1" but it's obviously more accurate for him than anything approaching 6'3" barefoot.
Gonzalo said on 17/Nov/15
One of the best directors ever. He looked at least 6 feet tall
Sam said on 13/Nov/15
Good job mentioned his best films as well. Could you add Ball of Fire (I'd personally rank it above Sergeant York among his Gary Cooper collaborators) and The Big Sky (although little scene today, it's one of his best & included in 1001 Movies You Must See Before You Die) to his credits? He was for sure one of the most versatile directors, mastering so many genres. I think Bringing Up Baby is my favorite Hawks film, even though he didn't rate it well himself.
Sam said on 13/Nov/15
I wonder if the profuse 6'3" claims for Hawks were shoed/booted measurement for him.

Editor Rob: 6ft 3 definitely seems a rather large figure, from what I've seen I agree more towards 6ft 1 barefeet than 6ft 3 barefeet.
Sam said on 12/Nov/15
Thanks for adding him too! I guess this is pretty good, but at times I think he can look too strong for 6'1" flat. There's some photos I've seen with him and Cary Grant and sometimes he has the edge on Grant, but they look pretty close, but most of these are not online. The few photos online where's he near John Wayne were towards the very end of Hawks career (Rio Lobo) and Hawks had obviously lost some height, more than Wayne had. I think 6'1"-6'1.5" range is arguable for Hawks.

Editor Rob: it is always possible he could have fallen into a stronger 6ft 1 range than grant, who at times could look a little under that.
Celebrity Heights A-Z
A
B
C
D
E
F
G
H
I
J
K
L
M
N
O
P
Q
R
S
T
U
V
W
X
Y
Z
Random Celebrity
Latest Star Heights