American actor, best remembered for roles in film such Psycho, Spartacus, Imitation of Life, Back Street, A Time to Love and a Time to Die, Thoroughly Modern Millie and Tammy Tell Me True. In a 1964 article he said "I'm 6 feet 4 inches".

He was so tall, taller than me in fact. - Michael Caine 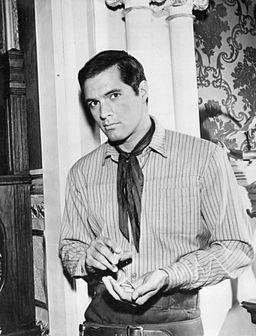 Average Guess (16 Votes)
6ft 4.02in (193.1cm)
Tall Sam said on 12/Feb/18
Gavin was unpopular with (some) Hollywood directors (Hitchcock liked to call him "the stiff") and unpopular in politics (in his poorly received time as a diplomat to Mexico for his friend Ronald Reagan, a chapter I didn't know about), but he starred in some classics films that will always be watched, so he has a great legacy. One of the first time I noticed actor heights was him being skying over Anthony Perkins in Psycho since Perkins had looked really tall up to that part of the film.

Rob, could you add A Time to Love and a Time to Die and Thoroughly Modern Millie to his credits?

Hollywood is never what it seems. They went to great lengths with Gavin to tone down his height, Olivier would have worn lifts in their scenes and it would have been staged to make it look nearer 4 inches.

Arch Stanton said on 15/Oct/16
Honest 6'4, see him with Eastwood, but in his 50s and 60s films brought out all the tricks in the book to diminish his height on screen and make him look just normal tall!
Shadow2 said on 15/Nov/15
Gavin appeared in a 1964 episode of the western series "The Virginian", and appeared about 4.5 inches taller than 5' 11" Lee J Cobb. He did several scenes with Michael Forest, a strong 6' 3" actor, and only at certain times seemed possibly half an inch taller than Forest. I'd give Gavin a maximum 6' 3.5" height. Apart from resembling Tom Tryon, Gavin could be Rock Hudson's younger brother!
Tom said on 24/Aug/15
He only looked 4 inches taller than 5'10 Laurence Olivier in Sparticus. 5 inches at a stretch, and Olivier was in his 50s by then so perhaps not the full press office 5'10. I'd say 6'3 tops.
Shadow2 said on 19/Apr/15
Has anyone ever noticed the similarity between John Gavin and Tom Tryon (who was also very tall, at 6' 3").
KROC said on 14/Apr/14
He looked 6'4 to me in Spartacus. He has long legs and a medium torso, which to me, gives him a taller impression.
Sam said on 6/Nov/13
He was a solid 2 inches if not a bit more over Anthony Perkins in Psycho.
Arch Stanton said on 9/Sep/13
His torso again looks small in Spartacus, I think it's because he was very slim. When he's sitting down it's really hard to imagine him being 6 ft 4, he really doesn't have the torso of a 6'4" guy but he really does seem around it, a full head on Tony Curtis.
Arch Stanton said on 5/May/13
Leigh must have been stood on a box in the opening scene, it was very common in Hollywood for actresses to stand on boxes next to guys over 6'2".
Arch Stanton said on 1/May/13
He does look as if he has the edge on Clint and certainly looks 6'4" in that photo. But his body frame in Psycho surprises me as his torso doesn't look very long, doesn't have the typical frame of a guy of that height in Psycho anyway.
Arch Stanton said on 30/Apr/13
He certainly looks a solid 6'4" next to Clint, but see that Psycho clip he gives off a much shorter impression doesn't he?
Arch Stanton said on 30/Apr/13
Rob see from 2:55 Click Here Pause at 4:47,. 6'4??? Is Janet Leigh on a box? Just he doesn't have the torso of a guy anywhere near 6 ft 4....

[Editor Rob: he looks reasonably tall In a still beside her, in some movies I'm sure for framing upper body shots especially, standing on a small object has been used many a time.]
Arch Stanton said on 30/Apr/13
6'4"??? Yikes, I didn't get a very tall impression of him in Psycho, although he was taller than Anthony Perkins so probably was near this. In the hotel room scene at the beginning he is barefoot and didn't look this tall, his frame didn't look like that of a legit 6'4" guy either.
Mr. Kaplan said on 25/Dec/10
He was bigger than 6'3" Fred MacMurray. 6'4", I buy.
Shadow2 said on 25/Dec/10
Gavin was probably 6'3.5", 6'4" in shoes. He would have had a good acting career but left to do other important things, including becoming a diplomat. He always reminded me of two other tall actors, 6'3" Tom Tryon, and Stuart Damon who was close to 6'3" during his "Champions" period.
Shaun said on 10/Dec/10
OK Eastwood looks 6'3.5" in that photo, the other actor is standing at an angle so he looks taller.
Jake said on 15/Jul/06
Well, he maybe 6'4" or a little under. He looks similar height to Eastwood, maybe a bit taller, but I do not believe Eastwood was ever 6'4".
Larry said on 13/Jun/06
:-) They're close, for sure. Anyway, Gavin NEVER looked under 6'3" and ALSO looked like Clark Kent when he was younger.
Anonymous said on 12/Jun/06
Larry, to my eyes Gavin looks slightly taller than Clint in that photo. Eastwood is standing bolt upright and Gavin leaning a little.
sam said on 12/Jun/06
He did indeed look to have about 2 inches on Anthony Perkins in Psycho.
Gonzalo said on 12/Jun/06
He is very tall, that`s for sure.
I think her mother was of mexican descent. He was bilingual in English and Spanish. If we watch his film Pedro Páramo based on the great book by Juan Rulfo you could see that he spoke a perfect Spanish.
Larry said on 12/Jun/06
Gavin looks a little less than Clint in that photo. So maybe 6'3" at that time?
J. said on 11/Jun/06
Did you know he was once the US Ambassador to Mexico?