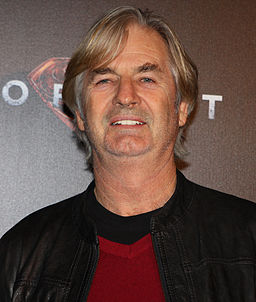 Editor Rob
At this stage, any holiday would be great! Jenny wants to go back, but definitely not up Wolf Creek territory! I'd hope one day Jarratt does a convention in the UK. When cons start up again properly, I've no idea.
Mark Allan said on 22/Jul/20
Rob, In Wolf Creek 2 Jarratt look quite a bit taller than Joe Mangel, what would you say the difference was between them it looked as if Jarratt had nearly 10cm on him what you think?

⭐ The guy who played the gum-chewing nincompoop must have known he'd have to act like an idiot for that part, and likewise with Joe Mangel. Well, ten out of ten to each of them for fulfilling the roles perfectly! 👌😃

I often find that Australian horrors come with a large dollop of humour. They can be quite hard to watch,'The Loved Ones' and 'Wolf Creek' being prime examples, and without the promise of a laugh here and there, I might have been tempted to turn them off before, as I did once with 80s video nasty 'Driller Killer', which is, I'm 95% sure, American. Cheers Rob! 😁👍

Miss Sandy Cowell said on 30/Jun/20
I've just seen the opening scene of 'Wolf Creek 2'. A couple of smart-@rse patrolmen, who swear their heads off, give Mick Taylor a driving ticket, or something similar, maybe for a faulty tyre. "Are you sure you wanna give me this?" he says to them. "Sure I do!" replies the cocky one (I think!), the other one being a gum-chewing, gormless-faced moron, and equally full of himself!

Within the next few minutes, they deeply regret their decision. Well, the gormless one gets three-quarters of his head blown off from a distance so he has no time to contemplate the matter and if you think that's bad, the other, cocky one receives the Mick Taylor spinal incapacitatement treatment, after which he's dragged to his patrol car and doused in petrol. Mick (John Jarratt) makes a few sarcastic comments as his latest victim is begging Mick that he wants to see his kids again, but Mick simply flicks his cigarette at him and sets fire to the car, complete with corpse and suffering patrolman.

His speech is comical and it isn't exactly easy to like the two patrolman, so when I first saw this with my boyfriend, we were giggling away, apart from the seeing of the kids business. The next scene is anything but amusing, but there is more light-heartedness to follow in this film in the form of a Q&A between Mick Taylor and a young and very plucky male tourist, whom Taylor ends up liking and setting free.

In no way can John's character be said to have a good side; he is sadistic in the extreme, so when he lets the lad go, it makes for an unusual ending.

He is taller than both the patrolmen in the introductory scene, particularly the young, silly one. He comes over as an abnormally strong man, especially as he celebrated his half-century birthday a fair few years back, but of course, this is a movie! John's posture is good, so seeing as there is just the one box, he's getting the full 6ft and three-quarters of an inch from me tonight.

@ Littlelee - Thanks for that! That means he'll have been 60 when he made the second helping of 'Wolf Creek'. Cheers Lee! 😁👍👍

Editor Rob
What's interesting is that Jarratt had 185cm on his resume and the cop (Joe Mangel) had 183cm on his showcast page.
I'm sure if you seen it, there was a lot more than 2cm between them...

Littlelee5ft6 said on 8/Jun/20
He is 67 sandy so he may be closer to six foot by now or even a little shy of six foot and hence why Angus may look taller
Mark Allan said on 24/Apr/20
Rob, Have you ever met John? From what I’ve seen in the Wolf Creek films and Tv Series he can pull off the full 6’1 what do you think?

Editor Rob
Yeah he has been in a few of them.
Miss Sandy Cowell said on 27/Aug/19
John is shorter than Angus Sampson in '100 Bloody Acres' so Angus needs an upgrade!


I agree with it. Falls more in line with his 185cm claim but like you said earlier, not necessarily quite a solid 6ft1 guy

Editor Rob
Yeah I looked at him and thought 185 he has on his agency is actually believable.

Ryan Besliy said on 21/Nov/18
Rob, what would you say this man weighs? He mentioned he had to hit the weights a bit to bulk up and look tougher for his role in Wolf Creek.

Editor Rob
Possibly in 180-90 zone, but clothes can hide quite a few pounds.
Sandy Cowell said on 15/Oct/18
I watched John in a film the other day about a rancid crocodile. It made a change to see him playing the part of a decent, respectable person. In fact, he was probably the nicest member of the cast!

Now this crocodile was vile! I used to get some rather pretty and delicate models out of Zoo Time Biscuits and then later the very same plastic models were in cereal packets, but the crocodile in this was utterly evil, and about as bloody horrid looking as those from your worst childhood nightmares. Yuk! You could see that no tic-birds* had been near his teeth in ages!


John can have 6ft and half an inch!

lee168cm said on 18/May/18
He's so scary in wolf creek and at a strong 6 foot range would tower over little me. I would hate to bump into him in a dark alleyway after seeing him in those wolf creek films. He comes across as so intimidating he gets 6 foot and one half inch from me
Dream(5'9.5") said on 18/May/18
@FE

What do u think Rob?

Editor Rob
Based on those photos I'd have guessed John was at least 1 inch taller.
Dream(5'9.5") said on 17/May/18
Rob, I almost mistook him for John Cleese!
Leon Rodriguez said on 17/May/18
Rob your spot on, I once met him at a supermarket, both of us wearing flip flops in the summer time, im exactly 184.5cm and whilst i shook his hand we were equally as tall as each other so 6'0.5 is perfect.
Tall Sam said on 16/May/18
Could you add Picnic at Hanging Rock, Django Unchained and McLeod's Daughters to his credits? I thought peak he could've passed for a 6'1" guy but it's hard to say.
Dave178 said on 15/May/18
I've met him a few times at Supanova Pop Culture Expo and I'd say he looks closer to 182cm (I'm 178cm and he was only a bit taller than me), although it's possible 184cm could be a peak height for him.
Rampage(-_-_-)Clover said on 15/May/18
Rob, why not 185cm?

Editor Rob
From what I've seen I think he is over 6ft but maybe not 6ft 1
Sandy Cowell said on 15/May/18
Ha ha ha! Thanks Rob! I'm really pleased to see John's debut on Celebheights!

As 'Horror' films go, and if you don't take them too seriously, John's character of Mick Taylor is a very amusing psychotic maniac! I have answered the phone in his voice to my Jim, but I'd better not repeat what I said: it's rude!

John is actually a loving family man! I think he has six children, at least one of whom has followed him into the acting business! He is beautifully cast as Mick Taylor, as a small-statured man wouldn't get away at all convincingly while telling the nosy and equally foul-mouthed cops that he kills 'roos' for a living, thereafter carting their carcasses into his van and carving them up - yeuch!

Well, we know what he really does!

I give John Jarratt 6ft0.5 and a big welcome to celebheights, the funny *ucker! 🙆