American actor best remembered for starring in 1950's Tarzan movies, and also for roles in Apache Gold, Treasure of the Silver Lake, The Return of Doctor Mabuse, The Girl in the Kremlin, Jungle Heat, La Dolce Vita and Old Shatterhand. 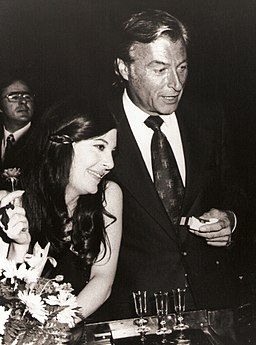 Average Guess (3 Votes)
6ft 4in (193cm)
joe### said on 4/Nov/17
weight 225 pounds
joe### said on 6/Jan/17
Disadvantage of this barefoot look like a good 6'4 with Raymond Burr
Click Here
Rampage(-_-_-)Clover said on 27/Apr/16
Well Andrea, they respect my opinions more than yours. But I don't look for acceptance from strangers online and I certainly do not intentionally insult people. You do both..CONSTANTLY! This site is just a bit of fun but forgive me for being somewhat amazed by what Rob Paul has created over 10 years. It's insane...in the most positive way. It has also taught me lot about height in general. Rob is the go-to-guy for this stuff. But anyway...you just insult people if they don't agree with you which is almost always. You badger Rob all the time if someone's height listing doesn't fit in with your messed up online trolling agenda. You've been going at it for years, getting on people's cases...people you've never before. Surprised you haven't been Banned. I don't upgrade everyone and I certainly don't think everyone is measured when they wake up. I do believe it's scientific fact though that the human body is at it's tallest the second you step out of bed. You cut heights down like your cutting down trees in a forest. You have Hugh Jackman at 6ft, right? Changes every week and says a lot about your mental stability. You are right about one thing though. I'm not 6ft3½....I'm actually 6ft4 ;) My girlfriend measured myself a decimal shy of 193cm at the stroke of midnight after a very long day on my feet (the lowest anyone can get to).
Andrea said on 14/May/15
Of course i can argue a couple cms difference but i base that on real differences (between the top of the heads of two people), not on proportions which is basically nothing! You seem to base everything on it! I doubt Rob lists people he meets just looking at their "proportions" or he could even stay at home, look at some photos of a celebrity and say "this guy has the proportions if a 6'4 guy, i'll list him at that"! :) we're basically talking about nothing, Arch! And Rampage, do you really think there's somebody who cares what YOU think? You're a notorious troll on here, you upgrade everyone, you think people get measured out of bed and you probably live in a world where everybody is "6'2-6'3"! You're either a troll or mentally ill, i just hope it's the first one for you ;) And i bet you're not even the 6'3.5 you always claim! Get a life, man!
Rampage(-_-_-)Clover said on 13/May/15
Andrea, nobody cares what you think.
Arch Stanton said on 13/May/15
And yes, you can get the impression somebody is a bit taller WITHOUT comparisons with people. But the impression might not always be accurate. Rob for instance said Manganiello walks about like a shorter guy but really looks around that 6'5 mark when stood his best.
Arch Stanton said on 13/May/15
Andrea says on 12/May/15
O yeah, he certainly has the proportions of a big 6'4 guy! Why losing time at guessing people's heights when the only thing you must do is looking at... proportions :)
Also, it's incredible how you can say "here he looks 193" and then "here he looks more 193-194" based on nothing, i mean on proportions! As if you could tell 1-2 cms just looking at guy, with no height comparison...

LOL. You spend most of your time on here Andrea moaning about Rob's 6'4-6'5" listings being inflated and saying most of them don't look it and are under 6'4". You're also arguing over a couple of centimetres. And yes, I think you can spot the difference between a guy who might be weak 6 ft 4 and one who might be a strong 6'4" and pushing 6 ft 5. A guy like Satyajit Ray, or a peak Jeff Goldblum you could say they could look 194-5cm range. It might be an illusion based on build or "proportions" and not really detectable to the human eye, but I'm sure in person Rob can tell the difference between a guy in 192-3 range and one in 194-5 range, that lankier edge, they appear more "looming" in person.