American professional baseball pitcher who has played for the Toronto Blue Jays and New York Mets. He said once "Fact of the day: officially measured in at 5 feet 7 1/4 inches" 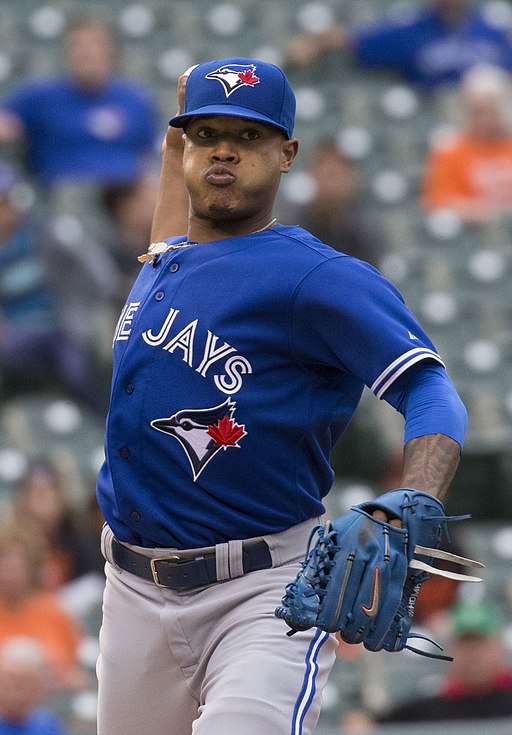 While I think 6-1 may be too short for Verlander, the 6'5" listing he's always had has always been an overlisting. Though, I'm still not sure by how much.

I know you're Irish and you don't watch baseball, but it's really hard to tell the height of pitchers.

Sonny Gray (listed at 5'10'') looks tiny on the mound and sometimes if he wears socks over his pants looks sub 5'7''. Yet guys like Yordano Ventura and Tim Lincecum, both only a inch taller at 5'11'', look so much larger than they actually are on the field. Hell, even Marcus Stroman looks taller than Sonny Gray! Then, we have Chris Archer at 6'2'' yet looks like a lanky giant on the field whereas Justin Verlander, at a whopping 6'5'' looks no more than 6'. Watch these videos, and you'll know what I'm talking about:

Editor Rob
I think when somebody is on their own, sometimes the height of the camera, how much zoom is involved might have some small effects...but a quick glance of Sonny and others, he doesn't really seem anything less than average range.

viper said on 13/Apr/18
Refreshing to see an athlete state his real height over his listed height. And an exact measurement no less
Thatguy61 said on 16/Dec/17
Rob could you add dustin pedroia on here? I've always wondered what his real height is. He says 5'8" but I just don't see it. He looks shorter than stroman.
heights said on 18/Nov/17
Rob did you drop a few milimeters?And whats youre absoulute low?

Stroman - depending on the time he got measured - potentially might be only 5ft 7 late afternoon.

Editor Rob: I hadn't weighed for a while, but just checked this moment and sitting on 176.5ish pounds.

as for Stroman, being short hasn't effected his ability to be a good player.

In america there definitely seems to be an emphasis on height/weight.
MD said on 16/Nov/17
Yeah, baseball is very underlooked when it comes to "sports heights." The over listings are just as bad as basketball and often worse. The reason Stroman is so honest is that he's built an entire brand around overcoming what are seen as physical shortcomings. That's rare in sports in general, but particularly in the inflated baseball measurements.
Lmeister said on 16/Nov/17
First he was listed 5ft9 then dropped to 5ft8, now he declares 5ft7. Some sources still list him 5ft9. Shorter sportsmen are usually listed bigger (heigh/weight wise). Former NHL star Paul Kariya was listed 5ft10/5ft11. In recent interview he said that he is only 5ft9.
Christian-6'5 3/8 said on 16/Nov/17
Pretty rare to see an MLB pitcher this short. Majority of MLB pitchers are 6'+
Chappy said on 15/Nov/17
I thought I knew all below average and above average height of a MLB player but I guess I was wrong. For some reason I always thought he was average player height. You can never really tell as well when they are on the pitchers mound.
Rob, can you please list Alex Bregman, claims 6ft in MLB. But some 5ft 11 listings in college. I think he is a legit 5ft 10 but I'm still unsure.
MM said on 15/Nov/17
He probably drops under it though, that won't be an afternoon measurement but earlier in the day
Shredder said on 15/Nov/17
For being listed 5' 8 and he admits to 5'7.25 , I believe him
Paul said on 15/Nov/17
Baseball is very underrepresented here, in particular because MLB listings are often way off. I approve of these recent additions.
Nik said on 15/Nov/17
Well, it is nice to see that he is telling the truth!
Celebrity Heights A-Z
A
B
C
D
E
F
G
H
I
J
K
L
M
N
O
P
Q
R
S
T
U
V
W
X
Y
Z
Random Celebrity
Latest Star Heights