German actress, best remembered for roles in films like The Blue Angel, Destry Rides Again, Witness for the Prosecution, Judgement at Nuremberg, Shanghai Express, Morocco, Desire, Angel, Blonde Venus, and A Foreign Affair. In Ean Wood's biography, he mentioned: "not that tall...by this time had attained her adult height of 1.65m" and when applying for US citizenship gave her height as 1.70m and her put her age down as 3 years younger than she was. 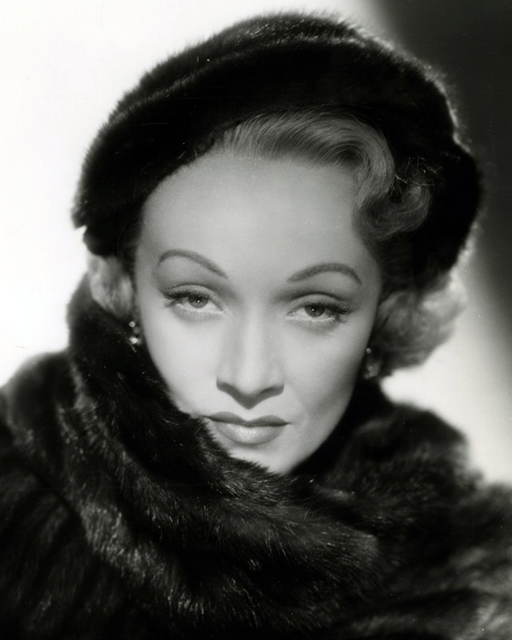 Average Guess (4 Votes)
5ft 5.63in (166.7cm)
Orlando said on 11/Apr/19
According to her non-combatant military ID card she was 5'5": Click Here
Sam said on 3/Apr/15
I guess the impression Gabin could have been anywhere up to 172 cm, I doubt as high as 174 cm though. He definitely deserves a page.
mande2013 said on 1/Apr/15
If Dietrich was 5'4.5 or at best 5'5, then 5'7 for Jean Gabin does actually seem possible. For a while Marlene was listed at 5'6, which made the 5'8.5 listing for Gabin believable, but I discern a 5-7 cm barefoot difference between her and Gabin. I've seen Gabin listed at 174 in some places and at 170 in others.
Sam said on 9/Jan/15
I believe her biography did state she used a box next to Gary Cooper & that they had a little tryst as both did with several co-stars over the years. Have you seen Maximillan Schell's Marlene, Arch?
Arch Stanton said on 26/Nov/14
Must have resorted to box tricks in Morocco, in some scenes she looked quite a bit taller than this next to Gary Cooper. I love her early 30s films, they had such an atmosphere to them.
S said on 22/Nov/14
That picture with "Chaplin" is not Chaplin at all. It's her husband Rudolf Sieber.
Orlando said on 15/Aug/14
According to her ID card she was 5ft 5in: Click Here
Arch Stanton said on 19/Jul/14
Rob can you add a photo and "best remembered for roles in films like The Blue Angel, Destry Rides Again, Witness for the Prosecution, Judgement at Nuremberg, Shanghai Express, Morocco, Desire, Angel, Blonde Venus, and A Foreign Affair.
Arch Stanton said on 17/May/14
Like Bette Davis and Joan Crawford though, beyond 40 she looked rather scary!!
Arch Stanton said on 14/May/14
Generally though, not my type, not exactly what you could call "pretty", and those eyebrows! Something very sultry and attractive about her in films though, she had a great body in her prime.
Arch Stanton said on 12/May/14
Could pass for 5 ft 6 next to Jimmy Stewart in Destry Rides Again. Oh man seeing her soaking wet in a tight dress and angry. So hot!!!
Sam said on 24/Apr/14
Very like Marlene to give her height in heels. She looked scarcely taller than Barbara Stanwyck compared to Gary Cooper. Funny about the pic w/ Chaplin though... those photos show Chaplin's ladies man side, a bit of a gray fox like John Ford called Howard Hawks.
Arch Stanton said on 11/Dec/13
Only a bit shorter than Spencer Tracey in heels in Judgement at Nuremberg.
Marly said on 15/Apr/13
5'3" tops. Check out this photo of her with 5'4" Charlie Chaplin. She looks a little shorter, and it even appears she's standing on slightly higher ground than he is. Click Here
marla singer said on 14/Jan/13
Rob are you sure she's 5 ft 5?
We just saw "Der blaue Engel" at school, where she plays a singer-dancer, so I searched her and was expecting to see 5 ft 2 or 5 ft 3. She looked shorter than everyone in most scenes, yet she had little heels on and at the time she should have been pretty above average in Germany if she was 5 ft 5. Also, I saw she posed with Marilyn Monroe in a few photographs and she looks like 2 inches shorter than Marilyn, though we can't see their footwear

Editor Rob
I don't think she was as small as 5ft 2-3, although 5ft 4 could have been possible.

Josef von Sternberg said on 7/Apr/11
I just saw a documentary about her life ("Marlene Dietrich - The Enemy") where is shown, for a few seconds, her passport, and i guess to have read that her height was 5'2 feet.
patrice said on 16/Apr/09
There's a famous actor in France : jean Gabin (died in 1976), he was between 5'7 and 5'9 I think. There's a picture of him and marlene Dietrich, both with the same military shoes, and Gabin seems really taller than her. I think she was under 5'5.
Mike said on 26/May/07
She looked more 5ft 7 than 5ft 5. In some of the films with john wayne she looked a bit tall for a woman.
Celebrity Heights A-Z
A
B
C
D
E
F
G
H
I
J
K
L
M
N
O
P
Q
R
S
T
U
V
W
X
Y
Z
Random Celebrity
Latest Star Heights