American-born English/Irish actor best remembered for roles in films such as Braveheart, Ice Station Zebra, Escape from Alcatraz, Hell Drivers and Scanners. On TV he starred in The Prisoner and Danger Man. In the Spotlight Directory he was listed as 6ft and 6ft 1, although in an October 1965 magazine he wrote "I'm six foot two myself but, with his bulk of frame and personality, Orson Welles succeeds in impressing his size on all his fellow men.". 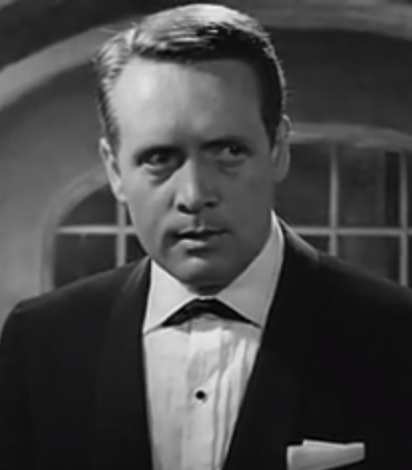 Editor Rob
I could see it at times

Jug said on 10/Jul/17
Regarding Columbo, when you compare how he looked next to Peter Falk with how George Hamilton, who was 6'1, looked, he does seem about an inch taller, so I think he really was the full 6'2. Very handsome man.
Phil said on 5/Jul/17
6 foot 1 for Columbo's villain.
Rory said on 11/Dec/16
Wearing big 1.5 inch style prison boots in escape from Alcatraz he was a good inch shorter than Clint Eastwood in thin footwear. Solid 6'1 but no more.
Flint said on 2/Oct/16
I have Hell Drivers on DVD. There is no scene in which Connery and Mcgoohan can be compared properly. Also both actors stoop in the film. Mcgoohan acts opposite Peter Bowles in an episode of The Prisoner and also Danger Man and looks shorter. Peter Bowles is what a 6'2 person really looks like without the extra inch or two that Hollywood and agent PR ads on. So I think the 6'1 peak listing is good.
Rampage(-_-_-)Clover said on 1/Sep/15
@Shadow2: He edged out a young Sean Connery in a movie called Hell Drivers (1957). I don't understand the downgrade at all. He looked every bit of 6ft2 and then some in his prime.
Shadow2 said on 28/Aug/15
I agree, 6' 1.5" (187cm) for McGoohan would be the best compromise here. In "Ice Station Zebra" he looks 6' 2" compared to 6' 5" Rock Hudson.
Rampage(-_-_-)Clover said on 1/Aug/15
This is way too low.
Steve said on 18/Jun/15
McGoohan was at least three inches shorter than Rock Hudson in Ice Station Zebra.
Shadow2 said on 17/Jun/15
In a 1975 "Columbo" episode McGoohan walks through an amusement park with (then) 6' 1" Leslie Nielsen and seems just slightly taller, at least in the 6' 1.5" to 6' 2" range. Leslie could often appear to measure up well to 6' 2" actors in his earlier drama career, such as with Tim Matheson in an episode of TV's "The Virginian", and with Walter Pidgeon in "Forbidden Planet".
AlexMahone said on 18/Mar/15
Yes, sure he should be downgraded...please look at more carefully...

In the movie "Ice Station Zebra" (1969) comapred to Rock Hudson, he looks legit 188cm. He was the same height as Jim Brown.

Although in the picture at the top of this page he looks very tall Click Here But it has to be said that the man beside him looks quite short.

In this picture Click Here he looks a little more 'regular'. The picture is slanted and not all people are the same distance from the camera, but I think the the men in the grey suits on the left are around his height.

It's hard to pin him down without a benchmark. It's safe to say that he's above average.

Rampage(-_-_-)Clover said on 17/Jul/13
. Possibly nearer 189cm, Rob?
Willy said on 16/Jul/13
I honestly don't know where the comparison with Connery comes from. Their only collaboration was the movie Hell Drivers and there's not a single decent shot in the entire film for comparing Sean's height to Patrick's. If anything, one could compare McGoohan to lead actor Stanley Baker who looked 5'11'' at peak. Two and a half inches between them.
Additionally, Patrick did not look a full eight inches taller than his close friend Peter Falk who had to convict him of murder a total of four times as Columbo. Therefore, I'd estimate McGoohan's peak height as 6'1.5'', and then gradually shrinking in later years.
Pluto said on 29/Jun/13
Taller than a young Sean Connery, totally legit 6'2, if not a bit taller...
Martyr said on 29/Nov/11
I still disagree. Connery always looks shorter to me. Which seems right when you see him next to 192cm Donald Sutherland: Connery looks 187/188cm tops.
Still think Mcgoohan looked 189/190 in hell drivers. Only a half inch question though.
thebad7 said on 3/Nov/11
@Shadow2: Agreed. McGoohan was an easy 6'2". If you can get hold of it, check him out in a 1979 British made-for-TV film titled THE HARD WAY. Patrick plays an ice cold hitman named Connor and he is forced into a cat & mouse game with a shady former employer played by Lee Van Cleef. This film is the definitive "Hitman" film, and both McGoohan and Van Cleef shine--they say little, but they convey so much with their facial expressions and body language. Cool little film and great performances from both actors.

@Martyr: I recently saw a young Connery in HELL DRIVERS. Both he and McGoohan are about the same height: 6'2"+.

Martyr said on 6/Dec/10
At least 6.2, maybe taller (6.3 is not out of the question)...watch him in his younger days. In hell drivers (57), he looked taller than a young sean connery.
Shadow2 said on 18/Nov/10
Patrick was a legit 6'2". In one of the many Columbo's he did with his good friend Peter Falk, he is in a scene walking with 6'1" Leslie Nielsen and he's an inch taller. In 1957's "Hell Drivers" he's the tall villain alongside fellow 6'2" actor Sean Connery (in an early minor role). In "Ice Station Zebra" he's just 3" shorter than 6'5" Rock Hudson. R.I.P. Patrick, you were an original!
Phil said on 6/Jul/09
He looked all of his 6
Patrick said on 24/Mar/09
He was no less than 6'2 and the proof is in Danger Man - "The Outcast" epsiode - while facing Bernard Bresslaw, very known to be a huge man at 6'7 and with very naturally broad shoulders (an almost giant!) he (Pat) turns out to remain tall; just "less tall" by 4 inches tops. The man in question is a monster and Patrick never was dwarfed by him. 6'2; end of the story.
Danimal said on 11/Feb/09
Oh NO...This is sad news for me. I thought he was BRILLIANT in The Prisoner. I've been a fan for 7-8 years now... I can't believe he died. 80 is young for today's standards. Tragic. R.I.P. Patrick.
Patrick said on 11/Feb/09
Thanks for Him Ryan007! He was known for being exactly 189 cm in the early 60ies.
In a fanciful episode (the only real one of the series!) named The Ubiquitous Mr. Lovegrove, the unquestionably 6
Ryan007 said on 10/Feb/09
What a legend!!! Going to be really missed what a voice he had he was amazing in Columbo too! As far as his height is concerned i met him in Wales took an autograph of the legend that was in 2005 I am 6 foot and a half to be precise my father is 6'2 and he seemed exactly the same height as my father he was wearing flat shoes as well...he sure was 6.2 ..but i cant help thinking that he must have been a bit taller during his prime coz i met him few yrs ago in his old age where ppl normally shrink a bit in height so if he was 6'2 few yrs ago when i saw him he surely must hav had an extra inch in his prime
Patrick said on 15/Jan/09
I am set on in paying tribute to one of the most intelligent, fine, subtle man and actor ever, whatever country it
kallis said on 4/Apr/08
He is indeed 6.2 I had the pleasure of meeting him in Cardiff I am 6'1 and he seemed about an inch taller than me!
Ted said on 18/Aug/07
I bought the 'Danger man' dvd series the other day (where he is UN agent John Drake )early 60's. McGoohan doesn't seem to be quite 188 next to the women. i would have thought 186-187
Also in Ice station Zebra he looked tiny compared to Rock Hudson. I was watching it carefully. There was easily 3 inches between them.
snrub said on 7/May/07
He really didn't ook this height in Scanners
Maccahon said on 21/Oct/06
In addition to meeting matthew perry, i have also had the honnor of meeting Patrick McGoohan. I am 6`4, and when i met him, he did seem to be about 2 inches shorter than me. I would say that 6`2 seems right.
Tom said on 27/Jun/06
The best film to see for height comparison is Hell Drivers, made in 1957, way before shrinkage would have occurred. Stanley Baker starred, but the film also featured Herbert Lom, Sid James, William Hartnell (Dr Who), and Alfie Bass, as well as Gordon Jackson, who can be measured against Michael Cane in The Ipcress File and Martin Shaw in The Professionals. However Sean Connery and David McCallum were also in the film, and there's loads of info about their supposed heights. McGoohan would have been about 30, Connery 27, and both looked quite tall relative to the rest of the cast.

Probably the best measure is when he's standing face to face with the tall Peter Bowels in an episode of the Prisoner. Bowels has been in so many British comedy shows and TV dramas that his stature in little doubt.

sam said on 31/May/06
Clint was only 48 in "Escape from Alcatraz", so I doubt he would have lost any height. It's only since the early 1990s he started shrinking - he seemed about 6'3" at the "Unforgiven" premiere, with his cowboy boots on!

[Editor Rob: harvey, if you can avoid any sort of political talk I might let your comments through...I let you read the site of course, but no trolling]

Frank2 said on 19/Mar/06
Clint has shrunk a couple of inches since his youth. And McGoohan didn't look 6'2" when I saw him during the time they were filming Ice Station Zebra at MGM. He looked more like he was slightly over six feet. Next to Rock Hudson he was short. I saw both men standing together outside the sound stage and Hudson was at least three and half to four inches taller. Rock could have been 6'5" like some have said. He admitted to being 6'4" in an interview he did about the time he was starring in McMillan and Wife at Universal. he said that somehow he had lost an inch over the years.
Mike said on 12/Mar/06
In "Escape From Alcatraz" McGoohan stands next to Clint Eastwood who is 6'4" and they look about the same height.
CelebHeights Editor said on 4/Nov/05
He said in an interview he was 6ft 2 in his youth.
Steve said on 15/Aug/05
There is a Columbo episode where McGoohan stands next to Leslie Neilson who is usually referred to as as 6ft. mcGoohan loks a good two inches taller than him so 6ft 2in is probaably his actual height.
Bill said on 15/Aug/05
If you watch "the Prisoner" all the actors wear canvas deck shoes with very thin soles so its a good way to check other actors heights and yes 6-2 is about right perhaps a fraction more but he has always had a very bad stoop.
Celebrity Heights A-Z
A
B
C
D
E
F
G
H
I
J
K
L
M
N
O
P
Q
R
S
T
U
V
W
X
Y
Z
Random Celebrity
Latest Star Heights