Australian actor best remembered for films such as The Time Machine, Giant, The Birds, The V.I.P.s, The Birds, Raintree Country, Fate is the Hunter, Dark of the Sun, Zabriskie Point and Inglorious Basterd. On his main fansite, there's a quote saying: "In 1960, the pressbook for "The Time Machine" described Rod as a 5-foot-11, 175-pounder".

When I arrived at L.A airport, to be met by some Hollywood promoters, they were expecting some six foot, pretty guy. Instead they were shocked to see a five foot ten punk, with a broken nose. 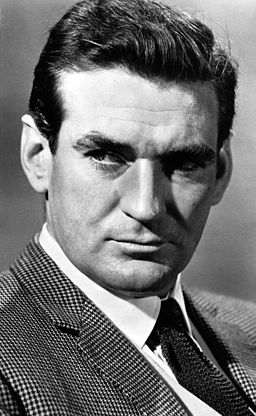 Average Guess (19 Votes)
5ft 9.33in (176.1cm)
Gifford said on 27/Nov/20
According to his official biography, he was actually 5 foot 6 and used to put newspaper in his shoes to make himself taller.
Whatever his height, he was a tremendous actor, a tough guy with the men and a gentleman with the ladies.
Canson said on 19/Jul/20
He appeared in a few episodes of Walker Texas Ranger. He looked slightly taller than Chuck Norris at times then shorter but we all know Norris wears enhanced footwear and that Taylor was much older At the time and out of his prime
Tall Sam said on 15/Jul/20
I think Rod was a good solid 5'10", and probably woke up a bit over it. In some scenes from The Time Machine its striking how much he resembles Robin Williams, or sometimes a cross of Williams & (the loathsome) Mel Gibson; I know Rod was a predecessor of both of those guys.
C?sar said on 18/Dec/19
In Chuka, RD is always shorter than Ernest Borgnine, in every shot. EB is 5.10 in this page. I guess Taylor is 5.9 top
C?sar said on 24/Nov/19
I was watching “Chuka” lately. Ernest Borgnine (177 cm in this page), was taller than R Taylor in every scene.
Girvan said on 18/Jun/19
One of my all time favourite comedies is 'The Glass Bottom Boat' Rod standing next to 5'7" Doris Day looked a good 3 inches taller, I'd say 5'10" was pretty accurate! Rod Taylor, an Aussie, was one of the great Hollywood stars of his era! Second Australian to make it big in Hollywood after Errol Flynn.
James said on 3/Jan/17
Taylor was 5'9". He already looked about a decade older than his age when he was in his mid-thirties.
Arch Stanton said on 9/Nov/16
@Rob, mmm seeing him in slippers with Doris Day in Do Not Disturb I think he looked a 177 gentleman.
Tom said on 27/Jan/16
Rod Taylor was just under 5'9". I never understood why his career went nowhere after "The Birds", unless it was because he began to age fast.
Dave618 said on 30/Mar/15
Sad as well to read of his passing; been a fan for many years. Rob, sorry to hear of your health problem. God bless you, brother.

Taylor admitted in an interview he didn't feel comfortable playing some of the tough guy roles he played because he wasn't that tall, but he was very athletic, and was a boxer in his youth, I believe. RIP Mr. Rod Taylor, an extraordinary human.

Steve said on 23/Jan/15
I was saddened to read about his passing. He was always good in everything he appeared in. I cannot imagine The Time Machine with any other actor in his part.

He did wear lifts in The Time Machine. And in The VIP's. And The Birds.

Robertson wore lifts in The Best Man in order not to look too short next to Henry Fonda.

Sam said on 9/Jan/15
Sorry to hear of his passing and sorry that you didn't get to met him, Rob Taylor.

Rob Paul, could you update his credits "Australian actor best remembered for Giant, Raintree Country, The Time Machine, The V.I.P.s, The Birds, Fate is the Hunter, Dark of the Sun, Zabriskie Point and Inglorious Basterds."

Rob Taylor said on 30/Dec/14
I am dying and if I had one wish it would be to meet my favourite actor of all time. I watched Rod in every film he did from when I was little boy. I AM NOW 58. I just love the guy and his acting.
Sam said on 12/Dec/14
He looked like an exact hybrid of Robin Williams and Mel Gibson! Similar in height and build to the young Gibson as well.
Arch Stanton said on 17/Apr/14
A strong 5'10 is possible, he looked 2-3 inches shorter than Orson Welles in The VIPs.
Dave618 said on 17/Dec/13
Rod is one of my favorite actors. There's something really genuine about his acting. Just watched Cry of the Innocent on youtube and was impressed by his performance. But of course my favorite Taylor performance will always be as Travis McGee in Darker Than Amber.
Get Shorty said on 28/Nov/13
I met Rod Taylor a few times in the 1960s. He was an extremely popular actor. I was five ten and there was no way Rod was taller. I would have put him five nine. He always looked a good height on-screen but in real life he was robust looking and maybe his build made him look only an average height.
Dave618 said on 21/Nov/13
Saw a Youtube video where Rod said he felt insecure back in his heyday because he wasn't tall enough for a lot of the tough guy roles he was starring in. First, 5'9"-5'10" is certainly a decent height. About average, and certainly not short.

Second: how tough you are has nothing to do with height. Tyson was only about 5'10" and he beat the hell out of many a dude who was much bigger than him.

diavolo said on 15/Nov/13
He reportedly wore lifts in The Time Machine. Maybe also in The Birds.
Dave618 said on 4/Oct/13
Joedeckard: Actually Clouse was talking about Rod's co-star in Darker Than Amber, Will Smith. Amber was directed by Clouse. Smith, a tall 6'2" was considered for Dragon but was deemed too tall. Rod called himself 5'10", and I'm taking the man at his word. He looks close to 6'0" in most of his movies, so maybe he had slightly thicker than average heels on his shoes.
jodeckard said on 16/Feb/13
There's no way Rod Taylor was a poxy 5'9" - just watching him in The Birds one can tell he is much taller. And there is this 'He was also reportedly up for the role of Caucasian martial artist Roper in the Bruce Lee vehicle Enter the Dragon (1973). The film was directed by Robert Clouse, who had also directed Taylor in the 1970 film, Darker than Amber. However, Taylor was supposedly deemed too tall for the part, and the role instead went to John Saxon'
little sue said on 4/Aug/12
I used to enjoy reading Frank2's posts. I think he left because a lot used to tell him he was wrong with his heights, especially Micheal Jackson but Frank2 had actually seen and worked with a lot of celebs so always seemed spot on
Dave618 said on 3/Aug/12
Does anybody know why Frank2 doesn't post anymore? He's my favorite poster. He's met an extremely wide range of stars, he tells an entertaing story, and most important of all he tells it like it is. If he says Rod Taylor was about 5'9" barefoot, you can take it to the bank.
Dave618 said on 1/Aug/12
Rod played one of my favorite fictional characters: Travis McGee, who is 6'4" in the series of books by John D. MacDonald. In the books, his best friend is Meyer, a shorter, bearlike man. In the film Darker Than Amber Taylor plays McGee, even though Taylor is 5'9" or so he was absolutely terrific in the role. The funny thing is Theodore Bikel played Meyer, and Bikel is much taller than Rod, 6'1" or so. Hahaha. Rod is awesome. One of my all-time favorite actors of any time period!
bob bertel said on 20/Aug/11
I watched a rerun episode today Aug 20, 2011 of "murder she wrote" and angela lansbury towered over guest Rod Taylor throughout the episode! She is only 5'8" so. . .how tall is Rod Taylor? Maybe 5'7" at most!!!
Brad said on 4/Aug/11
5' 9" at the Ray Courts Show in North Hollywood 10 years ago.
jake said on 3/Aug/11
It seems the general consensus is that he is more 5ft9 range. Frank2 insisted that he was 5' 9" when he met him. Could 176-77 cm be closer Rob
[Editor Rob: would need to look again at him.]
Shadow2 said on 18/Nov/10
Rod was 5'10" in standard shoes, about 5'9.5" barefoot. In 1963's "A Gathering of Eagles", he is swamped by much taller actors. They included 6'5" Rock Hudson, 6'3" Richard Anderson, and Barry Sullivan, Henry Silva and Jim Bannon, all of them 6'2". But Rod was already used to working with much taller colleagues. In his native Australia early in his career, he worked regularly with Australia's then tallest actor "Chips" Rafferty, who was 6'6". Rafferty later worked in Hollywood movies and TV in the 1960's, including "Gunsmoke" where he was one of the few guest actors only marginally shorter than James Arness.
Frank2 said on 28/Feb/06
He wore huge lifts in The Time Machine. I've seen him several times including being on the set for that film and he always looked to be around 5'9" in his stocking feet. Those lifts he wore made him about three inches taller. He's the nicest person imaginable.
CelebHeights Editor said on 11/Feb/06

An Australian visitor mentioned that he said this in 1968:
"When I arrived at L.A airport, to be met by some Hollywood promoters, they were expecting some six foot, pretty guy. Instead they were shocked to see a five foot ten punk, with a broken nose"
Celebrity Heights A-Z
A
B
C
D
E
F
G
H
I
J
K
L
M
N
O
P
Q
R
S
T
U
V
W
X
Y
Z
Random Celebrity
Latest Star Heights