British statesman, who was the Prime Minister of Great Britain from 1940-45 and 1951-55. One biographer described him as "just over five feet six inches tall and walked with a slight stoop", another "he stood just under five feet eight" and also "He was short - five foot six and a half - and physically unimpressive though he had beautiful hands, about which he was rather vain" 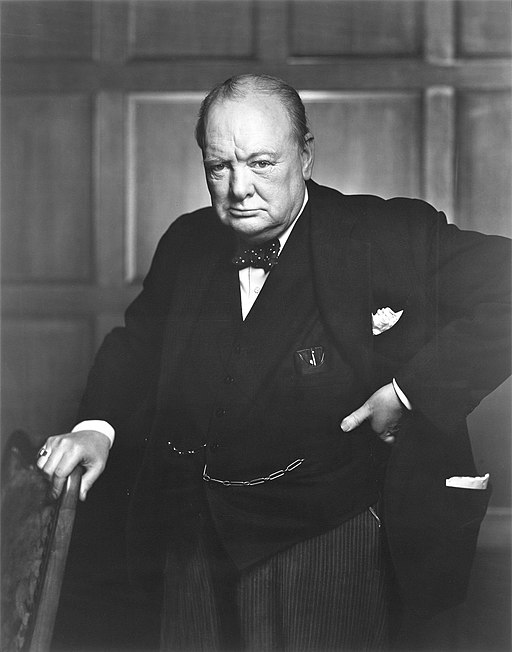 Average Guess (38 Votes)
5ft 6.14in (168cm)
Daniel said on 16/Oct/20
I always thought Churchill as a short stocky man, but 1.69m is quite a decent height for a British guy in his era. By modern standards he was indeed short, but it is because the average heights in the UK have risen about 8-10 cms (3-4 inches) since then.
Sofia Eva said on 1/Oct/20
@Miss Sandy Cowell yes I think that it is for that reason. He was a great personality and I have always associated this with being tall so I was a bit surprised when I discovered that he wasn't tall 😅
Miss Sandy Cowell said on 30/Sep/20
So did I, Sofia, so did I!

He had the unenviable task of being the British Prime Minister during World War Two - and he did a very good job. Hats off to him for that.

However there are two passports who have Churchill listed as being 5ft 9in... : Click Here and Click Here

Next to Harry Truman (who was 5ft 8in in his youth: Click Here ), Churchill looks about the same height or even taller...: Click Here

Truman was a consumate liar about his height, saying the was 5ft 10in (!!!): Click Here and that Churchill and Stalin stood on the step above him to look taller (another lie): Click Here

Editor Rob
I suppose there is an argument for Churchill being almost 5ft 7 in his 30's
Miss Sandy Cowell said on 30/Nov/19
Sir Winston Churchill was born 145 years ago today.

Mark Harrison said on 19/Jun/18
Actually Churchill was never that popular here in the UK. Opinion polls suggest he would have lost an election at any stage during the Second World War, and when he won the General Election in 1951 his party received fewer votes than Labour. Many aspects of Churchill's career are highly controversial, such as his use of chemical weapons in Russia.
Tunman said on 8/May/18
Hmmm,De Gaulle was 192 which was exceptionally tall at that time.He led the free french forces throughout the war and was unofficially the leader of France until liberation although he didn't take political decisions at that time(but he became president in 1958).
Never heard of Hitler being strong and athletic in youth though he certainly was brave when fighting.At 5'8-9 he was very normal in terms of height and for some years was even underweight and constantly hungry.If anything he was perfectly unnoticeable in physical terms.
Most leaders are remembered for the period of their rule which is normal but it would be interesting if we knew more details about their whole lives,it could bring new light on some of their features either concerning their body or behaviour.
@James
Out of curiosity what is your nationality?If you're from Africa,I could understand you despise him for his imperialism,but French,British and Americans like him for he had resisted Hitler.Even Russians and Stalin respected him.But You would agree his character is very complex so it's not exactly that easy to judge him.He poorly managed his task in the economic field,shown bravery in the field,and even when he led war,but nevertheless had some gruesome acts on his conscience (but who didn't at that time?).History judges people.Someone seen as a hero today may be seen as a murderer tomorrow and vice versa.

Ian C. said on 11/Mar/18
Even if Churchill was short, he seemed personally imposing. You don't think of him as a fat guy, for example, even though he was clearly overweight. On the other hand, even though he had been a cavalry officer and had seen action in the Sudan, he didn't really look like a warrior.

Oddly, the only national leader in World War II who was tall and handsome was Roosevelt, even though polio had robbed him of his superior physicality.

Hitler was demonstrably a brave man, and was a lavishly decorated soldier in World War I. He must have been strong and athletic in youth, surely. I have an unfavourable opinion of Hitler because I think that starting an international conflict that killed sixty million people in six years was not a nice thing to do. That moustache looked pretty silly as well.
MAD SAM said on 16/Jan/18
This guy was shorter, more like 5’5” (165 cm)
Jake94 (5'9 said on 15/Jan/18
@David yeah I never got why people act like Hitler was short. 174cm was a very respectable height in Germany at the time, and it wouldn't be much below average even today. Churchill was a little below average at the time in England.
David said on 6/Jan/18
Funny how people talk about Hitler being short when he was above average height at the time and it was actually Churchill who was shorter.
Ian C. said on 28/Dec/17
I thought he was big. When I was growing up here in Canada in the sixties, most adults I knew would have picked Churchill as the greatest man of the Twentieth Century. I'll bet I was over forty before I heard anyone say a disparaging sentence about him. Criticising Churchill was forbidden, just as saying anything flattering about Hitler.
James said on 12/Dec/17
Churchill was probably 5'6" at his peak. I've no idea why Americans praise him considering his role in the sinking of RMS Lusitania.
MJKoP said on 23/Sep/17
A short guy who prided his "beautiful hands"??? He's like the physical opposite of Trump. :P
James said on 21/Jun/17
Churchill's peak height was 5'6.5". It is likely that during World War II he would have been 5'6".
RisingForce said on 24/May/17
So this listing is Churchill's height during WW2 years? If so, then I can't buy Harry Truman as much as 1.5" taller, especially with Churchill's hunch.
James said on 25/Jan/17
Roy Jenkins gave Churchill's height as 5'7" in his biography. Churchill used concentration camps in Africa in the 1950s.
Mr S said on 19/Jan/17
Hi Rob, 5'6.5" looks right in his later years but do you think that in Churchill's younger days, say 20-40s, he could have been 5'7.5-5'8" range? Most of the footage of Churchill is from the 1940s, he was born in 1874 so would have lost height by that point.

Churchill should have been tried for war crimes over the sinking of RMS Lusitania.

Editor Rob: James, remember we have to stick mostly to height, the crimes of Politicians isn't really up for debate...their height is what this site is all about 👍👍👍

Most likely not, because the majority of people outside the US have never heard of him. Rob won't even add Martin Luther King, so what makes you think he will add Malcolm X?
Editor Rob: never assume I won't add somebody, I spent some time the other day looking at Malcolm to see how tall he could look and he will appear 👍

Most likely not, because the majority of people outside the US have never heard of him. Rob won't even add Martin Luther King, so what makes you think he will add Malcolm X?

Editor Rob: never assume I won't add somebody, I spent some time the other day looking at Malcolm to see how tall he could look and he will appear 👍