Francisco Román Alarcón Suárez is a Spanish footballer, who plays for Real Madrid and previously Malaga. At Malaga he was described as "Altura: 176 cmts., Peso: 74kg" 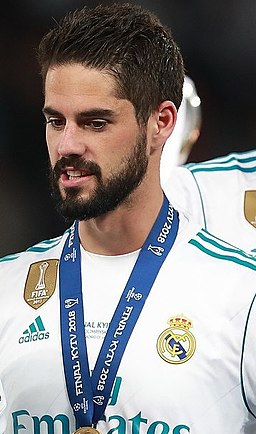 Average Guess (22 Votes)
5ft 8.49in (174cm)
Johnson said on 1/Nov/19
@khaled taban Isco was measured on late afternoon and after flying. Not accurate the hour

khaled taban said on 31/Oct/19
@Rob , How tall is Isco depending on this photo :Click Here , with Jese Rodriguez who is a 176.6cm guy according to this Click Here , this was taken at 1pm ,3 hours after bed.

khaled taban said on 19/Dec/18
Rob, Do you think Isco would edge Marcelo out? Marcelo is listed as 174cm but I think he is a little shorter than that?

5'11 its average in football ? Ahahah

Spain its on of the most shortest countries in Europe

Hunter said on 3/Jul/18
@Goldsmith
The average height in football is 5'11, so he looks short most of the time. However, 5'9 is average height in Spain.
NOTTHATSMALLFORALAOTIAN said on 1/Jul/18
"Goldsmith said on 28/Jun/18
Lol. Isco isn't 5'9" ,he's always the shortest man on the field"