Italian actress known for appearing in films such as Once Upon a Time in the West, 8 1/2, The Pink Panther, Girl with a Suitcase, Rocco and His Brothers, The Professionals, The Leopard and Fitzcarraldo. A 1965 article once described her vital statistics as being: "5 feet 6, 123 pounds, 37.5-24-37.5", although Claudia herself stated in an interview she was "Un metre soixante-neuf", or 169cm and that her Waist was 58cm and Bust/Hips 95cm. 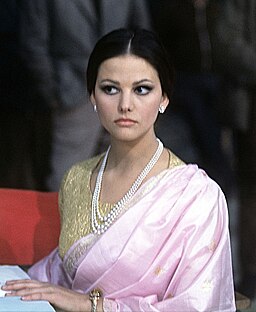 Average Guess (6 Votes)
5ft 6.67in (169.3cm)
Sinclair said on 28/Aug/20
Cardinale could have been as much as a true 5’6” in the 1960s. However, by the time of Son of The Pink Panther, she was clearly shorter than Roberto Benigni, even when she was wearing heels.
glad said on 27/Sep/18
maybe she used to be 40 yrs ago... now she looks shorter than Salma hayek in some pics, definitely shorter than Dakota Fanning; dwarfed by Pamela Anderson... just look for some pics on the net...
Mr. V said on 3/Apr/16
You're welcome. Waist: 58. Bust/Hip: 95 (European measurements).

Editor Rob
yes that pretty much matches the inches value that were being given back in the day.
Arch Stanton said on 3/Apr/16
Rob, would 5'6.25 be better overall? Then we could say she probably got measured at 169 a bit earlier in the day. I agree she can look 5'6 tops next to some but I've see a lot of her films from the 60s and always thought she looked 5'6 and change. A smidge over 5'6 I don't think is that unreasonable..
Arch Stanton said on 3/Apr/16
169 is what I guessed, and what she looks in comparison with most, but Rob is unlikely to upgrade because of how she can look in a couple of comparisons!

Editor Rob
I'm not sure about 169, although it's only 1cm from 168 so you could argue either really.
Mr. V said on 2/Apr/16
If you want to add this at top, she describes herself as 169 cm (Un mètre soixante-neuf) in this interview:

Editor Rob
thanks I will mention it, what other value did she give afterwards? Waist/Hip?

glad said on 7/Nov/15
Of course now she srhrunk a lot... because ofi the age.. just have a look at the pics beside Dakota Fanning: Dakota looks clearly taller, depending on the pic and the angle of view she towers over Claudia...
Sam said on 22/Jun/15
I also thought she was clearly shorter than Jason Robards and even Charles Bronson in Once Upon a Time in the West. This photo of the actors off-screen supports that she's not taller than Rob's listing.
Click Here
Arch Stanton said on 20/Jun/15
Rob can you add Girl with a Suitcase, Rocco and His Brothers and The Professionals?
Arch Stanton said on 17/Jun/15
I think that's the shortest I've seen her look in that photo!! I've seen the Leopard a while back and never thought she looked that short in the film!!
Loren does look about 1.5 inches taller though, and they're about the same age so perhaps it's accurate.
Arch Stanton said on 14/Jun/15
Actually if you look closely at the Lancaster photo I think it might be Claudia on slightly higher ground, but still that's never 7 inches!!
Arch Stanton said on 14/Jun/15
Rob, that's how she looked with Lancaster in the film Click Here
There's a scene in which they walked slowly at gunpoint and I don't think she had on heels either. In fact you can see Click Here she had on slippers which wouldn't give more than Lancaster's cowboy boots. Claudia looked 5 ft 7 range in everything I saw her in, I'm not sure how she got listed as low as 5 ft 6 but she looked markedly taller. Today she does look about 1.5 inches shorter than Sophia Loren though Click Here assuming footwear is similar. Perhaps it's accurate as Loren is a similar age I think, but honestly Claudia could really look 5 '7.5 herself. Do you think perhaps 5'6.5 might be better peak? I'm not sure how she could possibly be 7 inches shorter than Lancaster there, if anything Lancaster looks like he's on slightly higher ground with footwear advantage!

Editor Rob
she was in the leopard with lancaster, I saw a still of her shoe and I think it's a 2-inch type heel Here. Really she looked a good amount shorter than Burt.

Arch Stanton said on 14/Jun/15
Mmm with Burt Lancaster in the Professionals she only looked about 5 inches shorter and I don't think she had much footwear advantage. Looked more 5 ft 7 range with him I thought.
Arch Stanton said on 14/Jun/15
Rob, can you squeeze in The Professionals, Rocco and His Brothers, Cartouche and Escape to Athena?
Brad said on 17/Apr/15
Both Sophia & Claudia were in mediocre films. My grandfather was born in 1877 and I still get carded for beer. He told me his father met Lincoln.
Helga said on 15/Apr/15
Not so huge for that time, I mean My grandfather was born in 1940 & he's 189cm, Gradmother was born 1944 & her height is 177cm NAOW! many male actors was pretty tall
XaBLiK said on 7/Jan/15
Wow... born in Tunisia on 1938... 5'6" for a woman was HUGE in that time and in that country.
Sam said on 12/Dec/14
I would walk across burning coals to be in place of Fonda in that love scene from Once Upon a Time in the West. In bitter irony appropriate for Leone, I believe the first character to get lucky on screen in one of his films is his most loathsome villain (Fonda).
Tania said on 11/Dec/14
@Sam
Yeah, in every picture of Claudia I've seen, she makes Sophia look average, and IMO was more captivating on screen. I guess Sophia became the bigger star because of her Paramount deal, which exposed her to the English-speaking Hollywood audience, and subsequent Oscar glory. Claudia mostly did only Italian and French movies and never seemed to want to play the "Hollywood" game. Still, she got to work with Sergio Leone and Fellini and was adored in Italy - most actresses would kill for a career like hers.
Arch Stanton said on 21/Oct/14
Yeah Loren was in so many mediocre films Sam it's scary!! The last 5 Loren films I've seen were very average...
littlesue said on 9/Oct/14
Thought Claudia was prettier than Sophia, both tall for that era though.
Sam said on 7/Oct/14
BTW, I agree with you, Arch, I liked her better than Sophia Loren, she was a better actress and hotter IMO. Also, Cardinale was actually in at least 5-8 great films, a review of Loren's filmography shows that her best are merely good or interesting and are often heavily powered by star power, she never worked as much with great directors like Cardinale.
Arch Stanton said on 7/Sep/14
Rob can you add a photo and The Leopard and Fitzcarraldo as well?
Arch Stanton said on 27/Sep/13
I mean, take a woman like Jamie Lee Curtis, I think she looks clearly a tall woman, rather than tallish.
Arch Stanton said on 27/Sep/13
There's usually about a 5 inch difference proportionally so I'd say 5'7" for a women is more like 6 ft for a guy and 5'9" for a woman is more like 6'2" for a guy. I'd say a 5 ft 7 lady can start to look tall in good heels and a slim build/long legs.
Rusty said on 19/Sep/13
@connor

Connor 184cm said on 2/Sep/13
Arch i agree 5ft 6-7 could be classed as tallish for a woman but id say 5ft 9 is when tall begins for women i think 5ft 6-7 is average range for women.
Connor 184cm said on 2/Sep/13
@Arch Stanton o_O awww yeah nice pic arch, i know what you mean man :-D
Arch Stanton said on 27/Aug/13
Connor, I mean, imagine rolling around on that carpet with her Click Here It's my idea of heaven!!
little sue said on 25/Aug/13
Nice, wish I had that hip to waist ratio
Arch Stanton said on 25/Aug/13
Very sexy indeed, and a great actress to boot. I preferred her to even Sophia Loren.
Arch Stanton said on 23/Aug/13
They show Henry Fonda's boots at 96 or 97 minutes and they're low cut for boots, give barely an inch I think. I bet Bronson insisted on wearing those massive boots and Fonda having footwear advantage and they warped the angles in their scenes together to make Bronson look only 2-3 inches shorter. I wouldn't be surprised if he insisted on Cardinale wearing low heels in that scene with him either. She could have been 5 ft 7.

Arch Stanton said on 23/Aug/13
Awesome, I really appreciate this one. Two very notable CCs are missing! 5'6" is being very honest I think as she could look tallish for a woman and 5'7 range. She was only a few inches shorter than Niven in Pink Panther but I think she had heels on.
Celebrity Heights A-Z
A
B
C
D
E
F
G
H
I
J
K
L
M
N
O
P
Q
R
S
T
U
V
W
X
Y
Z
Random Celebrity
Latest Star Heights