American actor best remembered for roles in films such as D.O.A., The Wild Bunch, White Heat, The Man Who Shot Liberty Vance, The Barefoot Contessa, Julius Caeser, The Hunchback of Notre Dame, The Bigamist, The Killers and 1984. In the International Almanac 1940 he was described as 5ft 9 tall. 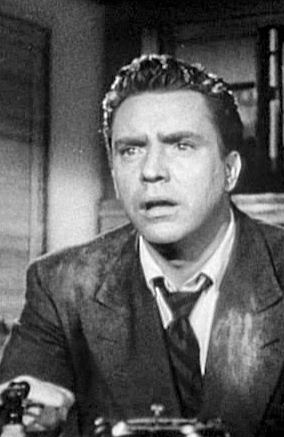 Average Guess (12 Votes)
5ft 8.6in (174.3cm)
James said on 6/Oct/17
In some films he only looked 5'8". It's not surprising he aged badly due to his lifestyle, he had a serious heart attack when he was only about 45.
Marcus said on 4/Jul/15
In his scenes with 5'5" James Cagney in the 1949 classic "White Heat", he appears to only have 3-3.5" on Jimmy. Based solely on this observation, O'Brien would be 5'8.5" tall.
Sam said on 11/Jun/15
He didn't age all too well, as Steve said O'Brien was pudgy, line-faced and slouchy by the 50s (i.e. compare the photo above to his appearance in Hunchback) and was almost unrecognizable, being quite wizen looking in The Man Who Shot Liberty Valance and especially The Wild Bunch despite only being in his 60s, I think I've read he was a hard-drinker/possible alcoholic so that may have contributed.
Steve said on 10/Jun/15
O'Brien was about an inch shorter than 5'11" William Holden in The Turning Point.
modeus said on 9/Jun/15
the big brother thing makes me laugh so hard
Sam said on 9/Jun/15
I agree, 5'9" is a tad low, in some shots in his films he appears similar size to Matt Damon to me...in particular some of his film noir roles he can pass for tallish, broad-shouldered compared to other actors, who in that generation averaged probably 5'7"-5'8". I see O'Brien as 5'9.5" personally at peak.
Steve said on 8/Jun/15
I believe O'Brien was 5'10" in his younger years, then lost a half an inch as he aged and put on a lot of weight. I agree with Gonzola that he was a terrific actor.
Sam said on 8/Jun/15
Speaking of that film, Rob could you add The Hunchback of Notre Dame as well as The Bigamist to his credits?
Sam said on 8/Jun/15
In this photo with Maureen O'Hara and Thomas Mitchell, a young O'Brien looks close to 5'10" range. Mitchell is listed at 5'9.75" and O'Brien seems to edge him out, although Mitchell is also dropping a little and Steve argued that he was not more than 5'9". O'Hara could look a bit below her 5'8" claim a lot.
Click Here
Gonzalo said on 8/Jun/15
I thought he was taller tan that. More around 1`77. Taller tan Bogart in The barefoot contessa.
Excellent actor by the way
Arch Stanton said on 7/Jun/15
Rob, perhaps a 5'9.25 (176 cm) listing might be better, I thought he could look a strong 5'9 at times.
Andrea said on 6/Jun/15
0'0, Rob? I guess this is the shortest celebrity, well the shortest person in the world, probably! :)
Pedro said on 6/Jun/15
You forgot to write his height.