American actor best remembered for roles in films such as The Odd Couple, Barefoot in the Park, Cracking Up, The Front Page, Wheels on Meals, The Way We Were, I Love You Alice B. Toklas, The War Between Men and Women and The Yakuza. On TV he appeared in The Good Guys, Strike Force, The Golden Girls and Big John, Little John. A 1996 NY Daily News described him as a "6-foot-5 actor". 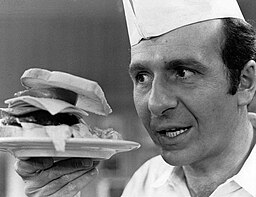 Arch Stanton said on 5/Sep/15
Rob can you squeeze in I Love You Alice B. Toklas, The War Between Men and Women, and The Yakuza?
Arch Stanton said on 5/Sep/15
He doesn't get much screen time in The Odd Couple but there's a scene where he's headed out of the door and briefly you see him with Matthau and he really looks about 4 inches taller. Matthau slouched a lot though and could look easily an inch shorter at time but when stood his best I think he really was between 6'2 and 6'3".
Arch Stanton said on 5/Sep/15
Cheers Rob, this guy was definitely a legit 6'5, he made Matthau look 6'1 range in The Odd Couple! He reminds me of Walter Gotell.
Celebrity Heights A-Z
A
B
C
D
E
F
G
H
I
J
K
L
M
N
O
P
Q
R
S
T
U
V
W
X
Y
Z
Random Celebrity
Latest Star Heights