Canadian-American actor, best remembered for roles in TV series such as Perry Mason and Ironside. In film he appeared in Raw Deal, A Place in the Sun, Crimes of Passion, The Blue Gardenia, Rear Window, Godzilla, King of Monsters and Airplane II. In 1959 he was described by a newspaper as "Tall (six feet two and a half inches), solid (210 pounds)" 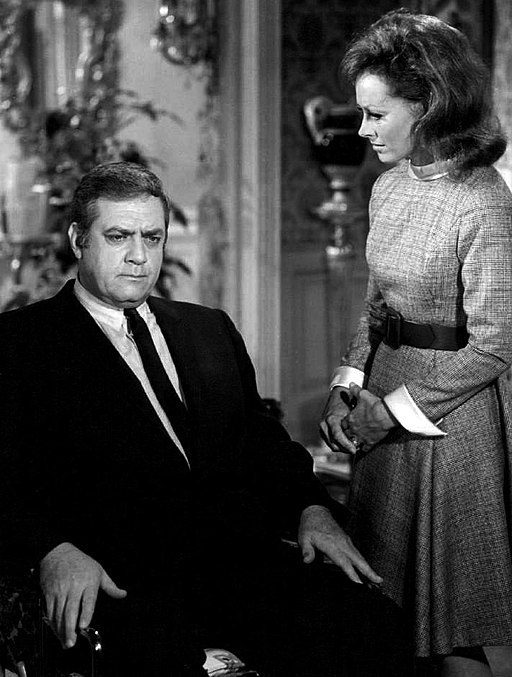 Editor Rob
to me, never seemed to give a 6ft 2 or taller impression, but more often 6ft 1-2 zone.
Rampage(-_-_-)Clover said on 27/Apr/16
Taller than John Candy in this clip from Delirious (his last movie)


Mainly described as 6ft1 and that arrest sheet has him at 6ft2. I reckon he was 6ft1 range in his prime and had lost 2in by Reservoir Dogs.


Rampage(-_-_-)Clover said on 1/Mar/16
Looked 6ft2 in Ironside
Arch Stanton said on 23/Jan/16
Rob, can you squeeze in Crimes of Passion and Please Murder Me?
Arch Stanton said on 23/Jan/16
He can look close to 6'2 in some scenes with big Sterling but generally this does look spot on with him.
Arch Stanton said on 23/Jan/16
Rob, can you squeeze in Crimes of Passion? Good call on 187, he looked exactly this with Sterling Hayden. Not just 6 ft as google thinks.
jessie said on 5/Sep/15
I love Burr as Perry Mason. I'm also a fan of William Dewolfe Hopper who played Drake. Mason looks tall compared to Drake but he also looks wide. Burr's shoulders are huge. I was surprised to find out the Burr was gay and had a life-long lover. Not a bad thing. Just that he didn't seem that way to me.
Chuckie Cheese 2 said on 8/Apr/15
6'1 is believable. He weighed 340 pounds after his days in the Navy in 1946. He slimmed down to the mid or low 200 lb range for his best performance as Perry Mason, but then hit the $2.65 club in Ironside. Great actor!
Sam said on 8/Jan/15
Good to see a picture as well. A great voice on this guy. He was very good as the milquetoast neighbor turned monster in Rear Window, he was actually pretty terrifying in the climax. When I watched it with my brother, he had to leave the room when Burr turns his evil gaze toward Stewart across the courtyard. I'd almost rather have Godzilla coming at me!
Sam said on 5/Jan/15
Rob, could you beef up his credits "American actor best remembered for roles on TV in Perry Mason and Ironside and in films such as Raw Deal, A Place in the Sun, The Blue Gardenia, Rear Window, Godzilla, King of Monsters and Airplane II".
rickie said on 2/Oct/14
Oh, I meant to add that Don Galloway was taller than 6'2".
rickie said on 2/Oct/14
Hollywood bios not only added inches to some celebrities' heights, they also subtracted them as well.

Bill Hopper, Paul Drake on the Mason show, was much taller than the sometimes 6'2" or 6'3" he's often listed as. He's closer to 6'4 or even taller. Thus, you have to adjust Burr's height accordingly if you're going to contrast the heights of the two.

My husband is 6'2" and met Burr in Viet Nam. Says he was either the same height or that Burr could have been a smidgen taller.

Burr looks to be about 6' during the Ironside years and perhaps an inch taller during the Mason years.
sandee said on 25/Oct/07
I used to work in Burbank... a lot of people worked on TV/Movie Sets... I always thought the the old Perry Masons must have been a great place to work... lots of cast members and lots of support staff... still my favorit show
Anonymous said on 10/Aug/07
Stood next to Raymond Burr in 1969, the second year of Ironside. I was (and still am) a 5'6" woman, and I had on 2 inch heels that day. He was easily 6'2" based on how much taller he was than I and based on how tall he seemed to me in comparison to my boyfriend at the time who stood 6' even. Notice in old Mason series he often drops head, appearing shorter sometimes. His broadmess also makes him on tv appear shorter. Bill Hopper, Paul Drake, was at least 6'4". Magazine artilces I had read before I met him stated he ws 6'2" and some said 6"2'1/2. I purposely tried to gauge the accuracy of that when I saw him, and I'd say it is right on. David Odgen Stiers is almost 6'5' I believe, maybe a little shorter.
Roy's Nephew said on 25/Jul/06
Tall bald guy from "MASH" -- David Ogden Stiers? And regarding Burr in the wheelchair -- more than one person who interviewed him on the set reported being amazed at how lightly Burr leapt out of the chair when a scene was finished.
Mr. R said on 6/Jun/06
One last Hopper tidbit: He was the son of gossip columnist Hedda Hopper.
Frank2 said on 6/Jun/06
Bill Hopper was about 6'3". He's the same actor who played Natalie Wood's father in Rebel Without a Cause, the one who refused to kiss her once she became an adult. Father or no father, I'd have had no trouble myself.
Paul said on 6/Jun/06
William Hopper was Burr's sidekick. He was actually at least 2 inches taller. This is quite noticable whenever they're standing close together. I'm guessing Hopper was in the 6'3" range.

Trivia on Hopper: he was the male co-star in Ronald Reagan's first movie (Love is On the Air). He appears to have a couple of inches on Reagan also.

Larry said on 6/Jun/06
They show Perry Mason reruns on a cable channel here. I was noticing that the actor that played Mason's detective (Hopper???) was about 1/2 - 1" taller. Wish I could remember this guy's name???! He has premature gray hair in the series.
Frank2 said on 24/Mar/06
Each time I saw Burr at Universal he looked 6' or slightly over so 6'2" could be dead-on accurate when he was younger. He must have weighed well over 300 lbs when I saw him. I think the reason they wrote his character for Ironside as a paraplegic was to allow Burr to remain seated. Carrying around that much weight is not fun. And it most likely caused him to shrink somewhat over the years.
Editor Rob said on 23/Mar/06

A Man Whose Name was John.

Saw a book which described Burr as "6ft 2", also mentioned that Burr had special shoes made that on the outside appeared normal, but his feet were in fact basically on the ground. Another actor Galloway had his shoes 'built up' so he'd look bigger than the stooping Burr (he was playing the Pope).

Paul said on 15/Mar/06
I wonder if Frank2 has any first hand knowledge of Burr's height? He had lost some height by the 1980s but still looked tallish. I saw a publicity photo of him and Ron Glass on ebay where he was noticably taller than Glass (who's listed at 5'11" on this site).
Mikex said on 2/Jan/06
Apologies Perry Mason not Ironside. I remeber him being dwarfed by one of the guys off Mash in Perry Mason (please ignore last comment ed). The big bald fellow who was sort of replaced Frank Burns.
Paul said on 2/Jan/06
I put this in another thread, but a visual observation by another person made circa 1970 put him around 6'2". From TV he looks perhaps an inch or so shorter, but he also surrounded himself with very tall co-stars which makes comparisons difficult. William Hopper and Richard Anderson (from PM) were both around 6'4" and Burr was not as tall as either. Don Galloway from Ironside was also very tall.

What made Burr seem larger than life was his frame. Even before he gained a lot of weight he was impressively built. TV Land ran an episode of his appearance on the Flip Wilson Show awhile back where he appeared in a sketch with the dimunitive Wilson and Ruth Gordon. He looked like a giant, but that's because the others were puny in comparison.

Mikex said on 2/Jan/06
I've seen Raymond Burr stated as big as 6'5''. Must admit I was sceptical when I watched Ironside.

Editor Rob
I can buy 6ft 2 in Ironside maybe...