Italian actor best remembered as a star in the silent era of Film. He appeared in The Sheik, The Eagle, The Four Horsemen of the Apocalypse and Blood & Sand. In one of the autobiographies about his life the author mentioned how Rudolph claimed to be 5ft 10 or 11 but was likely no more than 5ft 8. On a military paper he had his height listed as 1.75m and on his New York driving license had it down as 5ft 11.5. 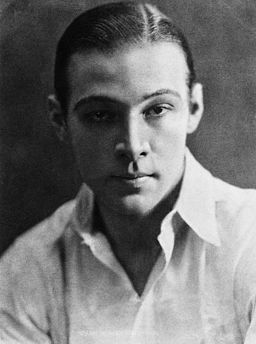 although I doubt anybody could rival Yul in terms of being a bit of a diva...in terms of height, he would be today's Ultimate A$$hole.

here is The license

He had his height down at 1.75 on this sort of a military paper: Click Here

Editor Rob
I'll mention that in conjunction to what he had on his driving license...5ft 11.5!
talker said on 3/Feb/20
Click Here

here is the pic with Barrymore.My guess is 1.75m for Barrymore and 1.77m for Valentino.

talker said on 29/Jan/20
theres a photo of Valentino with John Barrymore,face to face,he looks a little taller than Barrymore.so the listings here are wrong having Valentino shorter than Barrymore.
Nena said on 18/Nov/19
His wife Natacha Rambiva is listed as 5'8" and she was a ballet dancer. And if you look at pics of them she wears at least 1-2" heels with him, he seems about 5'10" at least. And yes he was slim with a small waist like Michael Fassbender.
Martha Milan said on 21/Apr/17
He was so handsome.
Bryan said on 2/Jan/17
I have a suit and film costume owned/worn by Valentino. I would estimate his height at 5'7" - 5'8" at most. His waist was also very small; about 28"- 29", although the pants are high rise.
matt burns said on 25/Dec/16
if you look at him in a movie beyond the rocks with gloria swanson, he looks no taller than 5ft 5 . she was only 4ft 411 inches and he doesn't look that much taller than her
Gx79 said on 4/Oct/16
Rob how much do you think he weighs

Editor Rob: well a typical figure for him during that era was 5ft 11 with a weight of 167 pounds.
charlie said on 8/Mar/16
I just came across a Documentary of Rudolph Valentino Narrated by actor James Mason. I believe Rudolph was 5 foot 5 to 5 foot 6 in height. He had to have been that height. Now he's a YouTube video link stop it at 13:34 Click Here It shows him shaking hands beside 5 foot tall Adolph Zukor. You can clearly see a 5 inch difference in height. My professionalism on the human height says he's 5 and not much shy of 6 inches taller than Adolph Zukor who is 5 feet tall. Now 5 foot 5 is a great height for a male not to short not to tall. Most females are around 5 foot 2 which makes him still taller than most women. Anyways look at that link and tell me if you think Rudolph was 5 foot 5 or 5 foot 6 inches.
5'8" guy said on 5/Nov/15
pictures oh him standing next to Jack Dempsey and he barely reaches 6'1" Dempsey's eye..5'8" is spot on Rob...your always spot on..
Arch Stanton said on 6/Jan/15
Watching The Sheik now and 5 ft 11 is certainly insane!!
Arch Stanton said on 3/Sep/14
Rob did you watch one of his films or something to decide on a flat 5 ft 8?

[Editor Rob: I had time to look at him and thought he looked an average height for that era.]
Sam said on 3/Sep/14
Nice! Thanks! I don't know if he'd cut it as an actor out of his time and place but his stardom was unquestionable.

Never knew he was this short, most listings I've read have tended to be in the 5'10" range that I've read...I'm not surprised about this listing though, he never looked tall.

Arch Stanton said on 3/Sep/14
Watching The Four Horseman of the Apolocalypse now and he's in Cuban heels and yeah I think you might be right on nothing over 5 ft 8.
Arch Stanton said on 3/Sep/14
Much appreciated Rob thanks! Odd seeing him in colour!! Yeah definitely not 5 ft 10 but at times he could look a weak 5'9". I'd probably have guessed him at 5'8.5.
Celebrity Heights A-Z
A
B
C
D
E
F
G
H
I
J
K
L
M
N
O
P
Q
R
S
T
U
V
W
X
Y
Z
Random Celebrity
Latest Star Heights