Scott Carl Rechsteiner is an American professional wrestler who was regularly billed as 6'1" during his career. 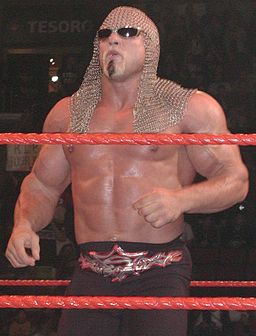 
The Ben said on 29/Jan/20
Stood next to him in 03 in Newcastle England. He was under 6ft then, also not as bulky as I expected.
UndertakerFrank said on 11/Jan/20
A friend of mine son just took a picture with Scott Steiner he is about 5ft 10 to 5ft 10.5 and he had Scott by almost 2 inches !!!! I was pretty shocked i thought Scott was about 5ft 11
Hopping hopper said on 30/Aug/19
Weak 5-11 peak. Now 5-10.
Dago red said on 19/Nov/18
I stood next to him in 05 in a hotel lobby where he was very friendly with the fans. I remember he was surprisingly under his billed 6’1 . He was about 6 even in Hi Tech style tactical boots.
Annonymous said on 16/Oct/18
I remember thinking wow he's not that tall during that true with triple h. I think Rob is spot on here with these estimates. Freaking huge man though, legitimately 245 lbs ripped up at this height in the late 90,s.
Mr.Biggs133 said on 30/Jul/18
Hey rob what would be an out of the bed measurement for a true 5’11

Ben Bell (The Ben) said on 5/Jul/18
Wow
Surprisingly short
I was outsie a hotel in Newcastle in 03 after the Insurexion show and out of all the guys Steiner was the most shocking. Definately under 6ft back in 03.

Jim hoppa said on 5/Jul/18
Yeah utterly BS. Saw him next to Mr T,looked same pretty much. More hyper height BS
MD said on 5/Jul/18
This is quite a bit of height to have lost for his age even given his job, isn't it? I'd have thought he was simply more 5'11" than anything over that at his peak and has thus only lost an inch.
Mayfield said on 4/Jul/18
Nice to see him get a page, spot on with the current. Though do you think the 1/2 mark could be argued for his peak?