American actress, best remembered for roles in films Shadow of a Doubt, The Best Years of Our Lives, Mrs. Miniver, The Little Foxes, Enchantment, Pursued, The Actress, Count the Hours and The Pride of the Yankees. In a 1946 article it mentioned, "Teresa Wright, who stands a little over 5 feet 2 inches". She once mentioned in a 'Saturday Evening Post' "because of a fourteen-inch difference in altitude, I was afraid I couldn't reach his level, period. Gary [Cooper] is six-feet-four; I'm five-feet-two. But by standing on a platform for some scenes, and by standing on my toes during most of the rest of the picture, I managed to get over this particular hurdle." 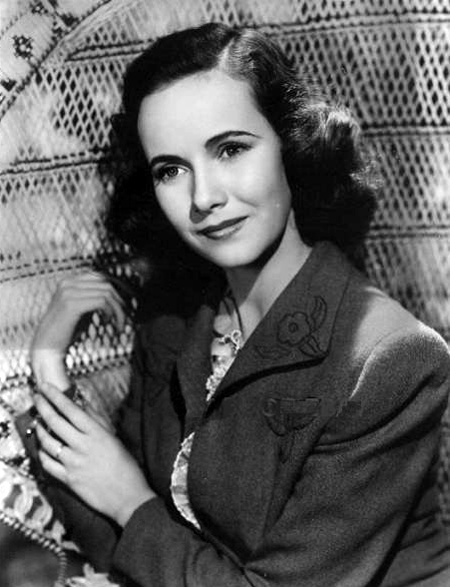 Editor Rob: not impossible, but she did look quite petite really.
Arch Stanton said on 3/Oct/16
Yes, I think that's more likely. And if Mitchum really was the 6 ft flat he claimed bad news for her haha.
Arch Stanton said on 2/Oct/16
Pause at 1:34:18 there's a full body shot of Mitchum and Teresa Wright. You can see footwear there, looks at least 10 inch diff but he might have a bit of ground wear advantage. See what you think but I'm getting 5 ft 1 range more than 5'2.
Arch Stanton said on 2/Oct/16
If you pause at 45:09 I see easily 10 inches. Mitchum could have on cowboy boots though and her a normal heel so say Mitchum at 6'0.5 (I think 6'0.75 myself) but say that, and 6'2 range in boots. I see a tad over a head taller there so might be 10 inch range. Teresa at almost 5 ft 4 in heels, average heels 2-3 inches? I'd guess more 5'1.25-5, I think also in Mrs Miniver Greer Garson could look near 5 inches taller at times.

I'll see a few more films over next few days for some more comparisons.

Arch Stanton said on 2/Oct/16
Photo Rob? and films The Little Foxes, Enchantment, Pursued, The Actress and Count the Hours.

Changed my mind, Rob check out 45 minutes Click Here There she looks a good 10 inches shorter than Mitchum and you'd think some sort of heel. Plus she reckoned Cooper was 14 inches taller, which would add up if she was 5 ft 1 range!

Editor Rob: yeah maybe she was a bit smaller, in some publicity stills they didn't exactly put her On a Box

Arch Stanton said on 26/Feb/14
5'2" range seems about right yeah, looked small in all of those films. Cotten still towers over her in Shadow of a Doubt even when she's in heels.