Ronaldo Luís Nazário de Lima is a retired Brazilian footballer, who amassed 98 caps and 62 goals for his country. He claimed to be 184cm. 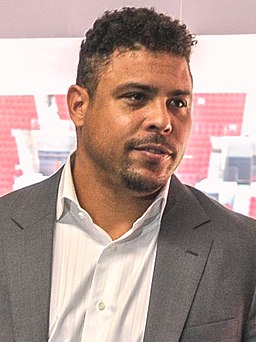 I think his weight gain is at least partly attributable to lifestyle.

Ronaldo played at around 190lbs during the 2002 World Cup. That's on record. He was injured before the World Cup, so his weight was probably somewhat elevated. His listed weight with the Federation of Football Association was 82kg (181lbs) at the time, which was probably his ideal playing weight - light enough to endure the cardiovascular requirements of soccer but strong and powerful enough to be a force to be reckoned with.

If I recall correctly, Ronaldo had numerous injury problems throughout his career. I think that's directly linked to his weight management issues. I mean, when he joined the training camp for Brazil's national team in preparation for the 2006 World Cup, he weighed 209lbs. That's way too heavy for an elite 5'11½ soccer player.

I think it's speaks to the level of talent Ronaldo possessed that he was able to play overweight as he did. He is certainly one of my favorite players of all time.

Chris Junior Hernandez 1990 said on 4/Jul/19
@Joe Joe 0:33-0:36 tells it all its a 6'2 peak Jackman with a 5'11 1/2 Ronaldo. Don't fool by camera shaking or tilt up and down from left to right it can trick people a 2" difference person look the same height.
Tunman said on 2/Jul/19
@Animus
192Lbs could seem too much indeed but at that time it was mainly muscle and the dude was still training seriously.I think some may have a powerful built more easily than others,if you compare him to say Peter Crouch who's 8" taller and only 165Lbs.
I mean both are pro athletes who certainly constantly check their weight (at least in the successful part of their career)and wouldn't allow themselves to gain/lose too much weight
The same could be said about Serena Williams who's 5'9 and easily around 190Lbs when playing.On the opposite side you have Caroline Wozniacki who at the same height claims to be usually 140Lbs.

Valois said on 6/Jun/19
Can easily pass for 6'.
Joe Joe said on 30/Apr/19
here he is with Hugh Jackman near the end of his Career playing in Brazil. There doesn't seem a massive difference between them. Obviously we can't see footwear or the ground. Ronaldo is a funny one. He can sometimes look 180cm then look 184 cm.

He made Adriana Lima in heels look pretty smaller than him.

Dude 173 cm said on 14/Dec/17
"El Gordo"
eduardo said on 6/Dec/17
theres like 2-3 inches difference when ronaldo and cristiano stand next to each other
ggangsta said on 3/Dec/17
Phenomeno is taller than that. I'd go with 6 ft for him.
James said on 3/Dec/17
@alana If I'm not mistaken, Rob list celebrities at their lowest (evening), not their peak (morning). Maybe not the absolute lowest, but Rob gives an estimation near the lowest.

Editor Rob: the difference between 2pm and 10pm on average is small, like a couple of mm's, so giving a height at that time is reasonable. I'm thinking of height after being up 5-6 hours at least.

Editor Rob: I'm sticking with right between the 2, but I think you could make a case for a full 182 at times.

they look exactly the same, Ronaldo even has more footwear

Each time you send a pic angle is useless James

Johnson said on 30/Apr/17
@Johnny no my friend, I support my estimations with pictures and medical data. hijopotamus met Ronaldo. He is 183 my friend
James said on 30/Apr/17
Perfect!! Thanks so much for the addition Rob. I have guessed him sometimes as 1.81 but maybe I was too radical. 1.82 seems to be spot on. I think Johnson and I will agree 1.82 is perfect for Ronnie. Come on Johnson I know we will agree on this one. Ronaldo is slightly under 1.83.
dasdasdas said on 30/Apr/17
Ronaldo is an awesome guy regardless of height... easily one of the best football players ever.
Johnny said on 30/Apr/17
Borats Chicken said on 29/Apr/17
OH ROB THANK YOU I LOVE YOU SO MUCH I WANNA GIVE YOU A BIG HUG AND I WANNA MARRY THANK YOU I LOVE YOU SOO MUCH!!!!!!!
Editor Rob: I think Ronaldo is a trickier guy, I've seen him look all from 5ft 11 to 6ft range at times!

I have to agree he is a big name and Rob took a long time to add him. He was definitely more deserving of a page than a guy like N'golo Kante. One of the best footballers ever!

Rob, I dont think he needs an upgrade even look at this picture with him and zinedine and beckham

More than 45% of the people in Brazil are of European descent so 5ft 11.5 is not that tall.

Editor Rob: this guy can be tricky, hence why I had to have a longer look. I'm interested in what the user average guess for him would be.

Comparing with Jackman is always tricky as that guy can seem 6ft 1 at times ;)