American actor best remembered for roles in films such as Pat & Mike, We're No Angels, The Green Berets, Men in War, Battle Cry, The Marrying Kind and Miss Sadie Thompson. A 1952 publication described him as a "husky, six-foot actor" and another article mentioned "Ray is a blond, six-foot, 195-pound[er]". 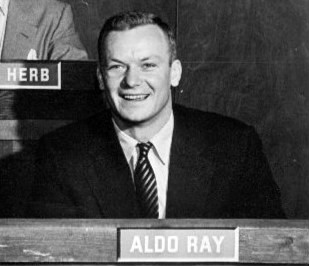 Average Guess (3 Votes)
5ft 11.33in (181.2cm)
James said on 5/Feb/17
I think he was just a fraction under six foot. He did not like John Wayne, which probably damaged his career.
Sabbath Black said on 5/Nov/16
1.82-1.83m looks about right to me. Very burly and powerful-looking for his era, too. Today everyone understands nutrition and excercize and its fairly "easy" to get jacked if you have the time and inclination but Aldo Ray looked like a 21st century athlete way back in the fifties. And if anything that square build probably took a couple cm off of his height, from a visual perspective.
Tom said on 13/Jan/16
His weight ballooned due to his chronic alcoholism.
Arch Stanton said on 26/Dec/15
He could look 205-210 pounds in some films actually.