English actor (and cricketer) best remembered for roles in films such as The Prisoner of Zenda, The Four Feathers, Morning Glory, Tarzan the Ape Man, Rebecca, Little Women, Kidnapped and Cleopatra. In a late 1930's film bible he was described as standing 6ft 2 inches tall and weighing 184 pounds. 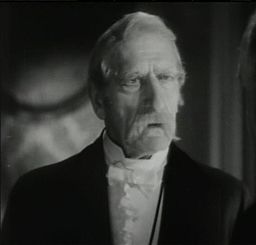 Looking a clear 2in taller than the 6ft3 Henry Wilcoxon...


Described as high as 6ft4 in his cricket playing days. Could he have been that tall?

Rampage(-_-_-)Clover said on 30/Mar/16
Well, you'd be hard pressed to find anything of him in his younger years as he came into acting at quite a late point in his life. I think the 6ft2 listings correlate more with that. May have rounded down in order to avoid losing jobs, being tall was hindrance. Honestly he looked 6ft3 in his 70s which would probably imply 6ft4 peak which is what he was described at during his cricket career.
Rampage(-_-_-)Clover said on 16/Mar/16
Rob, then howabout between those claims?


Looked a big 190cm guy in his 70's. Which makes me wonder how tall he could have been in his 20's-30's. I definitely would not dispute 6ft3. Could even have been more than that.

Editor Rob: I need to see him in some more movies first.

This was his very last movie (he died just a few months after filming it and before it was released) and proportionally he looks like he was easily a few inches taller than Peter Lawford.

Rampage(-_-_-)Clover said on 1/Dec/14
Looked no shorter than Sanders who many considered to be a legit 6ft3.
Arch Stanton said on 25/Nov/14
Better anyway. I just had a look at MOrning Glory again and he didn't look quite as tall as I'd thought. 189cm for that era was OK anyway but I think he might have been a proper 6'3" in his prime and measured 6'4" in cricket shoes or something.
Sam said on 25/Nov/14
Pretty sure he could smother someone with his beard in that picture. Yeah, he could have definuitely been 6'3" as a young man but this is at least a reasonable compromise.
Rampage(-_-_-)Clover said on 24/Nov/14
I'd go as high as 6ft3 for this guy but 189cm is fair also.

He was a big dude. Scary looking aswell especially if you watch any of his movies in technicolor

[Editor Rob: it's probably fair.]
Arch Stanton said on 21/Nov/14
Rib is there any chance you can upgrade him then? He could look a strong 6'2" even in his 70s, I think as a young man he'd have hit 6'3". Also I think he looked similar to George Sanders in Rebecca in that photo, I need to see it again at some point though to confirm.
Rampage(-_-_-)Clover said on 20/Nov/14
Here he is edging out a young Errol Flynn
Click Here

Rob, what do you think?

[Editor Rob: I had another look at some footage and it is possible like someone like Cooper the 6ft 2 could have been underplaying and he was more in 6ft 3 range earlier...here with Fairbanks and Basil]

Rob, also can you add some more cricketers. Atleast warnie and Sachin Tendulkar. Sachin is listed as either 5'4 or 5'5 but his claim is a generous 5'6.

“ How can anyone look up to me as I am only 5 feet 6 inches”.
Reference: Click Here

There are a lot of South Asians, Brits and Australians on this site, so adding him will be great.

Gonzalo said on 12/Nov/14
Smith always looked very tall in films, even though he was very old in all of them. He could have been around 1,90.

Colman was a great actor with a bunch of excellent movies. He looked around 1`78
Rampage(-_-_-)Clover said on 11/Nov/14
Actually, I just saw Beyond Tomorrow (1940) and he looks huge...he reminds me a lot of Vincent Price for some reason
Rampage(-_-_-)Clover said on 11/Nov/14
Around 6ft2-6ft3 next to Niven and he would have been in his 70s by that point!
Arch Stanton said on 11/Nov/14
Can't find A Double Life anywhere online Sam, I'll be getting the DVD I think. It's the only best actor winner I've not seen. Oddly for an Oscar winner it's not easy to find, but nor are some of the earlier Best Actress winners, can't find films like Coquette, Min and Bill or The Sin of Madelon Claudet even on DVD!
Sam said on 11/Nov/14
Yeah, it's possible he could have been more than 6'2" when younger, maybe near 6'3", I don't see the full 6'4" though I think.

...Speaking of The Prisoner of Zelda, Ronald Colman doesn't have a page...he was one of the major leading men in the 30s and 40s but is a bit forgotten today.

Arch Stanton said on 10/Nov/14
The thing is though this guy was born in like 1863!! If he was still mostly looking at least this well into his 70s, it is possible he was taller in his prime?
Sam said on 10/Nov/14
I think this had to be right based on Tarzan the Ape Man...I thought he looked similar to Johnny Weismuller and then towards the end when attacked by a massive ape, the guy in the suit totally dwarfs him.
Arch Stanton said on 10/Nov/14
There's a good comparison with Niven at 3:25 Click Here He's not looking over 6'2 but Niven does look taller than 181 and nearer 6 ft. Niven's height fluctuates a lot though and can surely only be attributed to lifts. Just when you think he's an easy 6 ft he'll look barely 5 ft 11 in something else. He can look anything from 179-186 at times. I think generally 181 for Niven and footwear explains it. We've seen his lowest in a few films and it's difficult to buy 6 ft for him without the shoes. Perhaps a flat 6'2" for Smith is accurate but to me he often seemed to have a presence and look of a 6'3' er. In fact he looked near 6'4" than 6'2 next to Katherine in Morning Glory! Well. I think it's clear he wasn't that, but I still think generally anything from 6'2-6'3" is arguable.
Arch Stanton said on 10/Nov/14
Mmm at 6:15 he looks a similar height to David Niven!! Click Here Niven must have been in his "I'm 6'1" boots" he wore in films like 55 Days at Peking whenever he knew he was appearing opposite a taller actor! It's difficult to see over 6'2" next to Niven put it that way though.
Arch Stanton said on 10/Nov/14
With 5'10 listed Ronald Coleman at 0:06 Click Here Not sure on Coleman but I think that looks near 5 inches, deducting Coleman's hair.
Arch Stanton said on 10/Nov/14
Click Here

Ah I remember him in Rebecca now. He's looking very similar to legit 6'3" George Sanders there.

Arch Stanton said on 10/Nov/14
Click Here With 5'8.5" listed Cyril Maude who is nearer the camera than him. He looks taller than 6'2" flat to me. I'm due to watch the original Prisoner of Zenda, I'll see how he looked next to Douglas Fairbanks Jr.
Arch Stanton said on 10/Nov/14
Nice one Rob, can you add Morning Glory as well? Katherine Hepburn's first Oscar winner. I guess you'd be familiar with him in quite a few films. Are you sure on only 6'2" though?? I thought he seemed very tall range at times. With David Niven Click Here and he was old age by then.

[Editor Rob: that was the height/weight basically coming from publicist/agency during that era. Maybe he was a legit 6ft 2 and could look taller against some who may have not been quite what they claimed.]
Celebrity Heights A-Z
A
B
C
D
E
F
G
H
I
J
K
L
M
N
O
P
Q
R
S
T
U
V
W
X
Y
Z
Random Celebrity
Latest Star Heights