Canadian Actor best remembered for his role as Montgomery "Scotty" Scott on TV series Star Trek and it's subsequent films. 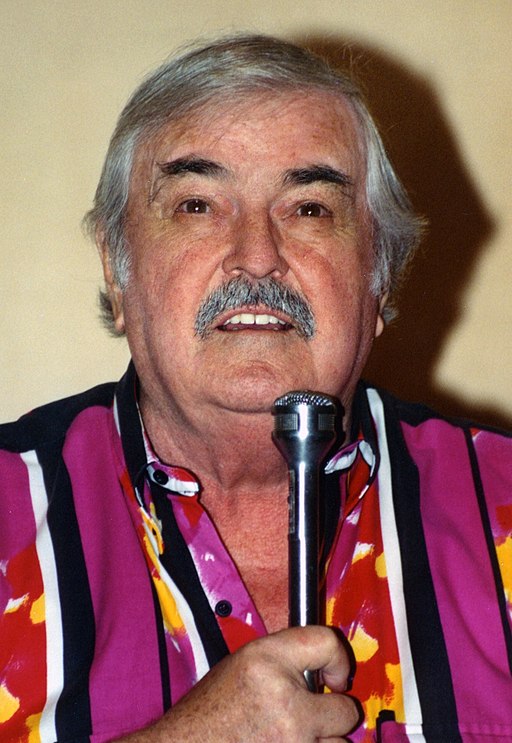 [Editor Rob: yes I think somewhere in that range.]
lol said on 6/Jun/13
As we can see in Guns N' Roses's pics , Duff is the highest one , but the other guys are pretty much the same height . Izzy was a bit taller than Axl and Slash , and Steven Adler was the shortest one . So , Izzy might be a STRONG 5ft9 , or maybe a weak 5ft 10 at the very most .
the AMAZING Babushka said on 28/Sep/11
may be 5'11". guns was nothing without him, and since he wrote most of the songs it was best they didnt release any original material after he left. VERY talented song writer
shortbaldloser said on 21/Jun/11
I wonder if he seemed an inch shorter than Shatner in Star Trek because Doohan didn't wear lifts. Because he did seem shorter.
guyfrommars said on 21/Mar/11
Here's Doohan in 1969 next to 5'10.5" DeForest Kelley:
Click Here
Click Here

Anonymous said on 6/Mar/09
Looks 5-9 in the pic unless Glenn is wearin high heel shoes.
jacques said on 12/Jun/08
hey glenn, when did u give up that kinda image? with your long silky rocker hair?
tank top and stuff

if you ask me, you weren't such a bad looking guy
AshnarLynx said on 24/Dec/07
Jeffrey Dean Isbell.;) Cool guy. And talented.
glenn said on 29/Aug/07
this was 1992 at a hotel in new york city.he very rarely comes here.
raisa said on 28/Aug/07
I've always thought Izzy was that tall, nice to comfirm it. Where did you meet him glenn?

Brad said on 6/Mar/07
They'll all do it again after seeing the numbers The Police put on the board. Too bad Axl has a chemical balance problem in his noggin'. Last thing I want to see is them on package tour with Warrant, Quiet Riot, Cinderella, etc. in the future. Axl probably put on the Illusion volumes and threw the latest LP masters in the trash.
glenn said on 6/Mar/07
heard he was financially stable though.and he is playing a very small parts on the new cd.just recorded in january.
Lmeister said on 6/Mar/07
He had a major role as a songwriter in G'n'R. Slash has written a lot of kick ass solos, but Izzy wrote some of the best tunes of the 80s-90s...
Brad said on 6/Mar/07
Probably signed a screw contract with Geffen on the publishing when they walked in for the record deal. David Geffen had brilliant contract guys.
glenn said on 5/Mar/07
wrote at least 40 percent of appetite.at least.
Brad said on 5/Mar/07
Far more talented than given credit for.
Anonymous said on 13/Feb/07
Ok cool. I hope to meet those guys one day. 2 of my favorite players.
Glenn said on 13/Feb/07
I dont know about soon,but actually I might be able to do it next week.
Anonymous said on 13/Feb/07
Yngwie is 6 foot 4...I'm 5'7 1/2 and Yngwie was about a head taller than me. Also Glenn can you post the pictures of you with George Lynch and Warren DeMartini soon?
jason said on 1/Feb/07
yeah 180 is right, guns n roses yeah, best band ever
Glenn said on 5/Jan/07
Sorry,some posts I didnt notice.he never wears boots.at least not from 1991 on.he had those fave of his,shoe-sandel combo.
Yeah said on 4/Jan/07
Whatever his Height is, he is the best anyway.
Anonymous said on 4/Jan/07
cool izzy interview here Click Here
Danny said on 20/Dec/06
I'm curious where you will put Yngwie at..
gn'r said on 9/Dec/06
Freakin' awesome. Izzy is great. Thanks for the pic Glenn. Was Izzy wearing the cowboy boots in this pic?
Glenn said on 29/Nov/06
Yngwie does wear heels.but he told me 6-3,and did look it.one pic,he must be bending his knees with me,in the gutter,Im guessing.
Glenn said on 29/Nov/06
Major songwriter and guitar player to Appetite For Destruction.great guy.

[Editor Rob: what about this Yngwie guitarist Glenn? Before I add him to the site I see that it was mentioned on another page he has said both 1.83m and then you said he says 6ft 3 to you. Does he wear 2-inch heels out and about the place?]