American actress best known for films like The Girl Can't Help It and Too Hot To Handle. In Playboy, she listed her height as 5'5.5" and measurements as 40-21-32, although in later years she was officially measured 40-21-35½. 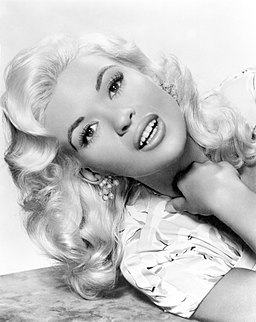 Sandy Cowell said on 21/Dec/18
There was a white-blonde, curly-haired little girl in my class when I was 4-7 years old called Jayne Mansfield - honest!

Jayne's tragic death in 1967 in a freak car accident was hardly the sort of thing to have been talked about back then in a classful of tiny 6-year-olds. I only found out much later. Poor woman, she was reputed to be very intelligent and loved kids and dogs. I believe Jayne's husband was around 6ft7 or so. I would put Ms Mansfield at nearer 5ft6, so 5ft5.75 it will be!

Rojina said on 22/Jan/18
I used to think she was 5"9....
Anonymous said on 22/Dec/17
I find it very strange how Jayne is commonly listed as having been 5’5.5-5’6 when her autopsy report stated she was 5’8. They would have presumably measured her height accurately for such a report although she looked quite average to me, certainly not above 5’7. Do you think 5’8 sounds reasonable Rob?

Editor Rob: it could be a case of an autopsy mistake. I'm sure there is enough out there to think 5ft 8 would be impossible - in heels she would have been 3 inches taller than a guy like Frank Sinatra, yet doesn't seem much taller in heels.
Sheila said on 14/Dec/17
She claimed to be 5’5 1/2, but it’s a known fact that it probably wasn’t true. Her death certificate states 5’8 which is pretty tall for the time and it wasn’t necessarily considered attractive for a starlet. Feminine beauty ideals were different from nowadays.
5’8 seems accurate.
roberto kastelan said on 4/Aug/17
Jayne mansfield media 1.75 mts....No 1.66 mts
Scarlett Rose said on 23/May/17
If Jayne Mansfield was 1.66m tall, Marilyn Monroe could not have been! So much for me being unbelievable or daft! 😝😁😊

What was that you said Editor Rob? Can I believe my eyes? 👀👀 Did you really say..."Editor Rob: Jayne could give a taller impression in photos I noticed. She seems taller than someone like Marilyn."

Someone is not being honest. 😕 Could it be possible that Marilyn lied about her true height/assets?

Editor Rob: of course she could have lied, but by 3.5 inches? I can't see it...the lowest I'd ever guess would be 5ft 4 range for Marilyn.

Scarlett Rose said on 23/May/17
Message to Editor Rob: Strange that you have given Mansfield the same height as Monroe, when Mansfield was taller than James Haspiel and Monroe was smaller. See links to pictures on Monroe's page. I have always thought Mansfield was visibly taller than Monroe. Seems you give all buxom blondes and sex symbols of the silver screen the same height. Talk about stereotyping! 😝😁😊 hahaha. LOL!
anyonmious said on 23/Dec/16
I seen listing as low as 5'2" for jayne mansfield
Arch Stanton said on 22/Dec/16
Rob, if there any photo which perhaps erm, shows a little more of her off? With a body like that you can't just have the face LOL.

Editor Rob: Jayne could give a taller impression in photos I noticed. She seems taller than someone like Marilyn.
Josh jeffords said on 11/Oct/16
Wow still beauty to measure by looks more like a 10 than 5 5.
jasperwazup said on 24/Sep/13
she's been listed at 5'4''-5'4.5'' elsewhere
Arch Stanton said on 10/Jun/13
Watching Too Hot to Handle. She's bent over the chair in the bar, what a body! I can see why she was a Playboy pinup in the 50s and 60s. Looks upper average to me, 5'5.5-5'6" seems about right but my eyes are not exactly fixated on her height, there are other assets if you know what i mean...
Fiona R. said on 23/May/08
I met Laila Ali on American Gladiators and she indeed stands 5'10" I stood next to her and we both stood the same size, I myself am 5'10"
Daniel said on 2/Apr/08
dmeyer, I totally agree with you. I understand why you're smiling, Glenn, lucky man, ha ha
Brah said on 22/Feb/08
dmeyer this is Muhammad Ali's daughter. She is also a boxer
dmeyer said on 21/Feb/08
i dont know who she is but she is hot
Kendra said on 26/Jan/08
well Liz, you got me on weight but I tower you on height! 6'3" 170 lbs. here
glenn said on 11/Jan/08
are all tall women big boned elizabeth? forgive my ignorance.
Elizabeth Davis said on 9/Jan/08
her dad and I are both from Kentucky, interesting
Elizabeth Davis said on 9/Jan/08
finally a woman who's tall and big boned! I can relate, I am 6'0" 180 lbs. Laila Ali looks about 5'10.5" after having seen American Gladiators.
Anonymous said on 5/Jan/08
def high heels on in the pic though cause thats not a 2 intch diffrance.
Anonymous said on 3/Dec/07
Big woman. With her good looks she shouldn't be boxing though.
glenn said on 20/Nov/07
thanks helene.yes,heels.small heels i think.
Dawn said on 18/Nov/07
Ayman, you think she looks a bit masculine? Buddy, check your swing...
H said on 17/Nov/07
Glenn, This is definitely one of your best photographs. Is Leila wearing heels?
Bob H. said on 17/Nov/07
Absolutely beautiful and very fine woman. Her father must be ver proud. Can easily see her segwaying to movies or TV.
yeppers said on 17/Nov/07
that's a great shot. Wow she's nice.
Big T said on 13/Nov/07
She is listed 5'10" so I doubt she'd be any taller than that, and she only fights at 165-170lbs. She probably walks around closer to 180lbs though.
jim said on 5/Nov/07
yea shes 5'10 she got her height from her father who was a solid 6'3
Anonymous said on 29/Oct/07
Wow, great pic, she is a real stunner. Laila Ali is listed at 5'10" & 180lbs, a really powerful girl.
Anonymous said on 28/Oct/07
She looks more than 5'10 in the picture, it looks like she looks about 5'11.5 or 6 ft in the picture but I guess shes wearing high heels.
brother_h said on 27/Oct/07
i say she looks 5'10
sweetchari said on 26/Oct/07
She looks 6ft in the pic but I guess wearing heels will do that, very pretty woman
Dan said on 26/Oct/07
"Kevin Durant says on 25/Oct/07
She looks very beautiful in this picture, and Leila Ali is one of the greatest female boxer of all time just like his dad Muhammad Ali."