English Actor, best remembered for playing the Third incarnation of The Doctor in BBC series Doctor Who. from 1970-74. He also starred as the titular character in the TV series Worzel Gummidge. His son Sean Pertwee said in The Express, "He was a lot more insecure than anyone would believe of a 6ft 3in guy", although Jon listed himself as Height 6 feet 2½ inches 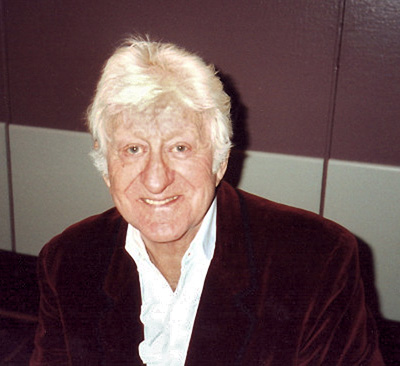 Sandy Cowell said on 1/Jan/19
Oh, didn't Jon follow Patrick Troughton? Yes, I think that was the order of things!

I used to get SO upset when they changed the Doctor Who players when I was a child because I grew so fond of them. The one I took to the most rapidly was Tom Baker, because he was such a comical fellow, with a trademark long scarf and an ever-ready bag of jellybabies!

I learnt something today though via Katy Manning's page, and that is how very tall Jon was!

As he's, alas, no longer with us, I will give Jon what I reckon to be his peak height of 6ft3.


He looked nearer 6ft3 in Doctor Who for sure. Later on he may have been this mark though

Editor Rob
I watched a lot of Pertwee and didn't really think he looked over 6ft 2 the more episodes I watched.

Chaz said on 28/Nov/13
I met him in 1986,at the BBC studios,at lime Grove,I stand right next to him in the Canteen,and was shocked how tall he was,a good 6'2''+ must of been 6'3'' as a young man.
tom said on 15/Sep/12
Met him in oldham england few years before he passed,looked a tiny bit shorter than me {6' 2.5"} but he was in his 70's i think so its to be expected.
Anonymous said on 6/Jul/09
I met Jon Pertwee at a SciFi convention or something similar (I only attended it to meet him and get his autograph) in the early 80s (I believe). I think it was in Alabama somewhere. I lived in Atlanta at the time. I asked him how tall he was and he immediately straightened up and seemed to really enjoy the question. I'm pretty sure he said he was originally six foot four and a half, but he had had a back operation and lost a bit of his height from the operation. I don't remember how many inches he lost, but he looked very tall, even while he was sitting. He was a very nice and friendly man, who seemed to be very happy with life.
Barry Langcaster said on 24/Jun/09
I can still remember when I first seen Jon Pertwee as the doctor,I instantly liked the ol chap, at times I would have to admit that the budget on the show seemed a bit low in the 70s but there was just something about the atmosphere of the show the music and Pertwee. I always could tell he was indeed a big egg and toast guy easily 6'3 on doctor who, maybe even 6'3.25 in his prime.
GUK said on 13/May/09
I have a pic of him with my 5ft 10.5 brother somewhere def at least 6ft 2 in his 70s
Raymond Delauney said on 21/Mar/09
Yes agreed, the best Dr Who. Maybe I'm biased as he was my first Dr Who. I don't think height really that important for playing Dr Who, maybe extra gravitas? Tom Baker who succeeded him was perhaps taller but I preferred Pertwee. Invasion of the Sea Monsters (when
Tobacanist Richard said on 11/Feb/09
From watching Dr who for many years I could tell you this old chap was a big eggs and toast sized guy, so I would agree to the 6'3 listing here ,I myself estimated his height within the 6'2 to 6'3 range. Marvelous actor and the best Doctor in my opinion.
Middle-sized Cat said on 26/Oct/06
Worzel Gummidge - best TV comedy of the lot! Jon Pertwee was perfect for the lead scarecrow role. Went to the area it was filmed in - just beautiful (Hampshire, UK).
Anonymous said on 14/Feb/06
looked it next to the people round him. theres a publicity still of him and patrick troughton(who looks to be about 5'7"/5'8" although im not sure) from doctor who: the three doctors and he towers over him
Celebrity Heights A-Z
A
B
C
D
E
F
G
H
I
J
K
L
M
N
O
P
Q
R
S
T
U
V
W
X
Y
Z
Random Celebrity
Latest Star Heights