American Actress best remembered for films such as The Wizard of Oz, Easter Parade, A Star is Born, Meet Me in St Louis, Judgement at Nuremberg, Love Finds Andy Hardy, Babes in Arms, Ziegfeld Girl and A Child Is Waiting. In 1967 she said in an interview she was "only 4 feet 11". 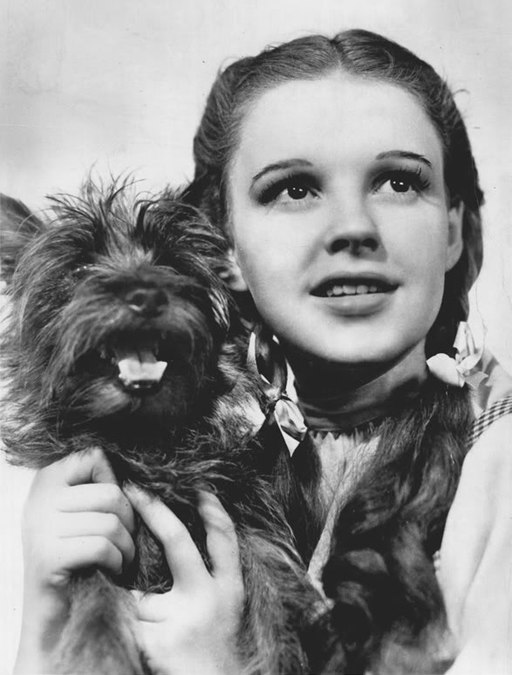 Editor Rob
She could have lost a bit of height, though a fraction maybe.
Miss Sandy Cowell said on 10/Jun/20
The magical Judy Garland was born 98 years ago today. She lived to just 47, tragically passing away from a barbiturate overdose shortly after her birthday.

She had 3 children, including Liza Minnelli and Lorna Luft.

rosa said on 16/Jan/20
She might have been 5'0 when younger but 4'11 at 45 seems more than accurate.
The 5'3 claim, not accurate to me.
Michael 5'10", 178 cm said on 16/Dec/18
This is a strange listing, I see her listed as 4'11" everywhere and that's the height she claimed so I don't think she's taller than that unless she had grown. Judy was either 4'11" or 5'0", obviously a very short girl. Most short girls don't downgrade themselves and hate being short, so I thought she was being honest at least at the time. But anyway, she was 4'11"-5'0" and R.I.P. Judy, she died too young. She was great in the Wizard of Oz.
4'11 girl said on 12/Aug/18
i dont thinks she is a full 5ft i give her 4.11.75
Sandy Cowell said on 26/May/18
Whether Judy was 4ft11, 5ft or even slightly over, she got her part in 'The Wizard of Oz' because of her shortness, which nearly always makes a young person look many years younger. She was 21 and still playing a little girl! Maybe she liked that being short gave her younger parts, that being the reason for her declaring 4ft11 for her height rather than 5ft.

There's an advert at the moment, reliant on CGI, in which Judy, as 'Dorothy', along with the others from 'The Wizard of Oz', are approached by the 'Wizard', who's on about mortgage acquisition! Dorothy is told she is 'much too young' for a mortgage, but we know differently, don't we? All she'd have had to do is to produce her birth certificate and take those plaits out!

I'm giving Judy 5ft as I agree she DOES look it!

Editor Rob
When you see Mickey and Judy together...I think they are closer in height than both of their respective claims seem to suggest.

Certainly the time I seen Rooney he looked like a five foot guy but was 80 or thereabouts.

@Rob, in 1967 though she would have been 45, two years before her death! It wasn't like she claimed that at 15 or something! I agree with you on nearer 5 ft though. At times she can look almost 5 ft 1! I think 4'11.75 is possible and she just went with 4 ft 11. Always looked taller than somebody like Veronica Lake.

Arch Stanton said on 11/Jan/15
Rob can you add Love Finds Andy Hardy, Babes in Arms, Ziegfeld Girl and A Child Is Waiting? With Mickey Rooney in Andy Hardy he was only looking a bit taller overall, in some scenes they could look the same, although she had a bit of footwear advantage. I think she looks taller than some of the ones like Veronica Lake etc.
Sam said on 12/Dec/14
Maybe a picture if you can find one to use, Rob?
jtm said on 10/Jul/14
why is she listed 5'0? she claimed 4'11 and that's what she looked.

[Editor Rob: I'm sure she had a 4ft 11 measurement, but I always thought she looked in the 5ft range more than under it when fully grown.]
Wishbone said on 9/Jul/14
There are certain movies that I label "must have" videos. The Wizard Of Oz is one of these. 5' Judy Garland was the DEFINITIVE Wizard Of Oz Dorothy,but that role is special,too,to her sister 5' Cathy Rigby. (When Cathy did a Wizard Of Oz tour in 1981,she met husband Tommy Mc.Coy!) Judy did great,too,in other MGM musicals,two WB movies,the 1954 A Star Is Born and Gay Purree,and scored great,too,in Judgement At Nuremberg. Then,on her What's My Line 1967 mystery guest appearance,before Bennett Cerf guessed Judy,Phyllis Newman asked Judy about if she did a weekly TV series. (She did in 1963-1964,but the constant format juggling and being up against Bonanza ended the run after 7 months.) But my favorite Oz character was Tin Man ("No heart,all hollow.") Judy's gone,but just like with Yul Brynner,Cathy Rigby,Raymond Burr,Rosalind Russell,and Sir Basil Rathbone,Judy will ALWAYS in my heart be Dorothy from The Wizard Of Oz.
littlesue said on 11/May/14
I have a pic of her with Natalie Wood and Liz Talor, she about an inch smaller than Natalie and 3 inch shorter than Liz which would be right as:
Judy 4ft 11.5
Natalie - 5ft 0.5
Liz 5ft 2.5

Arch Stanton said on 6/May/14
She didn't look under it to me either, although 4'11.5 is possible. She was robbed of an Oscar in 1954, I can't believe Grace Kelly's performance in The Country Girl was considered superior to Garland's in A Star is Born!! One of the worst Oscar decisions ever! Still, they got it right the next year at least with the actress in The Rose Tattoo.
ribeye said on 20/Apr/14
In the Barbara Walters interview, available on YouTube, Walters says how surprised she is to see Garland is so short. Walters has Garland stand up and Garland herself says, "I'm only four feet eleven". This is from Garland herself! Interview is found on YouTube; search "Walters interview Judy Garland"

I suppose she had to be pretty small to give Liza that impression, considering she isnt overly tall herself. So probably 4'11.5 to a solid 5' max would be reasonable.

[Editor Rob: I changed my mind on her after watching some older movies...]