American actress, best remembered for roles in films such as I'm No Angel, Klondike Annie and She Done Him Wrong. At times she wore extravagant sized shoes. One 1940's newspaper mentioned that "Biographical statistics give her height as 5 feet. 4 inches, but I doubt If she stands half an Inch over 5 feet" 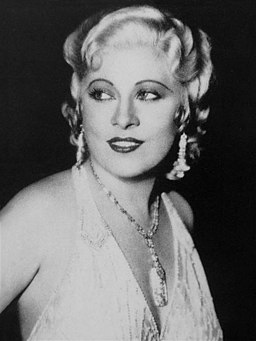 "The perfect measurement is bust and hips the same and the waist 10 inches smaller. Mine is 40 bust, 28 inch waist and hips about 39. I'm five feet four and weigh 128 pounds. I can go down to 124 when I have to. You know it isn't natural to have an itty bitty waist"

Actually, I'm only five feet five inches tall in my nylons, which is medium altitude for a woman, but I have tricks that fool people into thinking I'm one of those six-foot showgirls.

Average Guess (4 Votes)
4ft 11.81in (151.9cm)
Nik said on 29/May/20
It's interesting that she claimed to be 5'5".
Christian 6'5 3/8" said on 29/May/20
Geez, that's gotta be one of the worst height claims by a celeb I've ever seen.
Paul Wood said on 27/May/20
That's takes real nerve, claiming to be four or five inches taller than she really was.
Arch Stanton said on 25/May/20
Actually, I'm only five feet five inches tall in my nylons, which is medium altitude for a woman, but I have tricks that fool people into thinking I'm one of those six-foot showgirls.

LOL, and deluded. OK with camera angles and heels and shorter men at times she could pass for 5 ft 2 or 3 but watch any single one of her films and it should be very obvious she was on the short side, who exactly was fooled into thinking she was a 6 ft showgirl type!

Arch Stanton said on 25/May/20
My gosh she was "loose". She obviously found herself extremely sexy and God's gift to men. A lot of the time on screen she seems forced and putting on the sexiness. Funny somebody on one of her films said to her "I've never known a woman who had so many men", I think it was an in joke! Can resemble Barbara Windor and Dolly Parton in frame, no more than 5'.
RANDY J BROWN said on 24/Jul/19
proof you dont have to be tall to be a giant
Miss Sandy Cowell said on 11/Apr/19
But why, Rob, did she inflate her height so much? Do you think that she genuinely thought that her shoes and hats were all part of the package?
😂😂😂📦❓

Editor Rob
I believe she might have been calling her height in heels! That's what Jenna Jameson did too, gave her heel height rather than real height!

Miss Sandy Cowell said on 9/Apr/19
In one of yesterday's quizzes, probably an edition of 'The Chase', there was a question which went like so: "Who said 'It's better to be looked over than overlooked?'"

The answer was, of course, Mae West! It simply HAD to be, and I was so confident that it was Ms West that the other two options didn't even sink into my brain for a millisecond!

The bold'n'blonde Mae West looks no more than 5ft to me, so, because she had so many tricks to up her height anyway, I think it's fair to say that she was nearer a speck under, but I will give her 5ft regardless. Like Arch, I wouldn't have wanted to have a ding-dong with her either!
🗣️🙅

Editor Rob
I just realised I had a quote sitting in my big file of quotes from Mae and I added it at the top now. She gave 5ft 4 and 40-28-39 as her measurements.

These are the kind of shoes she was wearing:
Click Here
littlesue said on 26/Aug/14
She did look a bit vicious!! not that good looking either or a decent actress, the 'vulgar' acting gave her the career not any particular talent
Arch Stanton said on 26/Aug/14
Thanks for adding her anyway Rob! Can you add a photo and also mention My Little Chickadee and Myra Breckinridge? Well she was nowhere near 5 ft 4!! She looked a nasty piece of work mind and seemed rather vulgar, I wouldn't have wanted to have got into an argument with her!!
littlesue said on 26/Aug/14
Lucky to reach 5ft, she used to stand on a box for pictures and have an extra long dress on to cover it!
Arch Stanton said on 25/Aug/14
When did you add Mae? I requested this ages ago and didn't see it show up!! 5 ft range seems right, although could look taller in heels.