German professional footballer, who has played for Werder Bremen, Real Madrid and Arsenal. For his waxwork, he was measured in This Pose as 173cm. 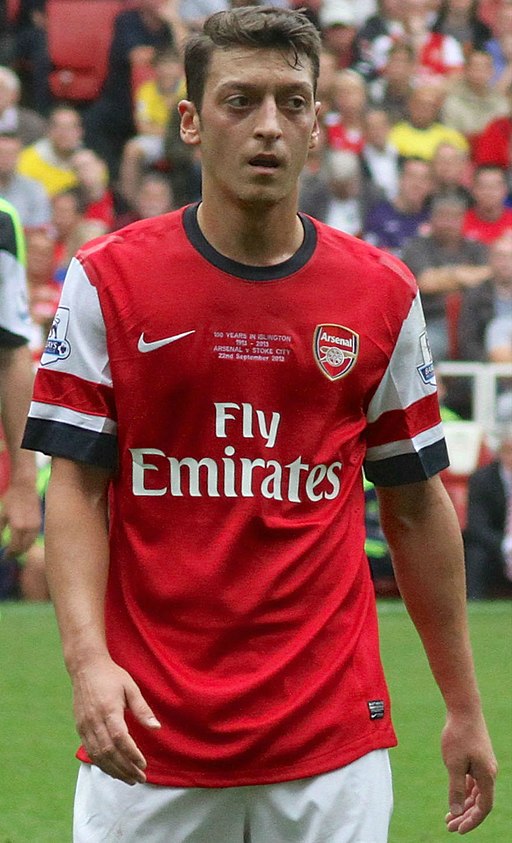 Average Guess (104 Votes)
5ft 10.1in (178.1cm)
Lancaster said on 29/Dec/20
He's not shorter than this list.
Tunman said on 19/Oct/20
Rob,he looks smaller than that he must be downgraded to 5'9 flat
Click Here He looks up to 5" smaller than Rose here but maybe this one is better
Click Here Well I don't think he looks less than 175 but I still see a solid 11cm minimum difference
And here's an excellent pic of him looking 3" smaller than Erdogan
Click Here
I feel his pose didn't make him lose as much as we did expect first

Editor Rob
Can look near 5ft 9 with Rose

Editor Rob
For his waxwork pose he was 173cm, but standing tall he'd measure a few cm taller at least. I don't think 5cm though.
Linke said on 16/May/20
@TwelveTER

Here's a picture of Ozil with another Bollywood actor, Ranveer Singh who claims 6'0

I am not familiar with Ozil but him being 5'9.5 doesn't look good for Ranveer's 6 foot claim. In Ranveer's defence, his posture at times is atrocious.


Que lo Que said on 24/Apr/20
He definitely doesn't look this height with ksi nor the 186-7 cm Aubameyang. He looks like a solid 179 to 180 guy. Definently a strong 5'10
TwelveTER said on 17/Jan/20
How much shorter does ShahRukh Khan look in this picture with Ozil?
Click Here

Editor Rob
That was some photos of Scorsese and DiCaprio, he looked a good 5 inches on Martin...but I take it This photo with Ozil, he's at least a couple of inches smaller, both leaning a bit and big hairstyles.

Here's a pic of them two together

Editor Rob
A chance of it.

2MeterPeter said on 21/Jan/18
Certainly above average, deserves half an inch more at least I think, but the 6ft listing on Google is ridiculous...
Johnson said on 16/Jan/18
with all the respect Rob, although it looks 1,73 in the paper of Tussaud, it is a wrong number of 1,78, for sure

Editor Rob
Tip of head in Pose is 173cm.

Of course how much he loses with his wax pose is hard to say exactly.

Could he have lost 6cm in posture...I suppose you can't rule it out entirely!

Here Wilshere with Oxlade beside him

Editor Rob: Johnson, the 5ft 8 pose is correct as the ruler is beside him, it's just a question of how much posture he lost.

Certainly not 3 inches, I tested a pose like that and I wouldn't hve thought more than 1.5 inches.

Ozil looks a little taller tan Kimmich in the anthem, although they are apart


j5 said on 28/Jul/16
Ozil and David Alaba are listed as 180cm and I thimk Ozil is taller than that or maybe the other way round, Alaba is shorter.
heightchecker34 said on 26/Jul/16
@spainmen191cm - nice! Yes, I'm glad he started to add a few models, although more males would be greatly appreciated! My favorite is David Gandy whom Rob added at 6'2, which shocked me because i always believed the 6'3 claim, but he is right. I wish he would add Jon Kortajarena, Sean O'Pry, Tyson Ballou etc.. if you have time i would love to go over what you think those models and others height wise look... my guess is J.K- 6.1'5, S O'Pry- 6'0, T. B- 6'1. what do you think?
Lmeister said on 26/Jul/16
Maybe the Mesut Özil 177cm listing is a bit too low. Since Douglas Costa is 170cm -> Mario Götze is 171-173cm and Özil is clearly taller than Götze. Özil looks 3-4cm shorter than 182cm Podolski. I think we need a pic of Özil and Joshua Kimmich 176cm.

Editor Rob: I think the pose he was in did take at least 1 inch, and probably about 1.5 inches, I did test out a pose like that and thought 4cm difference might be possible to how he would measure standing his tallest.
height man said on 25/Jul/16
Next to Messi Gotze looks 174cm
176cm seems a stretch

But boy I think it's curious
Ozil at 5'9.5 seems normal, sometimes tallish on the field playing with the germany national team
Gotze, who must be 172-175cm looks so much shorter

Like when i saw gotze entering the wc final i thought 'boy is he short'
But with Ozil I have never had that thought, not even once

spainmen191cm said on 21/Jul/16
@heightchecke34
My favourite male model is Francisco Lachowski, he is already in this page Rob has him at 190cm
height man said on 21/Jul/16
i saw some pics with cr7 and he is a strong 5'9 man
but i wonder how tall mario gotze is
mrtguy said on 20/Jul/16
I thought he was like 5'10''
heightchecker34 said on 20/Jul/16
hi spainmen 191cm... who is your favorite male model? He is right rob, if you have more time, it would be greatly appreciated if you can add some more male models, and models in general.
Johnson said on 20/Jul/16
@Chris Paul Hair does not count in hair. It is obvious. Doctors flatten your hair when you are being measured. If not Fellaini could be 2 meters tall with Afro and 193 cm if he shaves his head! Height is barefoot and not faking it with hair
Chris Paul said on 20/Jul/16
Hey Rob quick question.. do you think hair would count as part of height? I ask this because I actully met Mesut Özil last year at the working at the Emirates Stadium.. I'm 6"3 barefoot (190cm) 6"4 in shoes .. Özil's hair was up to my eyes he looked 5"11 with his hair and shoes.. maybe he's a legit 5"10? He has like 3 inches of hair and I'm bald.. If I grow 2 inches of hair would that make me 6"5? ..