Finnish giant. When he was inducted into the army he was 7 feet 3 inches, and grew to 8ft 1.25 inches. In the 1970's Guinness Records noted he "may have stood 8 feet 3 inches at one time". The highest he was ever billed in the press was 9 feet 1 inches. 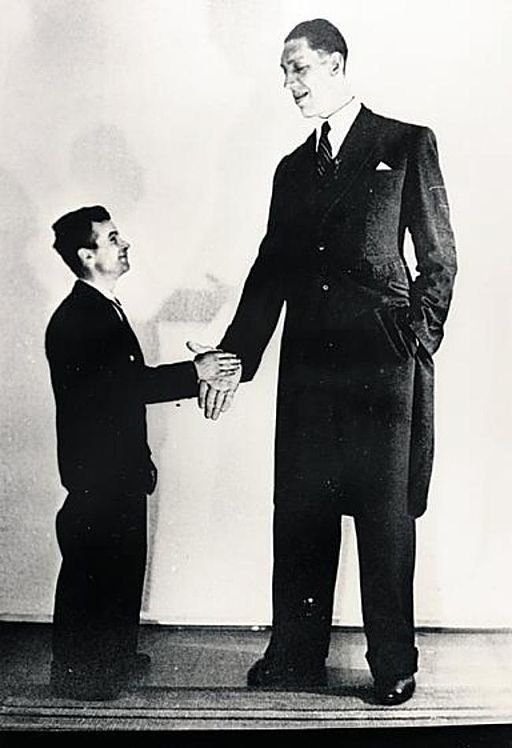 Average Guess (23 Votes)
8ft 3.2in (252cm)
Nippu said on 1/Jan/21
Yes. Think Vaino`s hands are at that time biggest in the world. Ever. But as you can see he had small feet compare his size. Only 58-62 european size.
Robbe said on 30/Dec/20
Nanni Toije says also in that radio clip that Väinö's birth weight was 6,5kg, and height 60cm. Compared to Wadlow's 3,8kg/51cm there's quite a difference. So Väinö was already huge as newborn, while Wadlow was just average sized.

Nanni is most likely there with Väinö, so that's how 170cm looks next to 248cm Click Here

Nippu said on 26/Dec/20
Yes iit is. It is on Swedish but last words he say in Finnish to say hi his relatives in Finland. That was pretty cool. I can understand Swedish also so this was treasure to me.
Robbe said on 22/Dec/20
P.S. That radio clip i believe is the very only one recording where we can hear Väinö speaking. So it's pretty rare treasure. And the interviewer is a she of course.
Robbe said on 20/Dec/20

Väinö speaking few words here in Swedish radio back in 1944. He is speaking Swedish and Finnish language. The interviewer says Väinö's head is minimum 40cm, which is 15,7in. So it's really much bigger than 12 inches. Interviewer also says Väinö's reach is 265cm.

The interviewer says he is 170cm. Im not sure if he is in the pic there with Väinö.

Väinö's head must be at least 12in?

I put average 9in head to the guy on the left.

Editor Rob
close to 6ft is possible for the guy on the left, Vaino's head looks quite long in comparison.

J2Frenzy said on 9/Nov/20
How tall is the guy next to him? Because there’s no way of knowing if Vaino was average and the dude next to him is a midget

You're the man! Thanks for the info. Yes, as much as we would like, photos of contemporary giants together are uncommon because, as you said, the height exaggerators would be quickly found out.

Vaino and Wadlow's life times overlapped from 1918 to 1940. Though I understand Vaino was still growing as at 1940, what a meeting of Giants that would've been with photographical evidence to go?

Nippu said on 28/Mar/20
Vaino was married 1942-44. Around 2 years. No kids. Vaino`s roots go to Paltamo. Same area have been also Daniel Cajanus and Louis Moilanen. Atleast Cajust is related from mothers side. There was also veveral others 220-228cm tall giant like srtongman Rauvan Jaakko (228cm). Myllyrinne` family are all normal size. I know that his later relatives is tested for gigastism. Do not know how many. I only have met one. Ville Myllyrinne. Famous actor/comedian in Finland.

Vaino was probably most strongest and mobile giants ever. Atleast over 7`7+ giants. He also speak around 6 languages. He was pretty rich also. People really pay to him that they could meet him. Even privatly. Other giants did not like to tour with him.Well they managers refuse when they had met Vaino. In that era 7ft+ humans mostly tell they are half over even full foot taller. If u are tall enough u don`t have to lie.

Tall In The Saddle said on 25/Mar/20
Thanks Nippu.

Yeah, I've checked that link before. I thought you might've found a "free" path to the same video. I am a cheap skate. LOL.
I don't know if you've mentioned it before, but did Vaino marry, have children? Also, did he have any siblings and was there any instances of extreme height among his relatives, were his parents of average size?
I think a lot of claims of great strength associated with "giants" are likely untrue or at least exaggerated. Many of them are compromised health wise anyway and the bigger you get, P4P strength diminishes but I guess their absolute strength is still noteworthy. HOWEVER, claims of Vaino's strength appear to be better substantiated in its own right and he did look very strong, able and well proportioned, unlike a lot of other "giants".
Nippu said on 19/Mar/20
I will. Document about Vaino.. Only problem is that it cost couple dollars. I`ll send link anyway. Click Here

The doll which Actually look horrible has Vaino`s actual clothes and shoes. Last year they found 3 pairs of Vaino`s shoes and his skiis and some other stuff. His sister`s former house.
Tall In The Saddle said on 9/Mar/20
@Nippu

Thank you. The WW2 footage played fine. If you are able to link any further footage of Vaino it would be very much appreciated. He deserves the exposure.
Nippu said on 20/Jan/20
Click Here Hope u can see this. Myllyrinne early 1940 working at winter war 2. He did hard work and minimun height at that place to work was 180cm and must be really strong. There is more somewhere about him but i must find it again.
Nippu said on 19/Jan/20
Click Here

In this video from vienna he look around 7`10 not 8`2 but was still growing. And only at the end in the ship he meet a lot of small people. Example pause video around 0:22. We did find (around 10years back) that ship`s height. Not this boat but similar. Top of the roof was more than 230cm so Vaino is atleast 7`10 or even 8ft in this video. He was growing all the time slowly so it is hard to tell exatly how many centimeter he was at that boat trip.

Editor Rob
Some photos he might not have been at fullest height, but there's a few out there he looks well over 8ft
Nippu said on 23/Feb/19
Thank you Rob =)
Nippu said on 10/Feb/19
Why not picture here? There are lot of pictures about Vaino.

Editor Rob
There is one from wikimedia now.
Tunman said on 21/May/18
@Robbe
Yeah around 70cm difference I thought,but it's hard to tell when there is such difference.
Nippu said on 19/May/18
I allready solved this. I met a doctor who measured Vaino after he was dead. He was 251,6cm tall lying down but his knees was just a bit bended. So he said his "corrected" height would have been about 255-257cm tall. Some spinal damage but not much. But measured he was 251,6cm. He also was still growing at the time. Not much but little. He could have reach 260 cm if he would last 8 more years.
mrtguy said on 10/May/18
Rob, just being that tall without crutches is very scary and I'm sure his head 4 times the size of an average man
Robbe said on 21/Apr/18
I think that guy with Väinö is around 180cm. Here Brahim (246cm) with some 190cm guy.

Daniel Cajanus was much shorter than claimed. At least the 1981 and '82 Finnish editions of GWR mention that according to Car Langer's measurement of his right femur in 1872 that could have been 222 cm at most. The Tallest Man website mentions that his height with shoes was marked at 7'4¼" on a pillar when he visited England in 1741 and 1742, and that's the height they use. Click Here Strangely many Finnish sources still use the higher claims, even though they've been never recognized by the Finnish edition of GWR

Tall Sam said on 29/Mar/18
Wonder what he weighed, he looked to be somewhat less slender than many of these giant gentleman.
Robbe said on 29/Mar/18
Väinö's mom was from Paltamo, where lived also a giant, Daniel Cajanus(1703-1749) who reported to be 247cm. He may have been even taller than Väinö. Highest billed height was 283cm for him. So it's arguable which one was taller. Anyway, quite a coincidence!

Saw an old film where Väinö was working in his daily job, hammering something with his coworkers. Väinä had a huge, special made sledge hammer. Others used normal sledge hammers, which looked like toys compared to Väinö's one :D

Tall In The Saddle said on 28/Mar/18
Nippu - careful what you so long wished for - it's now your sole responsibility to populate Vaino's page with as much information and photos as you have at hand. Lol. I'm joking.

You mentioned Vaino's uniform, here it is in the Artillery Museum of Finland -Click Here

I have some measure of Swedish genes from well up in the ancestral line but unfortunately I don't speak/read Finnish. However, in the accompanying text I can make out 1929 and 226 cm = 88.976" = about a few hairs under 7'5" at age 20. Not bad. Later in the article I see 247 cm which pretty much = 8'1.25" the measured height Rob has listed at the top of the page - that measurement was made in the year prior to Vaino's passing I believe when he was about 53 yo. I also see further down again 251.4 cm which is 8'2.98" pretty much the 8'3" that Vaino was guessed to have stood at one time. Though not officially measured at 8'3" I think it's a reasonable reverse extrapolation from his final measurement at a later and likely height deteriorated age.

Nippu said on 28/Mar/18
Yep! Time is my enemy. I have run my own firm/firms. So i try to get some holiday to do that.
Nippu said on 27/Mar/18
Rob. I have tons of information about Myllyrinne. More than any websites. Perhaps i can find that info for you? I have not even read all off it.

Editor Rob
It's certainly worth documenting if you have time.
Some Guy said on 27/Mar/18
I saw his uniform in the military museum in Hämeenlinna and it was unbelievably huge! When I was in the army, the tallest guy in the company was about 6'8 and even he would have looked tiny next to Väinö.
Nippu said on 27/Mar/18
Finally. Thank´s Rob. I have waiting this maybe 10 years or maybe more???

Editor Rob
Well, never say never...I think Vaino was one of the few in the 8ft range who seemed to not suffer as badly physically (in movemement/posture terms) as other giants.

It would be interesting to see how long his head was, in photos I would have guessed well over a foot long.