Nelson Frazier, Jr. was an American professional wrestler who wrestled under the title Viscera. He was billed as 6ft 6 and up to 6ft 9. 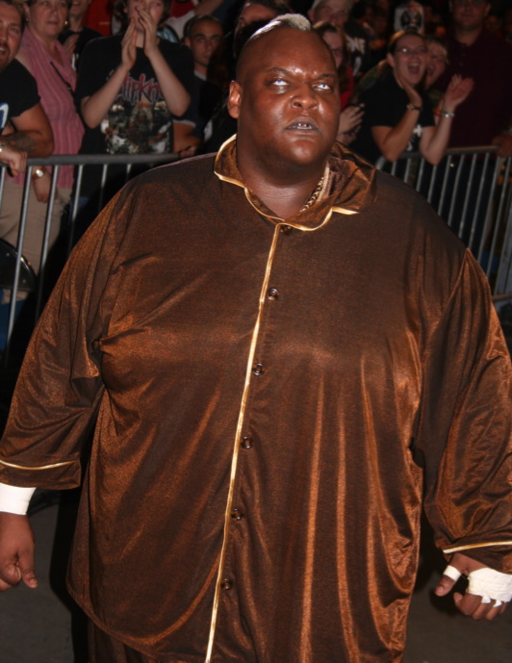 Rampage(-_-_-)Clover said on 4/Jul/20
Anywhere 6ft6-7 for this dude.
Estim8r said on 2/Jul/20
Not so Big after all, guess they gotta change it to Average Height Daddy V
Hanov said on 11/Jun/20
His brother is listed 6'1.25. Big Vid had good genetics
Kane99 said on 5/Jun/20
He doesn’t look 6ft6 1/2 with young taker
Click Here
A good an inch shorter and viscera was in very good posture.
And next to old kane who was no more than 6ft7 in this moment
Click Here
Looks at least 3/4 of in inch taller, even a bit more. So rob if sid is 6ft6 1/4 even viscera didn’t look taller than that

Kane99 said on 22/May/20
Rob
You always listed sid taller than viscera because he gave a taller impression.
Click Here
Click Here
Do you really think that he’s taller than Sid ? Always looked at least an inch shorter than taker and in some shot over an inch

Editor Rob
Viscera might be one wrestler when compared with Sid, who has a looser posture due to his weight. I can see how people would say he could look 6ft 6 range at times.

He was taller than Sid, with good posture of course

Editor Rob
For a peak I doubt he was just a flat 6ft 6, but over it...how much is debatable though.

Deathvalley99 said on 8/Jan/20
Big viz needs a downgrade mr. Robert Paul! Always looked an inch shorter than the undertaker but he was in clearly footwear advantage, therefore when came face to face with kane which he used the same kind of boots, kane can look near 6ft8 next to viscera.
Xpac99 said on 21/Dec/19
Click Here
How was the difference between viscera and taker in this pic, considering that viscera was in footwear advantage in that moment?
Neville said on 2/Sep/19
Click Here
Kane-viscera
Click Here
Kane-snitsky
Rob if viscera is 6ft6 1/2 how tall is snitsky in this staredown?

Editor Rob
Kane can look near 6ft 8 with Viscera

Editor Rob
He could seem over an inch smaller there, though he was dazed and wobbling about a bit from all those hits.
mohammad said on 25/Jan/19
Big Daddy's real height = 6'6"

He did look massively tall in person but I am going by when I was 12 years old and met him outside our public school.
Demon87 said on 13/Dec/18
6ft 6 1/2 big Rob seems too much.. complitly shorter than kane
Click Here
Click Here
Click Here
And about the same height of sid eudy, but in huge sole boots..
Maybe the same height of corbin, not more
Sotiris Gravas said on 11/Nov/18
Here's a nice pic of a Viscera/Kane... staredown... Click Here
Sotiris Gravas said on 10/Nov/18
Here's 6'6" Viscera (closer to camera) w/ Jesse Jackson (was 6'3" peak height):
Click Here

Zampo said on 22/Oct/18
6'6 range. I actually found him pretty scary during the whole ministry of darkness period. His "World Largest Love Machine" gimmick was pretty entertaining though. RIP big man.
Xpac99 said on 29/Aug/18
I think that you possible upgrade sid height at 6ft 6 3/4
Click Here
Xpac99 said on 12/Aug/18
In your opinion rob a Train (matt bloom) had the same height of viscera ??

Editor Rob
Bloom at 6ft 6 range is ok, but at 6ft 7 I'm not sure he's as tall as that.
Magic said on 13/Jul/18
Kane was probably 6ft 8, because in every staredown with viscera looked taller... in my opinion kane had about the same height of viscera withuout the footware and the foreste of viscera is huge 3/4 cm minimum . 6ft 8 for kane is very possible but rob still not sure
tree said on 1/Jul/18
Viscera had thicker shoes when he fought Kane
James B 171.5cm said on 14/Jun/18
rob do you think kane has been 6ft7 flat for many years? i say that because he looks similar in height too viscera.

Editor Rob
It's still arguable at times that he wasn't that much over 6ft 7, which is why he can seem 6ft 7 I suppose with viscera.
Xpac99 said on 25/May/18
Click Here
Same height ?

Editor Rob
Kane could have the edge there.

Editor Rob: his weight is anything but normal.
Leonardo 1.73m said on 12/Aug/16
Rob please, Can you convert this page to a page of Viscera ? All comments are of him.
Rest in peace

Red said on 27/Jul/07
mike m where are the 2inches? Stop the vid at 8.00-8.02, UT is max 0.5"-1" taller.
justin said on 28/Jun/07
viscera is 6ft6 no more, kane is 6 ft 8, undertaker 6ft7, big show 6ft10.5, the imposter kane 6ft6-6ft7
Gollum said on 6/Jun/07
Viscera is 6'7 by my estimations around 480 pounds.
mike m said on 30/May/07
imo i see at least a 2 inch difference,taker looks about 6'8",Viscera looks 6'6".
Paul said on 28/May/07
How do Taker and Big Viz compare ?
Click Here
Alex said on 11/May/07
Viscera I say is 6'6 and 475lbs.
Viscera Fan said on 24/Mar/07
Viscera is 6'6 no taller. I met him at Halloween Horror Nights in Orlando in 2001. I chatted with him for about 5 mins. No one really knew who he was but I was shocked to see him in line infront of me and my now ex-girlfriend. He did seem so much taller than I thought. But he confirmed for me that he is almost 6'7 but 6'6 is his real height.
GORO said on 18/Mar/07
There was a Royal Rumble were VIS towered of Rakishi by about 5 inches or more when they faced off. Does anyone know what I'm talking about or have a picture of it to post up. (I believe it was the Royal Rumble where the Rock won with Big Show lasting at the end with him) Big Vis 6'6-7 barefoot no less.
hry7 said on 2/Mar/07
I give him a strong peak of 6'7.5 bare feet, 6'9 shoes.
Danimal said on 16/Feb/07
I give him 6'6" Viper. Nash didn't tower over Viscera at the 1995 Survivor Series. Viscera (Mabel at the time), stood his ground next to Nash and was only 1-2" shorter than Taker in the mid to late 90's.
Viper said on 14/Feb/07
Viscera is closer to 6-5 than 6-8.
BGKing said on 13/Feb/07
I think Viscera is closer to 6'8.
mike said on 1/Feb/07
big vis looks 6'7" around 2 inches taller than ben.
Alex said on 4/Jan/07
Viscera is 6'6-6'6.5. I think thats the most accurate that most will agree on here.
Warlord said on 26/Dec/06
I'd definitely give Viscera 6 foot 7 and 1/2. He compares well to the 6 foot 8 -1/2 Undertaker and also certainly looks taller than this 6 foot 7 Starks character and this Starks character is definitely a solid 2 inches taller than the 6 foot 5 Rothleisberger.
Alex, why pick on JR. The announcer's are told to say crazy things. I've seen JR even differ a lot with the announced weight when a wrestler walks out. He isn't the WWE official source. Jesse Venture always used to say wacky stuff too when he was an announcer.
Warlord said on 26/Dec/06
Danimal,
I'm not sure if I understood you correctly, but did you say (Oct 9/06) that HHH is shorter than Vince McMahon? If so, you're not as smart as I thought you were. That's is ridiculous. If I have misunderstood you then I apologize.
Alex said on 18/Dec/06
There was a good picture of Starks and Viscera but not sure where I can find it now. Its a photo section of him backstage at Raw. Starks is 340lbs and Viscera would have 100lbs or more on him because Starks has more muscle than Viscera so Viscera could easily have more weight on him than you think because muscle weighs more than fat. Viscera looks at least 450lbs to me too. Comparing him to 415lb Big Black has me give Viscera 450-460lbs.
Viper652 said on 15/Dec/06
Looks like Starks is trying to hold Ben back from going at it with Viscera.
Jason said on 15/Dec/06
It's impossible to tell from that pic, man. Starks' measured height is 6'7.1''. Don't think Viscera would have 110lbs on him ... that's an astronomically enormous weight difference.
JT said on 15/Dec/06
WWE has another photo of Viscera with Big Ben and Max Starks where Viscera looks at least as tall as the 6'7" or 6'8" Starks, even considering the angle. (Click Here) Hard to tell what Viscera weighs with the baggy clothing. He has to be at least 450 lbs.
Alex said on 13/Dec/06
On Raw this week JR was like Viscera is 6'9-6'10. JR blows things out of proportions a lot. I remember once he said Albert was 6'10.
Alex said on 12/Dec/06
Here are pics of Big and Rob, tough to find many of them but found a few here at the bottom of this page.

I'd say Viscera is 6'6. Last year I believe it was, JR said Viscera was 7'0 and this is when Viscera was right in the ring with 6'3 Coach and only had Coach by 3 inches.

Would be funny is hockey listed their player's heights in skates. LOL

Danimal said on 13/Oct/06
Hockey is also very accurate Vipe.
Viper652 said on 12/Oct/06
"I've been to many sports shows and the athletes always look the size they are billed,"

I met a few pro baseball players a few weeks back and just about all of them were at least 2 inches shorter than their billed heights, and a couple up to 4. This is just pro baseball. Wrestling is even more cartoonish. Pro football is the most accurate, but still fudges on some.

DKKO, you really should think before you talk. Vince is still shorter that 6'3.5" Hogan. He's MAX 6'2". HHH is even shorter.

I'm not suprised Mo looks taller in person, he had a very rotund build.

Frank said on 13/Feb/06
Jason, Mo was about 5ft 11 but he looked shorter on TV..
Jon Smith said on 12/Feb/06
wow look at big ben dominate triple H
J-Dog. said on 12/Feb/06
How tall does John Cena look to you guys, I can't beleieve people are throwing around that he is 5'11" et cetera...he DOES not wear lifts, some claim that "well he wears basketball shoes" sorry but I dont care if they give 1.5" advantage it doesn't qualify as lifts, hell unless you are wearing addias superstars, sandals or chuck taylors you are going to get a height advantage from shoes.
Goro said on 12/Feb/06
He's 6'6 0r 6'6 and a 1/2 I met him at the mall in Albany And I'm 6'3 he was taller than me. Plus The coach definetly wears lifts. Why? Well he looked very short next to the 6'7-6'8 Max Starks but Viscera look to be as tall or a little shorter than Starks. Coach wears lifts when he knows he is going to be in the ring. Coach without lifts is 6'2 with he's probably 6'4 with lifts. Plus about 4 or 5 years ago Viscera went face to face with Rikishi and he was a head taller than him. It was at the Royal Rumble were The Rock won. So someone please find a picture of Vis and Rikishi at the Rumble
Frank said on 12/Feb/06
Rob,Jason said that Vicera was 6ft 5 but as you can see Vicera & Max are very close in height.....Big Ben looks like he on his Tippy toes or something because he is jokeing around trying to look as tall as them....In the other Pictures Max is clearly Taller than Ben....Do you agree with me Rob ??

[Editor Rob: to me either 6ft 6 in that pic actually looks about the best mark, but it is unknown what Ben is doing]

Jason said on 12/Feb/06
He only appeared similar in height because Starks is slightly further back.

[Editor Rob: worth posting this pic again on viscera's page: