American actor best remembered for roles in films such as Gunga Din, The Prisoner of Zenda, Sinbad the Sailor, Little Caesar, Angels over Broadway, A Woman of Affairs and The Dawn Patrol. In the 1930's he was described in the press as both 6ft and 6ft 1 with a weight of 170 pounds. In his book "A hell of a war" he mentioned "I am six feet" and in biography - "The salad days" - mentioned his height more specifically: "I stand six feet and a bit" 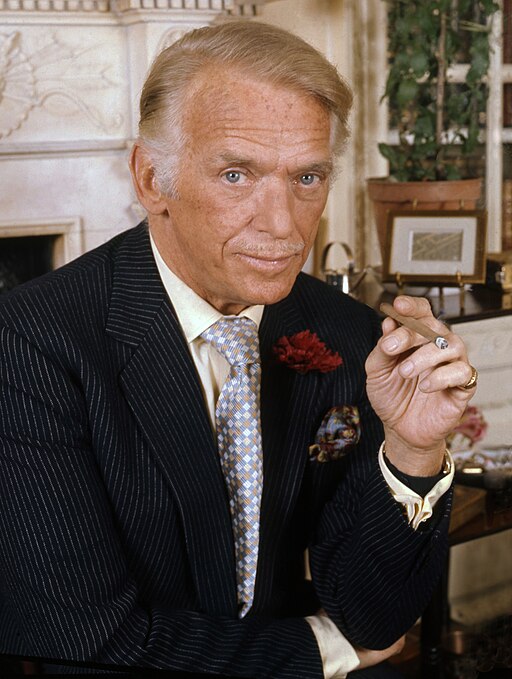 Editor Rob: Rampage, at times I think Fairbanks Jr can give a slightly taller impression.
Steve said on 11/Dec/14
In the photo with Hudson and Peck he's satnding behind them with the camera photographing upward. He really doesn't look that short considering. I think a solid 6'1" in his youth. And dropping down by perhaps half an inch by the time of that photo. So Hudson at 6'4" was three and half inches talker while Peck was two and a half inches taller. And that's just about what I see in that photo.
Sam said on 10/Dec/14
Between Rock Hudson and Gregory Peck, he looks under six foot maybe but is older possibly with height loss and is not as close to the camera as the other two.
Click Here
Sam said on 3/Dec/14
Here's Jr. with his dad, looking about 5-6 inches taller.
Click Here
Sam said on 1/Dec/14
The same is true (not having a pic on his own page) of Errol Flynn.
Arch Stanton said on 1/Dec/14
Rob on the "you might be interested in" thing above there's a photo of Edward G. but not one in his article. Can you add one? The 5'4.5" also needs looking into!!

[Editor Rob: I've still to look at his height again, but I'll add that photo on his page.]
Arch Stanton said on 1/Dec/14
Good to see it up!! Yeah I think he looked a bit shorter than Massey and about the same height as Reagan. 6'0.5" I think is the best listing, although sometimes he could look nearer 6'1".
Gonzalo said on 1/Dec/14
He looked tall, around 1`85, unlike his father. There are pics of him next to very tall people like Rock Hudson, Gregory Peck or Jeff Goldblum and Fairbanks doesn´t look very short next to them
Sam said on 1/Dec/14
This listing fits him pretty well. Good to have another father & son pair on here.
Celebrity Heights A-Z
A
B
C
D
E
F
G
H
I
J
K
L
M
N
O
P
Q
R
S
T
U
V
W
X
Y
Z
Random Celebrity
Latest Star Heights