British Actress and politician best known for films such as A Touch of Class, Women in Love, Sunday Bloody Sunday and Hedda. In Star News (Feb 1971) she said: "I was virtually a dwarf until I was about 14 - then I shot up. I'm five foot six and a half now.". 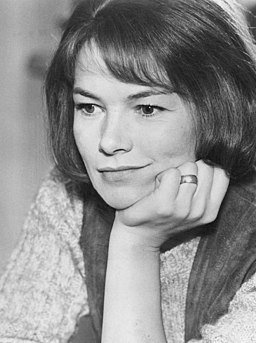 Found a quote from her:
"I was virtually a dwarf until I was about 14 - then I shot up. I'm five foot six and a half now."
boswell said on 22/May/09
I spoke to her briefly in Toronto when she was doing MacBeth with Christopher Plummer (late 80's?). I'm 5'8" and and I think she would be no taller than 5'6" and possibly as short as 5'4". Very impressive person. Intense like a jungle cat.