American actor, best remembered for roles in films such as Calamity Jane, Seven Brides for Seven Brothers, Show Boat, Annie Get Your Gun, The War Wagon, Ride, Vaquero!, Kismet, Kiss Me Kate and The Big Fisherman and TV series Dallas. In the tribune-review, he was quoted as saying: "I'm 6-foot-4...Janie Powell is only 4-foot-11 and Kathryn Grayson about 5-foot-1. They were always standing on a box, or I was in a hole." He also mentioned in his book 'Only make believe' "I stood 6 feet 4 inches and weighed 180 pounds" and also said "my 6-foot-3-inch frame". 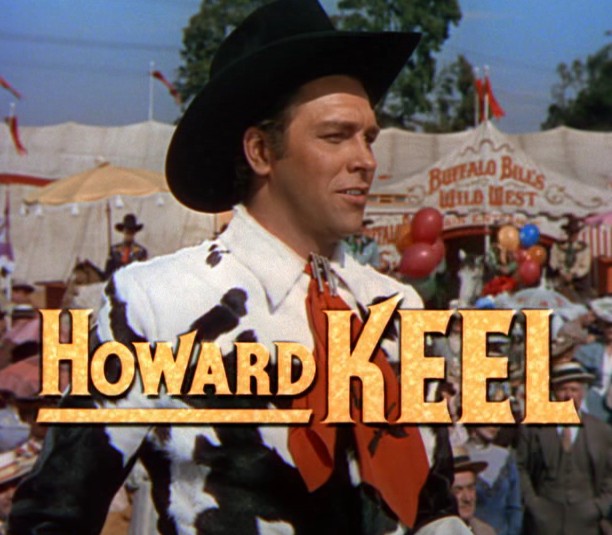 All other listings I am aware have him at 6'4", including this site. Most importantly for me, no matter how he is listed, Mr Keel looked every inch of 6'4" and is as reliable at that height nomination as Vincent Price IMO.

Not a fan of musicals at all but still well aware of the talent and presence of this guy who also starred in the John Wyndham classic THE DAY OF THE TRIFFIDS.

Editor Rob
In 1980's and 90's 6ft 3, but over that for his peak, 6ft 3.5 maybe is a possibility
Anonymous said on 11/May/16
I think he's as solid a 6'4" as it gets. Especially compared to Julie Newmar in 7 Brides. Julie (listed at and claimed 5'11") often destroyed other people's height claims. One time on What's My Line, she walked barefoot on the show because she had twisted her ankle, and barefoot, Julie was taller than 6'1" claiming John Charles Daly and 6'1" claiming Bennet Cerf, both in dress shoes. Howard Keel looked absolutely nothing less than a solid 6'4" next to Julie. She had flats and he had boots and looked more 6'6" in comparison, so that would translate to a solid 6'4".
Sam said on 6/Apr/15
He looks like he's in Robert Mitchum-esque film noir in the photo, would have been interesting, wonder how Keel could have held up in such a film.
Arch Stanton said on 1/Mar/15
Yes, he looked about as honest a 6'4" as you could get I think.
Arch Stanton said on 27/Feb/15
Rob can you add a photo and add Annie Get Your Gun, The War Wagon, Ride, Vaquero!, Kismet, Kiss Me Kate and The Big Fisherman? Yes Gonzalo, I think he looked a legit 6'4" with Louis Calhern.
Gonzalo said on 14/Aug/14
Very big guy. He looked huge in Seven brides for seven brothers. Looked as tall as John Wayne in The band wagon. 1`93 sounds correct for him.
Arch Stanton said on 28/May/14
Show Boat, forgot about that one. Any of those will do.
Arch Stanton said on 28/May/14
Actually can you add best remembered for roles in films like Calamity Jane, Seven Brides for Seven Brothers, Showboat, Annie Get Your Gun, Jupiter's Darling, Kiss Me Kate, Waco and The War Wagon?
Arch Stanton said on 28/May/14
Rob can you add Seven Brides for Seven Brothers? Looks 6'3"-6'4 in it, big guy.
Mrs Delaney said on 20/Feb/14
I met Howard Keel & Jane Powell at Wolf Trap, outside D.C., when they play in "South Pacific." I am 6 feet tall. Howard is definitely 6'4" and Jane 4'11". They were always my two favorite singer/actors.
Knowitall said on 7/Aug/13
In the film Callaway Went Thataway, Keel was at least a couple of inches taller than Fred MacMurray who was supposedly six three. But then Keel was wearing cowboy boots and MacMurray regular shoes. I believe six four is correct.
Arch Stanton said on 5/May/13
Does look near it in Calamity Jane. I guessed 6'3".
rebelpeter said on 11/Apr/13
6.4 sounds right to me a great singer tooo
princessa said on 3/Jul/11
Just finished watchin "Annie Get your Gun" and remebered that at 7 years old I feel in love with this tall, gorgeous hunk. He never achieved what he should have in Hollywood when musicals became passe. Such was the loss for all of us until Dallas. But the old Howard Keel was gone with the wind.
rebel peter said on 15/Apr/11
Howard Keel was a wonderful singer with a powerful great voice I liked him in 7 brides for 7 Brothers and was one of the first films I saw him in he was great in Calamity Jane too and being so tall really always looked the part for the films he stared in , a truly greatly missed first class actor. . . Reb . . .
Jordan said on 2/Nov/06
HE is a true tall person. In movies he looks 6'5, but 6'4 at least
JJ said on 5/Sep/06
Iam 6'5 i met this dude and he was lil bit shorter then i am he is a legit 6'4.
Anonymous said on 15/Mar/06
He was as tall as John Wayne in The war wagon, so 6`4 sounds reasonable.
Tommy P said on 31/Jul/05
I was on a plane with him in 1978. I'm 6'3" and I thought he was 6'5" or taller. He was an imposing man. Tall, big shoulders, and brilliantly white teeth.
Celebrity Heights A-Z
A
B
C
D
E
F
G
H
I
J
K
L
M
N
O
P
Q
R
S
T
U
V
W
X
Y
Z
Random Celebrity
Latest Star Heights