American actor best remembered for roles in films such as The Searchers, King of Kings, A Kiss Before Dying, Princess of the Nile, Count Five and Die, The True Story of Jesse James, Hell to Eternity, The Last Hurrah and The Christmas Kid. On TV he is best remembered for playing Captain Christopher Pike in Star Trek. On a Publicity Bio his height was listed as 6ft 1 and weight as being 180 pounds. 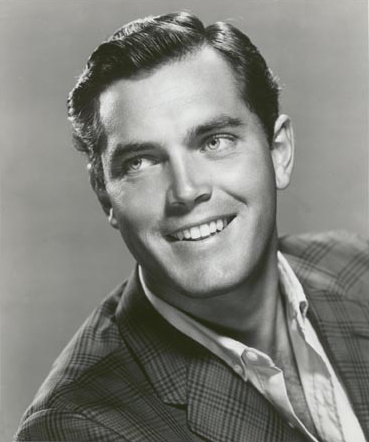 Average Guess (3 Votes)
5ft 11.33in (181.2cm)
Rampage(-_-_-)Clover said on 25/Dec/20
Arch, in fairness he actually looks close to it with Wagner...
Tom said on 5/Jul/16
Hunter was an inch taller than Robert Wagner and two inches taller than Brad Dillman. Click Here
Arch Stanton said on 23/Jan/16
Archived link helps yup. Agreed he didn't look 6'1, had to have been a shoe measurement.
Arch Stanton said on 23/Jan/16
Actually I think mention The Last Hurrah instead of Brianstorm, a more notable one.
Arch Stanton said on 23/Jan/16
@Rob, can you add a photo and add films like The Searchers, King of Kings, A Kiss Before Dying, Princess of the Nile, Count Five and Die, The True Story of Jesse James, Hell to Eternity, Brainstorm and The Christmas Kid. On TV he is best remembered for playing Captain Christopher Pike in Star Trek.

Editor Rob
that old link I had was dead (which happens to most weblinks over time), but there is an archive copy of the file which I linked to.
Sam said on 3/Dec/15
Yep, he did look right around the six foot mark opposite Wayne in The Searchers.
Chase Witherspoon said on 22/Aug/15
He looked only an inch shorter than Ty Hardin in Custer... reckon he'd have been close to 6'1"...
Jake: 1.84 m- 1.85 m said on 25/Oct/14
Agreed, Arch. I think Hunter was 6ft, maybe 6ft 0.5in! The Searchers is just such a superb film, too.
Dan said on 26/May/13
Arch...I agree, and he looks even with Nimoy in "The Cage", and Nimoy wrote in his autobio that he is also 6'0".
Arch Stanton said on 22/Nov/12
John Wayne had 3-4 inches on him in the Searchers, About 6ft.
Shadow2 said on 2/Jan/11
In the mid 1950's "A Kiss before Dying", Hunter is 3" shorter than 6'3" Howard Petrie, an inch shorter than 6'1" George Macready, and the same height as Robert Wagner who was just on 6' then. Hunter was a fine actor whose life was cut short by a tragic accident.
guyfrommars said on 9/Jun/09
He wore 2-inch heeled boots in "The Cage", but Nimoy did the same.
D-Lurker said on 28/Oct/07
He does appear a little taller than Leonard Nimoy in the pilot episode of star trek "the cage"..so 6ft1 doesn't seem impossible.
Gramps said on 14/May/06
I just finished watching Hunter and Robert Wagner in "A Kiss Before Dying" (1956). The 5'11" Wagner looked at least 1/2" taller than Hunter.

[Editor Rob: ah yes, wagner has been described at 6ft in the past and might have been, but I'd forgotten about this hunter fella...for sure, also in the last hurray I think, at least the one he done with tracy he looked shorter]